The Supreme Court has issued a summary Order (h/t @JamieDupree) vacating the 4th Circuits decision in the Obamacare case brought by Liberty University. 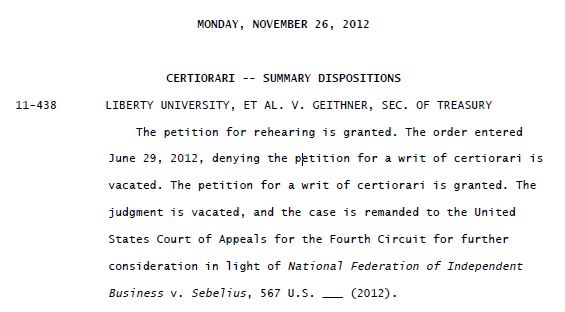 The Supreme Court on Monday arranged for a Virginia university to go forward with new challenges to two key sections of the new federal health care law — the individual and employer mandates to have insurance coverage. The Court did so by returning the case of Liberty University v. Geithner (docket 11-438) to the Fourth Circuit Court to consider those challenges. The Court last Term had simply denied review of Liberty University’s appeal, but on Monday wiped out that order and agreed to send the case back to the appeals court in Richmond for further review….

Liberty University has been pursuing a challenge to both mandates, based on claims that they violate rights to religious freedom or to legal equality under the Constitution. The Fourth Circuit had not ruled on either of those claims, because it ruled that Liberty was barred by the Federal Anti-Injunction Act from suing to stop those mandates. That is one of the issues the Circuit Court will have to reconsider when the case is returned there. The Court cleared the way for doing so by vacating and remanding the Circuit Court’s earlier decision.

Sooner or later, they will run out of fingers to hold the dyke back from the coming flood of lawsuits that this law, which we needed to pass in order to understand what was in it, causes.

Amen. Thank you lord for help putting a stop for making private business pay for the sluts they employ for their ONE NIGHT STANDS and happy hour hookups. Say NO to forced payments of abortions.

Is this good news?

I’m sorry, but I don’t have much faith in any branch of the government doing anything to support either the Constitution or the rights of the American people against the government. I have been reading commentary at other sites to the effect that:

With Roberts on their side [and he has indicated that beyond question] the Left can do anything. Until they reach the point where they convince enough of the population that they no longer have any legitimacy and that they do not have to be obeyed any longer.

The Fourth Circuit will take up the issue, and will either restrict the practice of religion to the insides of churches and synagogues [but not mosques]; or it will progress to the Supreme Court where sometime around 2014 those restrictions will be nailed down permanently by the Supreme Court.

Of course, with the statements by Jamie Foxx on Black Entertainment Television Sunday at the Soul Train Awards describing Buraq Hussein as:

“Our Lord and Savior Barack Obama”

[video was there earlier this morning, but suddenly "does not exist". It is out there though, keep looking.]

one can see the Senate imitating its Roman namesake and declaring him to be divine. Which would take care of the First Amendment problem with a little adjustment. [/s]

So, they have standing to challenge their oppressors. Excellent. No one should be forced to fund the elective abortion of human beings and similar caustic policies.

In any case, it is a dissociation of risk which sponsors corruption. We should be critical of any policy which engenders a mapping of responsibility which does not correlate with original stakeholders.

A question for any Legal Eagle types out there. I only speak Engineering so I’m confused on this.

I understood the “is it a tax or are you being forced to engage in commerce” argument which Judge Roberts ruled it was a tax.

So this a new angle to potentially throw out the individual mandate requirement or narrow it? The “legal equality under the Constitution” argument I don’t understand in this context.

Obamacare seems to live a charmed life as does his Holiness, Barack the Second.

I will refrain from breath holding that anything of significance will come out of this for the majority of tax payers who are now on the hook for free health care for anyone including non-citizens who broke the law by sneaking in over the border who wants it without the burden of personal responsibility.

Sorry to be a buzz kill. Honest.

So, how will CJ Roberts screw this one up?