But triggers the gag reflex, almost as much as these bumper stickers.

From Peter, taken in Richmond, VA: 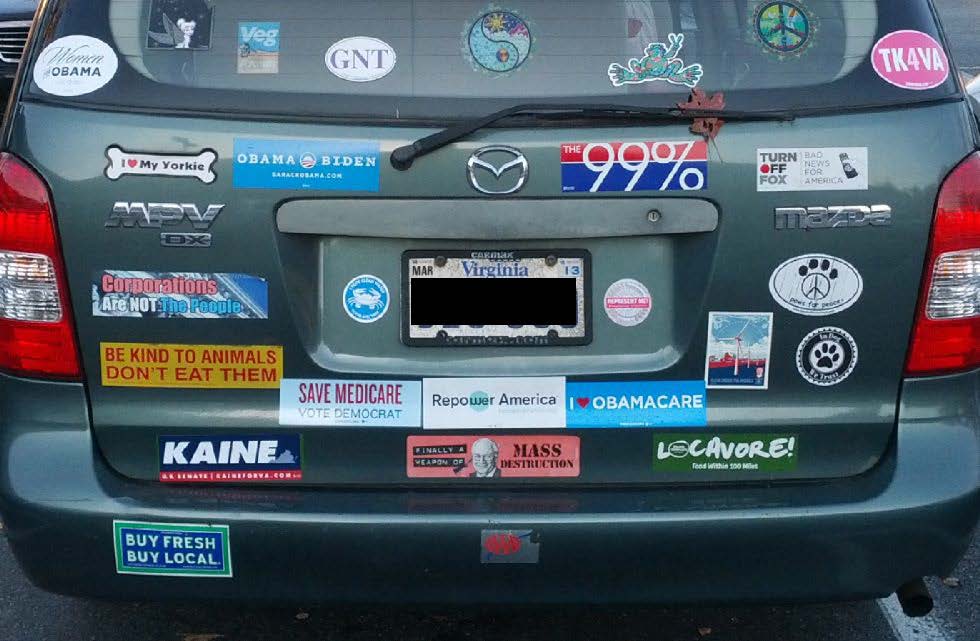 Just another example of what is wrong with this country.

“Locavore” – they eat their own.

I wonder if they understand that the Obama administration has been systematically destroying the organic and small farmer through over regulation.

I live near Blacksburg, Virginia, home of Virginia Tech. Blacksburg won’t allow WalMart to build in their city limits. Nearby Christiansburg has a WalMart, and they benefit from the taxes.

What I love to do while driving into the parking lot of WalMart is to look for the cars from Blacksburg that have the “Shop Local, Buy Local” stickers on them. The irony would be lost on them.

It would be nice to take them from their home and cleanse their minds from the filth they’ve been fed. If that fails, well, grant them their wish ASAP cuz in their future is an Israeli missile with their name on it.

Happy Thanksgiving everyone! My favorite holiday.

Now, get to work on that tryptophan induced stupor!

(And whatever buzz you have in mind!)

Based on that one bumper sticker I’m guessing the owner thinks Tofurky stands for:

Yet another car you wouldn’t mind seeing at the bottom of a culvert. It would be more apropos if it were a Yugo though.

Some red meat to go with your turkey…!!!

Here, here! And a great Thanksgiving to you too, good sir!

Funny… I don’t see those Hippie-Mobiles in Arizona.
hahaha

What a relief,’Yo! She/He/Whatever LOVES both its Yorkie AND Obamacare!!

Is that Dick Cheney I see on the ‘Mass Destruction’ sticker..?? Thank God there’s at one decent, stand-up MAN on that carrot guzzling car.(-:

Looking at that array of stickers, four little words come to mind: Your brain on drugs.

I spend Summers up at my beach cabin in Long Beach, Washington. Up there we can drive on the beach and I have a nicely setup Jeep Wrangler with locking differentials, wide tires and a 9,000 lb winch.

Many visitors who are not familiar with driving on the sand head out on the beach and get stuck. It is considered the Holy Grail of stuckness to find a Toyota Prius with an Obama bumper sticker buried up to the axle in the sand below the high tide mark.

You should carry a supply of small, cheap, plastic buckets to offer them. But first ask them if they need a bailout.

If you see a car like that, feel free to take anything you see inside it. Consider it a tax refund. Be smart and don’t get caught though.

May this driver be hit with a turducken clue bat.

“Be kind to animals” and windmills on the same car. Perhaps they don’t consider birds and bat to be animals.

“Save Medicare” and “I love Obamacare”. Perhaps they are unaware that Medicare funds will be raided to fund Obamacare.

“Mass destruction”. Perhaps they are unaware that overseas engagements (e.g. Egypt, Libya, Syria, Yemen, Uganda, etc.) have been expanded under Obama’s administration. In any case, Iraq could have been avoided if Bush Sr. had finished what he started, or Clinton what he inherited. Afghanistan, unfortunately, could not be avoided. Although, Clinton poking and prodding people probably didn’t prevent 9/11.

Well, at least they are not “pro-choice”. There is no one I like less than people who are unkind to babies. Who, incidentally, are the only people literally without a voice or a means to prevent the termination of their lives.