Ole Miss slow-walks release of evidence as to students shouting racial epithets, but clearly the crowd did not do so

Intro by WAJ — The post below by Leslie Eastman explores the alleged “race riot” at the University of Mississippi the night of Obama’s victory.  The Ole Miss Chancellor issued a statement confirming that “racial epithets” were “shouted,” without any specificity as to what they were or by how many students. The Chancellor’s Office told Leslie the details were in the police report, yet as of this writing the Chancellor’s Office  has not released the police report to Legal Insurrection despite repeated requests, including by me.  We were given the run-around by the Chancellor’s Office, first told we could have it, then told it would have to wait until Monday, then told the police would mail it to us Monday (which of course is a holiday and there is no mail pick up).  Frankly, I find this slow-walking of the evidence by the Ole Miss administration outrageous in a racially and politically charged atmosphere.

It is with a healthy amount of skepticism that readers should view reports about “race riots” at the University of Mississippi after Nov. 6th election results were known. Specifically, AP started its report by indicating a “crowd of 400” people “shouted racial slurs” (emphasis added):

JACKSON, Miss. (AP) — A protest at the University of Mississippi against the re-election of President Barack Obama grew into crowd of about 400 people with shouted racial slurs as rumors of a riot spread on social media. Two people were arrested on minor charges.

The university said in a statement Wednesday that the gathering at the student union began late Tuesday night with about 30 to 40 students, but grew within 20 minutes as word spread. Some students chanted political slogans while others used derogatory racial statements and profanity, the statement said.

The incident comes just after the 50th anniversary of violent rioting that greeted the forced integration of Ole Miss with the enrollment of its first black student, James Meredith.

The New York Times and The Washington Post have reported the incident as a racial disturbance.

A more detailed review of the actual information available fails to confirm any riot-like hostilities during the event or provide specifics regarding the alleged racial slurs.

While any racial slur should be condemned, it makes a difference to how the protest is viewed if it was an isolated shout by one or two students, or if the crowd as a whole was involved.  The news reports suggested it was a racist crowd.

Here’s the Ole Miss Protest Video which started the claims of a “race riot” (language warning):

While an F-bomb is clearly heard, the only race-based item comes from the clearly African-American narrator, who dismissively says, “It’s a majority white people– that’s all I have to say about that.”  There were black students in the crowd (for example, at 0:54) and there is nothing racial in the video.

A University of Mississippi press release stated that “racial epithets” were “shouted,” without any specificity.

Tom Eppes, the university’s Chief Communication officer, confirmed to me that the University relied on statements in the official Police Report.  I formally requested a copy of the report, which Eppes promised to provide.  I also requested a copy from the Ole Miss Police.  However, despite following up several times on these requests, we have not received the report yet.

While it is impossible to verify whether any students shouted racial epithets, it is clear that this was not a “race riot” and that the crowd did not partake in such racist slurs.

Based on information we have received from Ole Miss students, and subsequent coverage of the demonstration,the demonstration was a college party crowd that got a bit too wild and was broken up police.

Piecing together the history, a small gathering of students were venting about their disappointment in the election results just as the outcome was known. Twitter and texting lead other students to join the spontaneous demonstration.

“There was no riot, just large concentrations of people standing around in a small area. That’s why the police dispersed it,” said freshman Shea Throckmorton.

“I was there the whole time,” Carr told WMC-TV. “There was one sign lit on fire. For about 45 seconds. Mostly, it was hundreds of college kids who heard the word riot and ran to take pictures and see what it was about.” 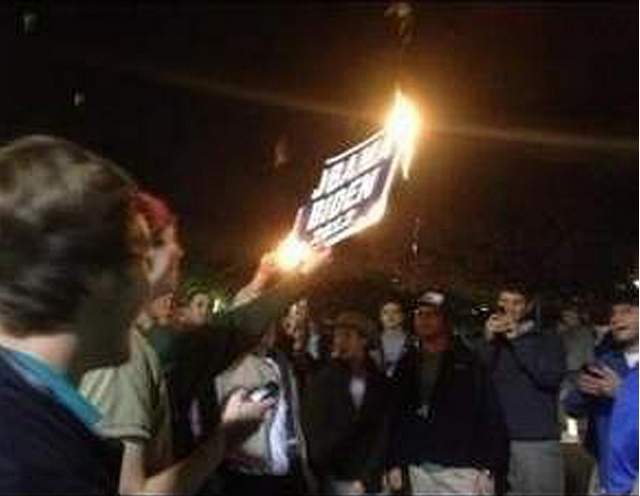 A look at the video footage and a photo essay from the school’s newspaper, the Daily Mississippian, shows a racially mixed group of young people who look more like they are partying hard than rioting. The student newspaper also reported:

Chancellor Dan Jones said the use of the term “riot” was inappropriate in light of the real scale of the event.

University Police Chief Calvin Sellars declined to provide details about the disturbance beyond the statements made by university officials.

According to the local Jackson-Clarion Ledger: “Officers made two arrests for disorderly conduct: one for public intoxication and one for failure to comply with police orders.”

Tracking down how the impromptu demonstration was reclassified as a “riot”, it seems a key source may have been Margaret Ann Morgan, whose Twitter bio describes her as a University of Mississippi journalism student.

Here is a compilation of her tweets from Twitchy: 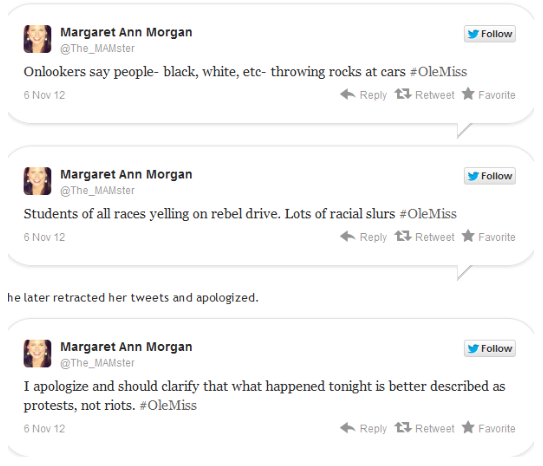 Interestingly, reports in the Atlantic Wire and The Root put little emphasis on the racial angle and discounted that it was a riot.

In essence, it looks like the early news reports quoted social media. And since the social media was rife with false allegations and dramatic fiction, it seems an entire group of disappointed students engaging in First Amendment freedoms were needlessly vilified as racist rioters.

Ole Miss contributed to this confusion by issuing a statement confirming that “racial epithets” were “shouted” but failing to identify how many students did that, what the epithets were, or releasing the police report which supposedly contained that information.

Certain news media are very disappointed, I’m sure, that no post-election race riots broke out to make exciting post-election coverage.

The atlantic wire and the root need to get with the program.

Those who seek evidence of race riots are referred to the aftermath of the Rodney King trial in Los Angeles.

The irony is that , if all goes well & he survives via the help of LSU medical care , she will be 60% very pink.

Perhaps she will turn out camoflage.

JackRussellTerrierist in reply to BannedbytheGuardian. | November 11, 2012 at 4:54 pm

She will be as ugly on the outside as she is on the inside.

Perhaps she is one of those many blacks who is conflicted and somewhat dissatisfied about having been born black, sometimes wishing she’d been born white. If so, that conflict is now forever emblazoned onto her.

Some thoughts (I know no one asked):

Mr. Adelson and Messrs. Koch: Unless you’re content living in what is about to become a @#$%hole of a nation, you need to invest in conservative media (entertainment, in particular) to overcome the massive power of the leftist/democrat government-media complex that has corrupted the free press in our nation and threatens our First Amendment rights to free speech. (So Senator Joseph McCarthy was right after all.) The conservative media talent is out there, and it’s ready to go. (Clint Eastwood comes to mind.) The irony here is that if you do it, you’ll wind up making even more of a fortune.

We also need to starve the GOP, an organization corrupt as any SEIU union local. Nothing should come that organization’s way until Boehner and Cantor get the boot from their Squeaker Speaker and Minority Wimp Whip positions. Concurrently, you — along with the rest of us — need to fund the passionate grass roots conservative movements all over the nation. All of them were organized and energized, ready to fight for Romney. To a one, they were all given a stick in the eye by the Romney campaign when they tried.

Mitt Romney: a great guy, but a great failure at running a presidential campaign, and a spineless political adversary to those not within his own party. Who’d have thought? (Many of us, actually. Many of us knew this would happen. We spoke, but no one listened.) We could have had Newt — he probably would have done a lot better, and maybe energized those 3 million GOP voters who stayed home rather than vote for Romney, a nice middle-aged man in over his head. But Romney and the GOP ‘establishment’ hogged it by systematically slandering the conservative GOP candidates during the primary — and then blew it for all of us.

Finally, if we here can make a truly conceivable argument that Boehner is being blackmailed (Exhibit A: he sat out the election; Exhibit B: Goebbels Axelrod), then even if we are wrong, how could any of you stand by and watch someone this negligent or derelict in his duties be re-elected Speaker of the House in the 2013 Congressional term? How about an answer?

For every person that Newt energized, he would have turned off one or two more. Just show him cozying up to SanFranNan on environmentalism, or saying that trying to save entitlements from imploding is “social engineering from the right,” or vilifying people who actually make the economy move.

Or talk about his multi-year affair with a staffer, for whom he eventually dumped his second wife, and then went around presenting himself as a moral teacher. Men may be forgiving (or even congratulatory) about that sort of thing — after all, Newt got himself a younger wife and now he’s happy — but it doesn’t play so well with self-respecting women.

Newt might have lost (Romney sure didn’t win), but he would have damaged Obama by having said about Obama what Romney though ‘unsayable.’ He would have counter-attacked the democrat media, instead of toadying to it.

While Newt might have lost, (again, Romney didn’t win), he would have kept the base intact and weakened the feckless, corrupt GOP leadership.

So here we are, having lost, with nothing negative said about Obama by Romney that lingers in the air, our base is completely dispirited, and the GOP establishment hacks are doing their usual thing.

Just as a long time browser of the Clarion Ledger: I wouldn’t trust that paper even as parrot cage liner.

Play with race-baiting, and you get burned.

The riots will come later if the Obama voters discover that they did not really elect Santa Claus after all.

Can’t believe anything of racial intolerance happened in Mississippi because they had a Democrat as Governor with about two exceptions from 1876 to about 1992. And we all know it’s the Republicans that are racist. Shame about Douglas losing out to that Illinois lawyer.

The fact that the alleged “racial epithets” aren’t defined as anti-black suggests to me they were anti-white in nature, if they actually happened.

When it’s black-on-white, the race of the offender(s) is not specified.

the same people that complain about the liberal media,(pravada),are talking their word for what happened in this election.
i’m not a sore loser,i will pay my taxes,obey the laws as always,but i will never accept pravadas unbelieveable explanation of the outcome,their still counting votes there maybe millions that won’t be counted,and how many machines changed votes,hundreds of incidents of blaten voter fraud.
their misleading unproveable statements,70% of hispanics voted for o’bama,ok how many hispanics legally voted for o’bama.
europeans favored o’bama,80%,but no we don’t count their vote their not americans,but pravada in this election elevated all hispanics,into americas diversity,i’m no lawyer but illegals,voting illegally is’nt diversity.
my favorite bush quote to a reporter,just because you say it does’nt make it true.
pravadas going to do what ever possible to try to get past the uglyness of this election,by blaming conservatives,and never mention the illegalities,and fraud.