No bumper sticker left behind

No bumper sticker left behind

Trying to clear the backlog of election-related reader photos.

Spotted at Menards in Fort Wayne, Indiana. Keep up the good work! 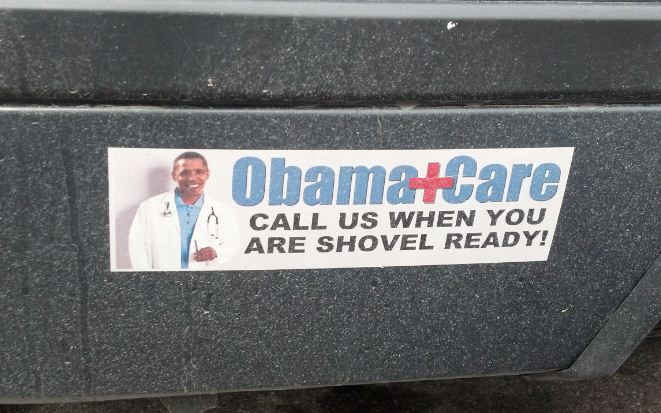 My daughter and her boyfriend were in downtown Fort Worth yesterday when they saw this truck. The sign says:

“If you voted for our current president in 2008 to prove you weren’t a racist, please vote for someone else in 2012 to prove you’re not an idiot. 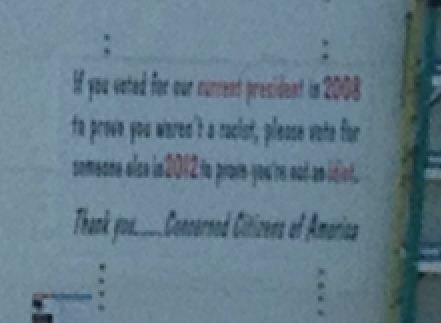 I took these pictures in a grocery store parking lot in Alachua, FL —
which is just north of Gainesville, FL. 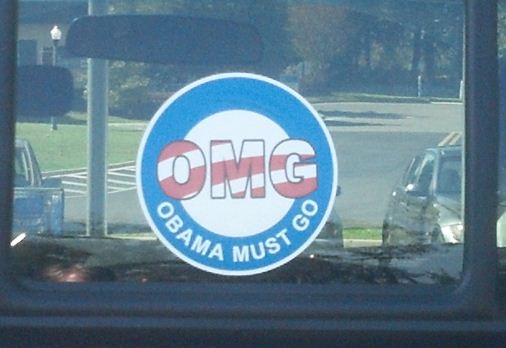 I have read Legal Insurrection since it’s early days . . . I would like to thank you for everything you do . . . I saw this sticker today at a Lowe’s parking lot in South Carolina and could not resist to take a picture and send it to your already vast collection. 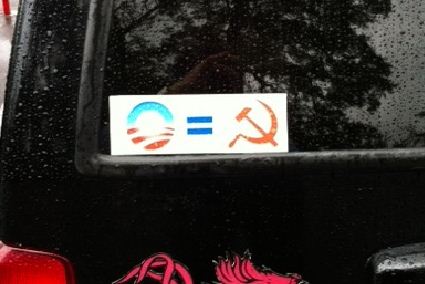 From Matt in Colorado: 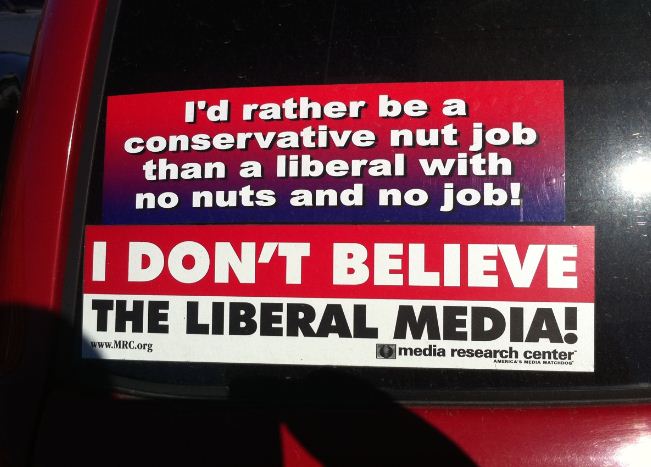 People may scoff or chuckle at the first bumper sticker (I did). Yet, it reminded me of a heading I saw on Drudge. From the original article:

Opening paragraph: The majority of NHS hospitals in England are being given financial rewards for placing terminally-ill patients on a controversial “pathway” to death, it can be disclosed.

Another one: But opponents described it as “absolutely shocking” that hospitals could be paid to employ potentially “lethal” treatments.

With Obamacare, we’re on the way to similar practices.

ABOUT THOSE “DEATH PANELS”–they are forming NOW:

QUOTE: “A top Democrat strategist and donor who served as President Obama’s lead auto-industry adviser recently conceded that the rationing of heath services under Obamacare is “inevitable.” Steven Rattner advocated that such rationing should target elderly patients, while stating, “We need death panels.”

ROMNEY & RYAN WILL BEGIN THE TOTAL DISMANTLING OF OVOMITCARE ON DAY 1: VOTE THEM IN IN TWO (2) DAYS!

I think of medicine as a practice of science and art. Science provides information and art directs the skill of its use. I think we all have the wish that this is accomplished with the greatest of facility and compassion as possible throughout life. This is especially true of those whose health condition calls forth the very best of these to be present. To interject, if not replace, this with politicized, governmental regulations is to demean life itself.

“OVOMITCARE” – That term is a new one to me. Graphic!

Professor, this is off topic, but I read this headline and thought I was seeing things. Am I crazy or is this insane?

New Jersey to allow voting by e-mail and fax

Voter fraud anyone? How will they control this?

CHECK YOUR VOTE! For those of you that haven’t voted already, reports are coming in daily now that when you push the vote/submit button on the electronic voting machine and the list of whom you voted for comes up the VOTE is CHANGED to obummer. CHECK YOUR VOTE!

Just TWO days to election, and the Media Whores,
Have thrown all sense of honor away.
Doesn’t matter to them if they slander or lie,
Just as long as their “bitch*” can still stay,
In a post he’s not fit for, with a title he’s not earned,
With a job he has never fulfilled,
But the Media’s whores learned in 2008
They’d divine power to raise up a shill**.

So they took an unknown from the City of Crime,–
Some kid with a past they could hide.
And their finest deceivers conspired to create,
A fiction who could smile and lie.
Down the “memory hole” went his past, piece by piece–
How’d it work? We can hardly begin,
To appreciate the skill and sheer gall of their fraud,
They did “whatever” they needed to win.

To the men he was “buff”, to the women “pure sex”,
(Even now there are some who will swoon!)
To the blacks he was “brother”; and the whites felt for sure,
He’d absolve them of their “racist” doom.
He’d a hell of a smile; and he learned from the best,
To project “hip” and “cool” on TV.
He was carefully trained in the “Teleprompter’s art,”
But without? Let’s just say–“lost at sea”.

Well, the Media Whores did a hell of job–
He won BIG in ’08, and began,
To pretend to fulfill all those outrageous vows,
Which he’d been making up as he “ran”.
The TV, the papers, the progressive blogs,
Praised his FAILURES as if he was God,
But the fact was, he really had nary a clue,
How to do more than watch them applaud.

Well, the “rest is now history” (such fearful words),
Our Republic’s survival’s in doubt.
But one thing that’s for sure is we better make sure,
That we know what this election’s about.
“Cause the Media Gods on the 5 o’clock news,
Do NOT want you to think; if you do,
You may form YOUR opinions, and questions, and ask—
How honest has the Media been with you?

* Slang for a weak man dominated by others.
** One who acts as a decoy, stalking horse, or “surrogate”

IGNORE THE PRESSTITUTES; THE MEDIA WHORES, THE POLLSTERS—they’re all frauds.

GREAT photos – the “Obama=Communism” is so self-evident.

Channeling Denny Greene, “He’s exactly who we thought he was!”

Won’tcha all be glad when the eviction notice is delivered to the White House before midnight on Tuesday?

I’m not that sure it will. Even if it is delivered, I have a uneasy belief that for millions of people they think that with an obama-defeat their work is done, at least for the next several years. Should this be the case, then we really will have not learned our lessons.

We really will have not learned them at all! It will mean that we have not taken a long, hard look to the past, done the same for the future, and finally realized we, as a society, can no longer just live in the immediacy of the moment. No matter how we view it, there’s still pain ahead. The question seems to be what kind, for how long, and how severe? We need not kid ourselves that with a Romney/Ryan victory “Happy days are here again!”

I wish I could have snapped a picture of the vehicle I saw in Brevard, NC yesterday. It was a Prius (of course), just plastered with Obama stickers. Right in the middle – in the place of (dis)honor, was a large banner reading, “Proud grandmother of a Naval Academy Graduate”. The senile old woman probably gets all her news from CNN and therefore has never heard about her hero Obama abandoning two Navy Seals to die in Benghazi. To add more cognitive dissonance to the mix, at the bottom was a sticker reading “Support the troops, bring them home”. So she’s proud of her son the warmonger? Sheesh…