Debate must be refocused on health care, not health insurance.

President Obama may have secured reelection from the American people, but that doesn’t mean that they support his view that the federal government should have its hand in ensuring that all of its citizens have health insurance.

Whether this is simply an intuitive belief Americans hold or a reaction to reality as more and more provisions of Obamacare are implemented, it is not without sound reasoning.

In October, an article appeared in Forbes written by Avik Roy entitled, “Why Health Insurance is Not the Same Thing as Health Care.” It is a very informative read and I recommend reading it in its entirety.

The point which I would like to highlight here, however, is this. Government sponsored health care, such as Medicaid, has little impact on preventative care or rates of survival for the previously uninsured. [Emphasis added]

Just because you have a piece of paper that says you have “health insurance” doesn’t mean that you can see a doctor when you need to.

There are three major forms of health insurance in America: Medicare, our government-sponsored program for the elderly; Medicaid, our government-sponsored program for the poor; and private insurance for most everyone else. As I have described extensively on this blog, it’s much harder to get a doctor’s appointment if you’re on Medicaid than if you have private insurance, because Medicaid pays doctors so little that doctors can’t afford to see Medicaid patients. This, in turn, leads patients on Medicaid that are at best no different than being uninsured, and in many cases even worse.

Its not just access to preventative care that sees little improvement under government insurance. Survival rates are also only nominally improved.

To illustrate this, Roy shares this chart, obtained from Obama advisor Ezekiel Emanuel which deals with cancer survival rates in America for those having varying levels and types of health insurance. 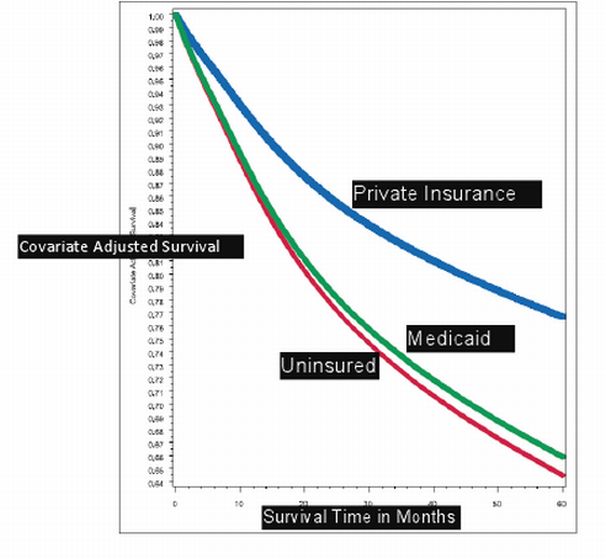 In many respects, having government sponsored insurance such as Medicaid is of little or no improvement to those who were previously uninsured.

Roy argues that Obamacare, for all its intentions otherwise, only exacerbates this issue.

This, then, is the fundamental problem with Obamacare. It expands coverage, in large part, by pouring trillions of dollars into the Medicaid program, without making any meaningful improvements to the way that program is structured. And Scott Gottlieb and Tom Miller, of the American Enterprise Institute, fear that Obamacare’s private insurance exchanges will also suffer from poor quality and poor access, just like Medicaid.

The proper goal, then, is not merely to expand coverage out of some obsession with an arbitrary statistic, but rather to do what we can to make it easier for Americans to buy high-quality, private insurance.

The afformentioned Gallup poll suggests that Americans, broadly speaking, understand and agree with this conclusion.

The question is, can we refocus the American health care debate on health care, rather than health insurance, before it is too late?

ObamaCare has virtually NOTHING to do with health…or even insurance.

It has EVERYTHING to do with control.

Just like “responsible gun control”. If the press had to buy a license before it had a “right” to publish an article [a right guaranteed by the First Amendment], they would not be supportive of this administration.

Presumably, once the ultimate objective of single payer has been achieved, everyone will essentially have Medicaid, and people who can afford it will have to pay out of pocket to get what their health insurance currently covers. The rest of us can take comfort in the knowledge that we are at least equal. Equal to the poor.

You’re assuming it will be legal to accept direct payment from patients.

The question is, can we refocus the American health care debate on health care, rather than health insurance, before it is too late?

The faux debaters (GOP) opted out of the initial debate, now, no debaters are allowed at the debate table.

If Americans understood, then why’d they vote for him?

Guess the allure of “free” is so strong that people would rather have “free” crap (although we adults know that whatever the government hands out is not at all “free”) than quality goods or services at a cost.

Just like the people who balk at paying out-of-pocket to take private ESL tutoring from me will nonetheless b&m about how all the “free” ESL classes subsidized by us taxpayers aren’t very good or convenient, and they don’t learn as well as they do with us…

I’ve been saying for some time that it should have been called Obama-surance instead of ObamaCare. To get care, you need to have access to doctors who have access to diagnostic equipment, medical devices, and relevant pharmaceuticals. It’s all of these necessary things that ObamaCare will make harder to find.

Currently, I’m wrestling with what type of supplement/alternative to consider for next year’s Medicare.

You cannot get a straight answer from ANYONE!

And… I discovered today that somehow I was enrolled in both; traditional Medicare AND Medicare Advantage which by the way is illegal.

My friends, we are so screwed..

I can’t believe this thread, or these comments.

like being surprised by, and debating the worthiness of plugging the holes after the ship has sunk.

It doesn’t matter what Americans want now and it doesn’t matter what the understood or failed to understand on election day. Now we all get full-bore Obama. My prediction is that, come 2016, we will be a shockingly poorer country. But that’s good for Obama, because poor people are secure Democratic voters. And that we will have many more secure Democratic voters is his plan.

It doesn’t matter how bad things get. Obama and his party organ (the MSM) will blame it all on greedy rich people and corporations. Enough voters will buy it to assure continued Lefty rule.

“The question is, can we refocus the American health care debate on health care, rather than health insurance, before it is too late?”

The answer is no. “Refocus the…dabate?” With whom, the people who wouldn’t vote Obama out of office?

The health care carriers are working overtime to become full-fledged partners with the government. I carry Medicare supplemental coverage with New York’s Excellus BC/BS. I’ve received both letters and a phone call(!) from my very own personal advocate who has been appointed to support me, help me with any questions or problems I might have – medical, pharmaceutical, administrative. I’ve been assured she’s there for me if I need her. I’ve received a personal healthcare calendar, a full year, twelve month wall calendar! This useless junk in addition to a pile of books that includes a provider list (112 pages-down from 550!), Medicare members guide (85 pages-full color, glossy!), Medicare handbook (140 pages, color, no gloss), fifty pages of something that’s not even identified, and an evidence of coverage (take it with you in the ambulance) and other legal information book (145 pages). The cost of all these plus the immense legal, medical, and administrative bureaucracy required to support them will be rolled up and included in the necessary cost of providing medical coverage. As with any fixed price program designed to establish a cost ceiling, the ceiling will be the LOWEST price you’ll ever pay because all cost will be justified and passed through. Any cost reductions will be those enabled by the carriers whenever they have the ability to withhold payment to someone else, the providers. The quality and quantity of care must go down—while it is still available. The insurers must partner with the government to have any role in the future of healthcare, and they will.

Obamacare is an abomination of a law. It will never be unwound. The only debate will be over every little changes in it; a thousand negotiated, haggled trade offs; “we’ll let you change that only if you let us change this.” It is a governmental, full employment monstrosity that’s just starting.

It’s been spelled out thousands of time for the last 4 years.

Anybody that doesn’t get it by now, never will–including the GOP.

One last thing–ObamaCare is completely unworkable, By design.

Have a nice day.

I would not be so generous as to give those who voted for Obama the benefit of the doubt that they simply looked at him from the wrong angle when it comes to ObamaCare. Nuances are fine for the rational. I am more of the opinion you should always “be careful of what you ask for, because you just might get it.”

The GOP would be better off acting as the opposition party than being a party to this self induced fiasco. All attempts by the rational to save an irrational person from the consequences of their own choices only enables the irrational to continue making bad decisions. The electorate needs to fully experience the policies of liberalism and any attempt by the GOP to mitigate the consequences by blocking legislation or even participating in crafting a compromise merely delays the inevitable. Any delay will automatically be blamed upon the GOP.

From personal experience I have learned you can not save a person who is unwilling to make the effort to save themselves. All that is accomplished is you putting out herculean efforts while the other makes no effort at all. And even IF you pulled off their saving grace for just one of their bad decisions, they will promptly make more bad decisions because they KNOW YOU WILL BAIL THEM OUT. If the last four years have taught us anything with the Bank & GM bailouts it is these people have no vested interest in self preservation outside of your time and money. STOP BAILING OUT VOTERS AND LET THEM FAIL BECAUSE ONLY WHEN A PERSON FAILS CAN HE LEARN RESPONSIBILITY.

Yes, lots of people are going to get hurt if we don’t bail them out, but human nature does not change, it is only through the experience of pain that people learn a lasting lesson. When you tell a child not to stick their finger in the fire because it will burn them, they will still do it to verify what you say and at that point for the rest of their lives they won’t ever put their finger in the fire again. While on the surface this seems callous, in the long run you forge an adult who is a contributor to society and not a perpetual ward.

I submit that there will be a certain number of people will refuse to learn from this experience insisting we double down and society will be better off letting these people experience the consequences of their mistakes, i.e. deletion from the gene pool via ObamaCare. The hospitals in Britain are doing a systematic job of deleting perpetual wards of the state. If the electorate insists on condoning ObamaCare by voting for those who installed it they will get the exact same treatment. We should not interfere for the good of society. Yes, that’s cold but since they are forcing me to subsidize their misery it is only fair.

Here is where ObamaCare is headed:

How’s that for the cost effective practice of medicine for the masses?