I was hoping for but not quite expecting this race to tighten in one of our Upstate NY Operation Counterweight races.

Republican Matt Doheny was behind double digits in an early September poll, the last public poll in the District.  Now it is a virtual tie.

This could be a chance to get back a Republican seat which never should have been lost back in the 2009 special election and again in 2010.

A new Sienna College poll (a pollster specializing in upstate NY) had the race at 44-43:

After having an early double digit lead seven weeks ago, Democratic Representative Bill Owens is now locked in a near dead heat with his Republican challenger Matt Doheny. Owens has the support of 44 percent of likely voters and Doheny has the support of 43 percent, according to a Siena College Research Institute poll of likely 21st C.D. voters released today. 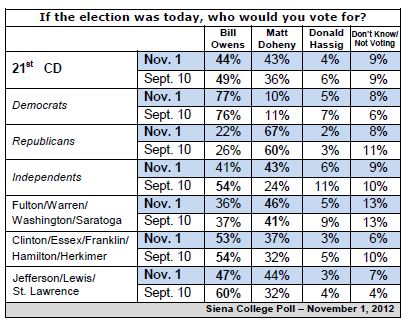 You can make a last minute donation to Matt Doheny.

OK. I’ll do it and send him some additional California dollars. We need every seat we can get.
Thanks, Prof, for running this operation.

The polipundit.com site noted an interesting tweet from pundit Moe Lane.
If Obama is doing well, wouldn’t you expect the Dems to be on track to pick up a slew of House seats? After all, there was a big Repub bulge from the ’10 midterms. Some of those guys must be marginal. Some of the seats must be hard to defend. Yet, we see stories like the one above. Also, this site has reported that Rhode Island Dem Cicilline is having trouble. Also, here is a big-picture story that polipundit links from the Cook Political website: “We are narrowing our House outlook from a Dem net gain of 0-10 seats to a Dem net gain of 0-5”
Zero to five? That sounds pitiful!