Posted by William A. Jacobson Friday, November 2, 2012 at 11:45am 8 Comments
More Sharing Options

As part of the continuing effort to get as many reader photos as possible published before the election, here are some on a theme.

I’m a longtime reader and two time contributor. I’m sending a pic of something I spotted this morning. I actually discovered it a few days ago, but it was missing a couple letters back then (due to weather, or vandalism, or who knows what?)

Anyway, the attached photo is of a display in Central MA. The homeowner also has a yard sign that reads “Defend Freedom. Defeat Obama”.

So shines a good deed in a weary world. Ok, so that’s a quote from Willy Wonka, but it’s applicable in this case.
Kind of makes politics seem like a full contact sport. 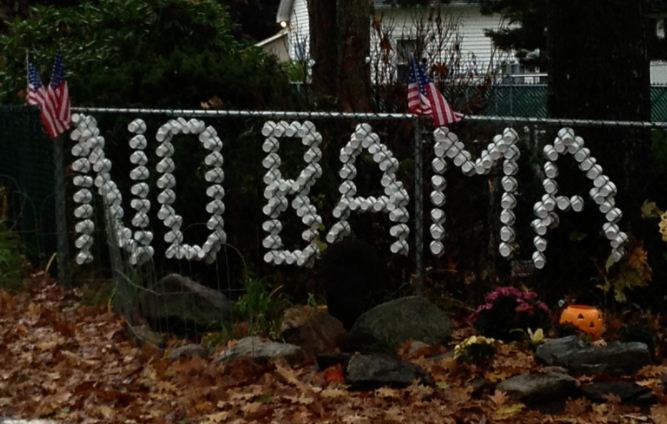 My neighbor was wearing this one last night.

Taken in the parking lot of a Giant (unionized) grocery store in deep blue Montgomery County, MD, in the greater DC area. 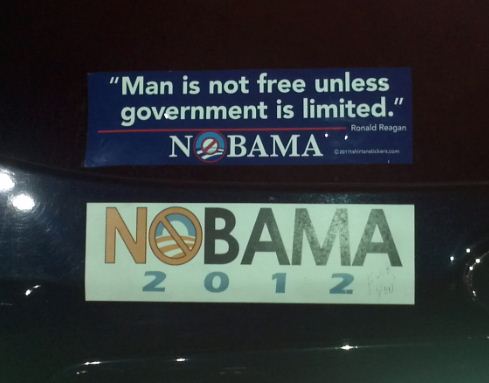 I just got back from voting and thought I had voted for Romney, but the sticker they stuck on my chest as I was leaving says I voted for some guy named Early.

Henry, thank you SO much for the laugh. You have no idea how badly I needed that.

Actually, you could do a lot worse than vote for an Early…

The “Nobama, keep the change” t-shirt reminds me of one which said, “I used to be part of the 1%, ’til Obama came along and drove my job over the fiscal cliff.”

I saw a car here in my state that actually had NOBAMA as its license plate. Someone spent the fifty bucks to get a vanity plate that said NOBAMA. Unfortunately I was alone in the car and couldn’t get a picture in traffic.