Outside of Google Docs, the word collaborator refers to someone who cooperates with an enemy in a time of war.

Gazans in general and Hamas in particular consider themselves to be at war with Israel.  Via the New York Times:

Masked gunmen in Gaza summarily executed a man here on Friday as a suspected collaborator with Israel on the third day of its deadly aerial bombardments, shooting him multiple times and leaving his body beneath a billboard featuring a Hamas fighter holding a rocket.

You’ll appreciate the exquisite care with which the “suspected” collaborator’s executioners carried out the deed, as described by an eyewitness:

“They took him out from the Jeep with his hands cuffed behind his back, they pushed him under the poster and fired three gunshots at his head from the back,” Mr. Mohammed said. “He was still alive. Then they set his cuffs free and turned him upside down and fired on him again.”

In the gentle, soothing words of the Times reporters, the shooting “evoked mixed feelings” among the populace, which apparently has a different conception of mixed feelings than we do, given our national hair pulling over the treatment of terrorists’ Korans in Gitmo:

“There were kids and children on the street,” said the witness, Mr. Mohammed. “They should have executed him in a far place.” 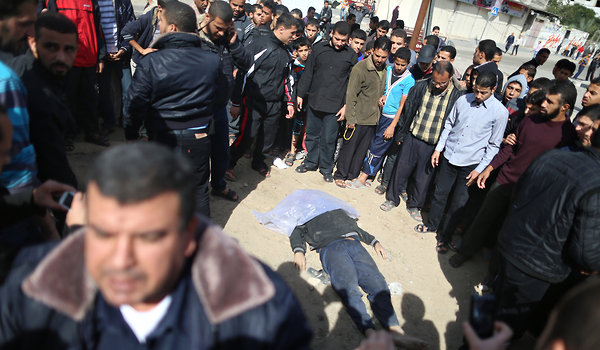 You’re forgiven for thinking that the word “savages” just isn’t an adequate descriptor for Israel’s enemies. Israel (little satan) may be the Muslims No. 1 target, but because we (great satan) do not submit to allah and his so-called messenger we too are targets and will suffer continued Islamic attacks.

I think that the descriptor you are looking for regarding these individuals:

Oh, but we have submitted. obastard was re-elected for starters. Secondly, we kow-tow to Muslims throughout this country – in education, the workplace, and in medical and commercial venues……and even in some courtrooms.

Hell, we often don’t even have bullets in our soldiers’ arms for those deployed to the middle east.

We are a joke, a sad, sorry-assed joke. Pathetic. It breaks my heart to think of our soldiers who, as it turns out, died in vain over there.

Israel should nuke all those bastards NOW before one more missile is launched at them.

No, Invade Gaza, load’em all up in a cargo plane, strap parachutes on them and drop them into Libya, Syria and/or Iran.

Then dare any other Islamic hell-hole to try ANYTHING but warn them the consequences will be very, very dire.

Bet that fella they executed would’ve liked the option of living in a GITMO and a trial by a US military tribunal.

But, hey…WE are the bad guys…

I don’t believe not one damn photo coming from Gaza, and haven’t since 2006, since I saw how they did it.

Appeasement of the archaic savages of Islam has always failed throughout history and forever will. They’re incapable of comprehending anything more than slaking their blood-lust and worshiping their false Prophet idol. They are Demons incarnate﻿ walking the earth spreading nothing but Destruction & Death — enveloping the entire globe.

I stand with the Righteous.

I stand with Truth.

I stand with Israel!

Nothing to see here, move along.

Not like it was a Vietnamese general lawfully executing a non-uniformed saboteur in time of war. Said saboteur having been apprehended in the act of murdering unarmed civilians.

Now that was a travesty.

You think Swiftboat would approve?

I had a political philosophy course once and the professor told the class that the next time they saw an Israeli/Palestinian conflict on TV, to just turn off the sound and watch the agony on the faces.

He said it would be hard to determine which side was which … meaning, really, that both sides were equally guilty of the violence.

His little trick doesn’t work. Even with the sound off, you can still see which side is targeting precise targets and which side is shooting off rockets trying to kill anybody, and as many people, as they can.

Was he really seeking to measure the justice of a cause by the agony its participants feel? If someone feels pain then they’re in the right, or at least those who caused the pain are in the wrong? Or what? I’m not sure what this test was supposed to prove. But did this professor imagine that the same agony was not to be found on German and Japanese faces in WW2, or on the faces of common criminals in a shootout with the police?

Wonder how many of Obama’s Black Congressional Caucus homies signed on to the House Resolution supporting Israel today…Or, is that a rhetorical question,’Yo?

The old: Israel is surrounding by it’s neighboring enemies.

Israel fights for its very existence … The USA has not fought a righteous war since WWII. Honor on those who died for the misguided (deadly) decisions of three generations of politicians. I wish them an eternity in Hell…

Excuse me? Which war has the USA fought in the last 60 years that wasn’t righteous? Is not saving people from slavery and destruction a noble cause?