Houston, we have a problem

Houston, we have a problem

I found this right outside a Wal-Mart near Houston, TX, this morning.

Frankly, after waiting to see unfold the farcical effects of a horrifyingly bad law that was passed without the express consent of the people, affirmed by a clueless SCOTUS, and here to stay because of a complicit and clueless electorate, I guess the sentiment on this sticker is just about right. 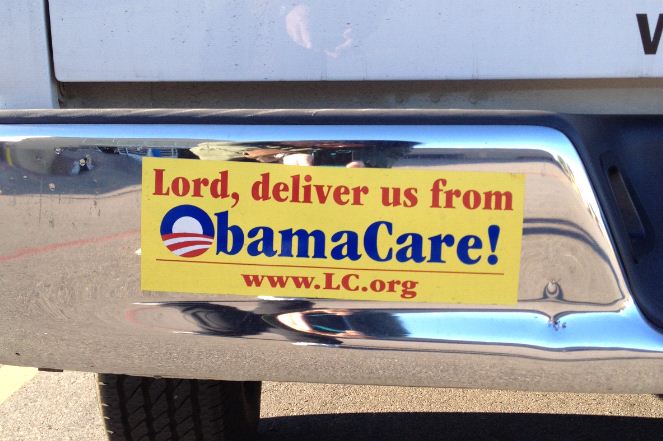 Ooooo, I’m going to tell Jamie Fauxx on you.

Lead us from temptation, and deliver us from Obamacare. Amen.

I’ve got my Gadsden flag and some holy tea. I’m ready for a political exorcism.

Consider adding a sign that reads Merry Christmas. Every year around this time I get ready to return all the wishes for a happy holiday season with a “and a Merry Christmas to you, too.”

While the economic catastrophe and the catastrophe for liberty that is Obamacare was created entirely and wholly by Democrats, we will not need the Lord to save us. Rather than make the Democrats own it, Republicans will soon be reaching across the aisle in a bi-partisan way to join with Democrats to “save” us from some of the worst aspects of the catastrophe. That’s the swell guys they are.

Too bad the Lord ain’t listenin’, and hasn’t for a very long time. Tea Party groups and other Conservative activists notwithstanding, so much for “for the sake of seven just men.”

Quite frankly, I’m seriously considering going over to the Leftist “Dark Side” because I want to be a winner once in awhile.

Seems like nothing we conservatives do is ever enough, and evil always triumphs. Not just wins, but overcomes triumphantly, often due to treachery and betrayal by “our” side, giving away victory.

We’re now worse-off than in 2009: back then, we at least had Republicans putting on a show of pushing back against Obama. Today, with spineless, treacherous Bully Boehner and Gutless Mitch in the Senate, it’s go-along-to-get-along time. With Amnesty coming (Limbaugh has thrown in the towel and Hannity has decided to collaborate), conservatism is doomed for two generations, if not forever.

Anyone want to join me on the Dark Side? My soul is already unquiet because of the horrors that await us. Just as well that the disquiet should be from being a lousy person.

I’m not kidding. I’m that tired of being betrayal and losing. I’ve stopped believing that righteousness (political or personal) is its own reward. It ain’t.

A man has only so many teeth in his jaw, and conservatives’ have been brutally kicked out over the last decade. Enough’s enough. Maybe I can even get me some of that public money.

The problem with Obamacare is three-fold. First, it does not address the underlying causes of inflation throughout the medical and pharmaceutical sectors. Second, it promises universal instant gratification which cannot be realized in reality without consequences. Third it conflates contributory and non-contributory (or net-negative) entitlements thereby sponsoring corruption.

I want my free Obamacondoms.