I cannot at this point verify that this was in fact a Senior Prank, or if it was just a rogue gang of Republican students wanting to make a statement or have a laugh.

Whatever the case, my former high school in Cobb County, Georgia has made the papers on this historic election day.

No, its not for fraud at the polls. Nor is it for voter intimidation. It was for this: 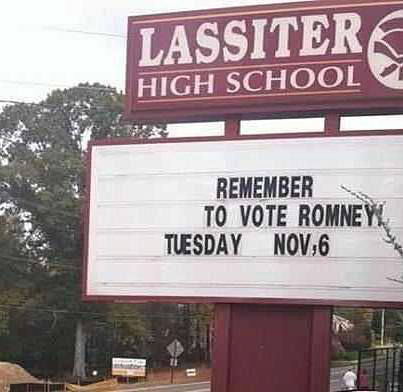 People driving past Lassiter High School in Marietta this weekend were stunned to see that the Cobb County school, which is a polling site, was evidently endorsing Mitt Romney for president.

On the billboard under the school marque the sign read: “Remember to vote Romney Tuesday, Nov. 6.”

Cobb schools and election officials confirmed Tuesday the photo was not fiction – and the sign is no longer up. Somebody put the sign up Saturday night, and school principal Chris Richie took it down Sunday, said Cobb County School District director of communications Jay Dillon.

But that wasn’t the end of it. The prankster – or pranksters – returned Sunday and put the sign up again. Officials took it down again and removed the letters, said Dillon, adding that school officials didn’t call police “because it wasn’t a crime, it was a prank.”

As the rumor and picture continued to ricochet around the net Tuesday, Cobb elections officials – alerted by a reporter from the Atlanta Journal-Constitution – said they would keep a watch on things.

“If it goes back up we’ll contact the school custodian and it will come back down,” said Cobb Board of Elections & Registration administrative supervisor Pam Burel.

Whoever the crafty bunch of kids are, thanks for adding a bit of humor to an otherwise stressful and nerve-racking day. It’s far and away the best prank I’ve seen executed at that school.

After the first time they should have used Liquid Nails.