Everything you need to know about Rhode Island in one photo

David Cicilline, the former Mayor of Providence who was “untruthful” about Providence’s finances during his successful 2010 congressional campaign, is in trouble.

The electoral momentum has shifted clearly to Republican Brendan Doherty, who has attacked Cicilline’s character relentlessly and successfully.

Yesterday the tainted and endangered Cicilline had a unity photo op with several big name Rhode Island Democrats … and also with the people who really run the state.

Here’s the image from WRPI.com: 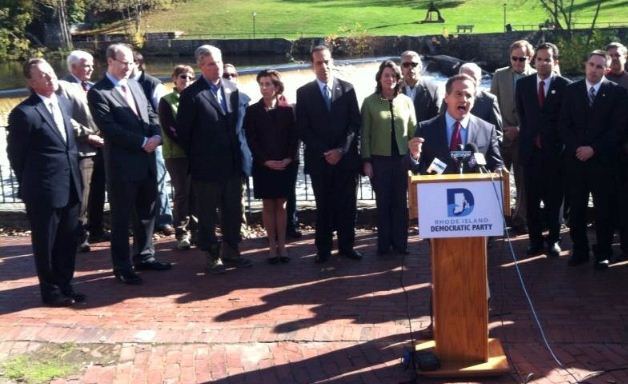 Here is the list of names below the photo, highlighting by me:

This tells you everything you need to know about who really runs Rhode Island and its Democratic politicians, and why Rhode Island is in such deep financial trouble.

You can donate to Cicilline’s challenger, Brendan Doherty, here.

How many union members does it take to change a light bulb?