Branco Cartoon – The Eyes Have It

Branco Cartoon – The Eyes Have It 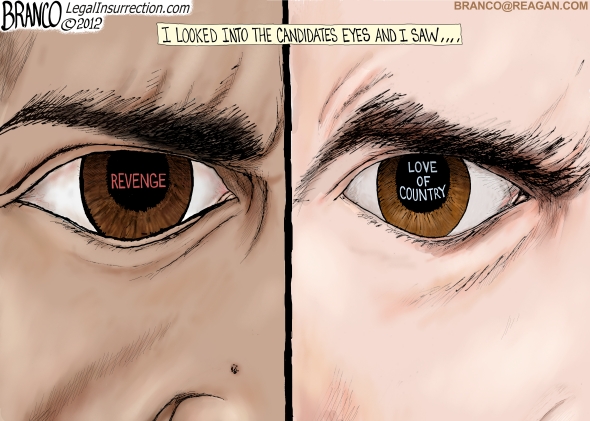 And notice there is no reflection of a teleprompter in Obama’s eye.

This reminds me of the saying, “The eyes are the windows to the soul.” Some of them we just as soon not look into.

Phenomenal. A picture (drawing) indeed is worth a thousand words.

Did you hear the breaking news about CBS and Candy the Cow both lying and the cover-up for bad-seed-barry’s own lie about his knowledge of the Benghazi attack?
http://www.breitbart.com/Big-Journalism/2012/11/05/Proof-Obama-Refused-to-Call-Benghazi-Terror-CBS-Covered-Up

Hypocrites On the Move..And Obama’s the Racist?!?!

“Well it’s too early to tell exactly how this came about, what group was
involved, but obviously it was an attack on Americans. And we are going
to be working with the Libyan government to make sure that we bring
these folks to justice, one way or the other.”?

After referring to “acts of terror” in other places?

Are you all utterly UNHINGED?

He didn’t deny it was an act of terror, (or affirm it, in THAT statement, although he talked about “acts of terror” in the Rose Garden that day, as Romney found out in the second debate) he was saying that they were gathering info and going to get the people involved.

Honestly, people. Are you that utterly prejudiced—I don’t know a better word–against anything this guy says?? I’m not saying prejudiced for racial reasons, but for pity’s sake. if the guy said the sky was blue, you’d say it was green.

Your ignorance of the widely available timeline wherein Obama alternately says “it was the video!” and “it was terrorism!” later to lie about when he said which is the reason folks ignore your post.

Up your troll game or get lost.

Am I unhinged? Well, yes and for good reason. Let’s consider Mr. obama:

He sowed the seeds of discord when, instead of looking to unify, he capitalized on every opportunity to divide in order that he might exercise power

He sowed the seeds of ineffective command when he had to be talked into taking out Bin Laden, but then wanted to take claim for justice that had bee planned adn then carried out by others

He sowed the seeds of further governmental intrusion in the lives of the American people through Obamacare, executive order, and agencies regulations

But most of all, most of all, he sowed the seeds of ill-will by not really liking people all that much (His tell about this was most recently demonstrated when he referred to himself as a “prop” in his own campaign. People are as if objects, props, to him. And, people usually know when they are being treated as such.)

So, tomorrow I’m hoping and praying that he will reap the harvest of what he has sown: defeat!

No doubt others could add to this list. So, back to your question about being “unhinged”. Well, I can only speak for myself when I say, “Yes, I’m unhinged. I’m crazy in that Patsy Cline sort of way. Crazy for loving this country the way I do.” obama spoke of transforming this country. As far as I am concerned, under him America the Beautiful will be turned into America the Disfigured!

Obama just reverted to his Chicago “values” that Rahm emanuel is so proud of.

Today Rush replayed comments he made in Feb 2009 when Obama was a month into office, declaring much of Obama’s political motivation to be *revenge* against our country’s long history of working against Obama’s primary constituencies, that is, poor and minorities, underscoring the widespread sense that Obama hates our country as it is and serves not the people, but his twisted sense of ‘fairness’ and revenge for unfairness.

Rush and others warned us. They were, if you will, shouted down by the MSM and all the others with whom they colluded to help bring this disaster into the presidency.

My hope for the results of the election? Rush and those others will be vindicated. He’ll have a favorite beverage and one of his stokers. Meanwhile, MSM will be eating some “humble” pie!