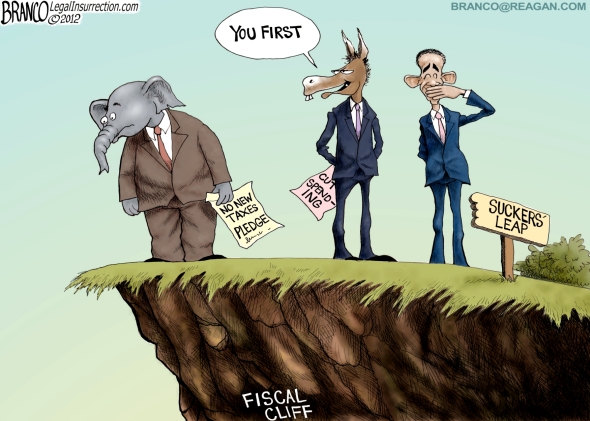 “We are Republicans, not Lemmings” should be the rally cry.

Well, it is leap year…

Just give me back my money before you three guys go over the cliffs of insanity.

Leno was grilling Gingrich last night, on the problems Republicans have with all the old white men in power positions. He pointed out how great Obama was at working together like he did with Christie. I wanted to scream “Hey Jay … that was a photo op … people probably had relief efforts held up just so Obama could get the picture.”

But that is the problem … Obama gets the photo op .. the media confirms how helpful Obama the Savior is, and comedians mock Republicans as out of touch.

All we need to know is Obama is a professional agitator that has NEVER been an executive decision maker. Image is everything, and mockery and setting up a fall guy. Do one thing (turn the Middle East over to radical Islam) while claiming he is doing another (e.g. “freedom” in Egypt, “respecting” their religion by attacking a straw man video).

The problem, the elephant always walks up to the edge, never attacks the left the way they attack “us”. They control the message, as shown by Leno confirming how well Obama handled Sandy, based solely on a photo op.

I had to turn the TV off when Gingrich as usual turned to his agenda, namely illegal immigration. Defying every poll that show Americans by a large margin want enforcement rather than amnesty of any form.

Leaders: ONE message every day from now until it does not matter any more…

“We are looking to the President for leadership. Where is your BALANCED proposal, Mr. Obama?”

[…] And this one from Branco via Legal Insurrection: […]

Excellent depiction of the GOP choices.

Dear Mr.Speaker Boehner: To be a tad insensitive here,Boyo, this conservative is weary of your voice, your yap, your tan and your dance. Get someone with World-Class Balls to LEAD no-matter-what. Get it?