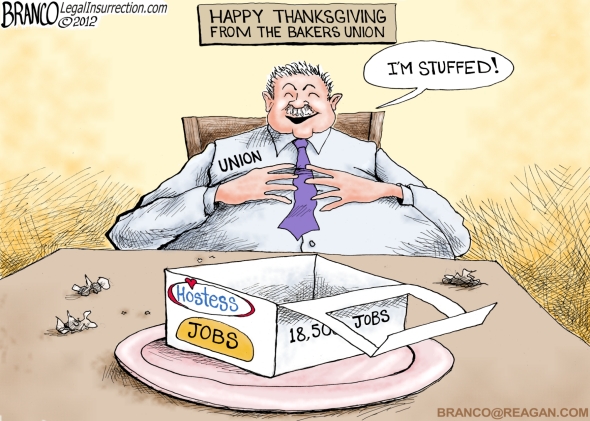 I guess that elevates the baker’s union to the status of role model for the low information voter. When the judge says there is no option for them to get more money, what did they expect?

A bailout from Øbama? Hint to thugs: the election is over. He doesn’t need you anymore. Suckers.

No. The rank and file are “stuffed”…in that bad, bad way.

Their president stays part of The Princes Of Labor.

Reminds me of the UPS strike. UPS did not hire as many people they wanted and the current workers lost out on their bonus.

Stupid is as stupid does.

I could enjoy feasting upon Branco cartoons all day long, and always have room for more!

Kirsten Powers was on Special Report last night, advocating for the right of gathering at places, or associating or organizing. She says this is part of the rights of workers to organize. “If Wal-Mart wants to stave this off they can respond to their grievances … with better pay and better health care”.

“The point is they can collectively negotiate, that’s how they get power”.

The whole idea of collective bargaining as a civil right needs to be over-ruled. Doing damage to a business at a crucial time is not much different than knee-capping or slashing tires. It is coercion by threat of harm.

Why can’t companies make it part of the contract to work, that the workers won’t organize as a group to do harm to the company, in order to extract special favors? A company hires a work force (and trains them and “organizes” them) specifically to act in the interest of the company. Once entered into that process, it becomes a destructive action to plot coercive blockades against the company, to extract extras AFTER the company invests in the worker’s employment.

To rephrase Kirsten … “they” get power by sabotaging the company from within, AFTER the company makes a hiring agreement and invests in the worker, and relies on him.

It seems anti-trust laws are where the battle needs to be fought, at least for public unions. This article hits on that.

“Labor unions like to portray collective bargaining as a basic civil liberty, akin to the freedoms of speech, press, assembly and religion. For a teachers union, collective bargaining means that suppliers of teacher services to all public school systems in a state—or even across states—can collude with regard to acceptable wages, benefits and working conditions. An analogy for business would be for all providers of airline transportation to assemble to fix ticket prices, capacity and so on. From this perspective, collective bargaining on a broad scale is more similar to an antitrust violation than to a civil liberty.

“None is better than half a loaf.”

But what if those options go together? They lose the sponge cake job … AND with it goes the creamy filling BIG pay.

well, after 58 weeks, or whatever the unemployment comp is now … and then they can get welfare forever? Maybe they can get disability for extreme mental abuse from twinkie jokesters on blogs. 🙂

I love this cartoon!