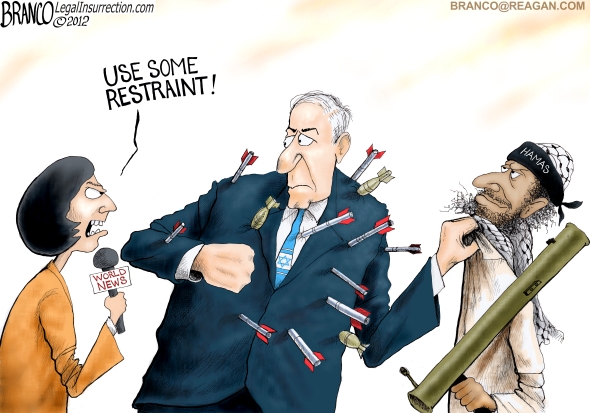 It is just amazing how the left and Europe are all ♥ for Hamas.

Remember: “The enemy of my enemy is my friend.”

A reconstitution of Axis powers? Perhaps. However, this time, the Jews are armed and defiant. They will not permit another decade to pass, let alone another thousand years.

Development is stunted when there is a dissociation of risk. The press, isolated from reality, may require another thousand years to evolve.

Oh, how I’d love to see the next panel (where Bibi nails her in the chops with his fist).

How about Bibi grabs them both and knocks their heads together, knocking them both out.

That would be okay, but a fist slap would really be satisfying.

Ah, the perfect solution to the Hamas vs. Israel dilemma! Since our so-called media believes, with its whole being, that those Hamas rockets are mere nits and otherwise harmless, then Israel should use those self same rockets and proclaim that it return fire rocket for rocket at Gaza for each fired at Israel.

It’s so darned difficult to realize that peace will only come to the Middle East when the Arabs decide they would be willing to live near their hated foe, the Israelis. Since that seems impossible, perhaps there’s something in the water their drink or in the air those Arabs breathe.

Arabs don’t want to live near Israelis because they look so bad and barbaric by comparison.