Anti-Mourdock polling games in Indiana? (Update – Rasmussen has 3 pt spread, not 11 like Howey)

Anti-Mourdock polling games in Indiana? (Update – Rasmussen has 3 pt spread, not 11 like Howey)

A poll was released yesterday by the Howey Politics website in Indiana purporting to show Democrat Joe Donnelly up by 11 points over Richard Mourdock.

That seemed improbable, even with the controversy over Mourdock’s recent comments, as Indiana is a heavily Republican-voting state, will vote strongly for Romney, and all other polling (which is limited in Indiana) showed a dead heat even days after the controversy.

Howey is relentlessly hostile to Mourdock, something I have seen since I first started following the Indiana primary last fall.  The poll was conducted by a Democratic and Republican pollster, but the Mourdock campaign is crying foul and demanding release of the unweighted polling data and cross-tabs:

“Fred Yang is a well-known Democrat who works for the DSCC and has a clear conflict of interest in this race. Christine Matthews is backpedaling on this poll. Brian Howey scrambled together a conference call this morning to defend his weighted poll data, but said he won’t release the original, unweighted data and cross tabs. Given these facts, Hoosiers have every right to be skeptical of this survey and we call on Brian Howey to change his position and release the unweighted data and cross tabs of this alleged poll.” Deputy Campaign Manager Brose McVey said.

The Republican half of the polling team is a little wobbly on the meaning of the poll, although apparently she says she is not “backpedaling”: 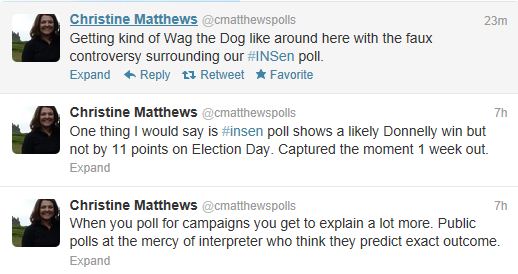 Another Indiana blogger is suspicious as well.  As of this writing Howey is refusing to release the unweighted results.

Update:  Mourdock’s own polling, by McLaughlin and Associates, shows Mourdock up by 2 points.

Also, Rasmussen just released a poll showing Donnelly up by 3 points.  That’s believable, and well within reach of Mourdock if there is a strong evangelical and Tea Party turnout (Lugar Republicans are trying to undermine Mourdock):

The latest Rasmussen Reports telephone survey of Likely Indiana Voters shows Donnelly with 45% support to Mourdock’s 42%. A surprisingly large number of voters either prefer another candidate in the race (6%) or remain undecided (6%).

Reports are now that the UN ‘observers’ may have been given diplomatic status so they will have immunity from laws requiring them to stay out of polling locations.

Diplomatic status does not allow the diplomat to go where he wants. I see no reason he cannot still be shut out of the polls.

Good luck to ’em if they try that here in Iowa. They’ve already been served notice that they are not welcome.

If I understand diplomatic immunity correctly, it protects foreign nationals from prosecution for breaking the law. Our LEOs will protect them ex ante. They’ll never get through the doors.

Operation Demoralize by the press and their polling outfits, no doubt. They’ve got to do their part in helping Harry Reid retain his Democrat majority in the Senate to save their precious Obamacare.

Keep on running 20 yards past the finish line.

Women are coming forward to support Mourduck. But not just any woman, several who have been conceived in rape.

Feminists and Liberals do not seem to care about them these days.

I don’t understand why Mourdock’s words were at all controversial. Doesn’t every version of Xianity, Islam, and Judaism say that every pregnancy is God’s doing? The Talmud says that every person has three parents: the father, the mother, and God, because all three are necessary for the pregnancy to happen. I thought that was utterly uncontroversial among believers. So how can anyone object to Mourdock saying so, without being hostile to all religion?

Hello fellow Republicans. Especially those of you who are of the “evangelical” school. Follow this conversation:

– Journalist/Questioner:
“So, what about rape? And everything/anything associated with it? Your thoughts about rape in any context?”

– Journalist:
“But, what about pregnancy and rape?”

– Journalist:
“Do you agree with the Feminist position regarding rape?”

– Journalist:
“OK, what about Abortion? Especially abortion and rape?”

Do you think you can get the point, Mr Mourdock? Because right about now you’re going down in Wikipedia right next to Christine “I am not a witch” O’Donnell and that Missouri “you can’t get pregnant from rape” Akins guy and all the other people with big-ass letter “L”s on their forehead.

It would really help if these folks would help us Republicans take the US Senate, you know what I mean?

I met a young lady who was the product of a 15 year old prostitute & a customer.
Surely this is rape on all counts.

She was adopted out at 18months old to a wonderful family.

She admits to times of sadness but also of joy & ultimate gratitude.

Why is it so many conservative Republicans haven’t enough sense not to say things, true or untrue, at election time that can serve no purpose whatsoever other than to cause firestorm of opposition? It is a tragedy that stupid and unnecessary remarks by Aiken and Mourdock might cause Harry Reid and his commie buddies to keep control of the Senate and help bring about the final destruction of America. They are pitiful.