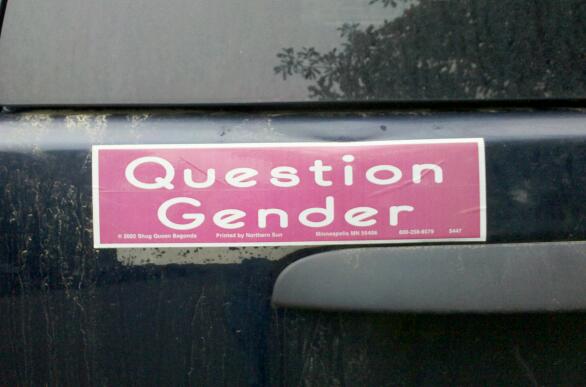 [Note – this post was supposed to run at 7:00 a.m. today, but I scheduled it incorrectly.  It actually went live around 9 a.m.]

Maybe this is a Latin or linguistics professor.

Was the driver confused about his/her/its gender?

“And when the man dances, certainly, boys, what else? The piper pays him!”

Or, is it a woman who dances? What say you, girls?

My dog barks at men, not women. And he knows the difference from 50 feet away through a car window. This new meme that ‘gender is a state of mind’ is bs. The dog knows.

Rose, your comment made me remember an objective case of a personal pronoun gender fender bender involving my Japanese wife’s quasi-English and our old dog. Hadn’t thought of it in years!

We had a huge German Shepherd named Sebastian. He was huge, and his size intimidated people, but he had the sweetest temperment I’ve ever seen in a dog and was a giant, loving puppy at heart until the day he died. If someone looked at him at their eyes met his, he immediately wanted to stand up on his hind legs and lick their face affectionately.

My wife was walking him one day and an elderly lady approached them on the sidewalk. As they got closer and closer, my wife recognized Sebastian’s body language … it meant he wanted to jump up and kiss the approaching lady.

When they were within a few feet, my wife pulled back on the leash and the woman cowered a tiny bit in fear at the large dog with an obvious interest in her.

“Leave him alone!!!” my wife said she barked.

My wife said the woman gave her an incredulous look, as if to say, “How in the hell could I possibly bother your dog??!!!”

My wife said after puzzling over the woman’s strange reaction, she realized about a half-block later what she’d said, using “him” instead of “her.”

I overheard her latest assault on language just a few days ago when our youngest daughter was telling her that our daughter’s friend wasn’t available to play one day.

And if she doesn’t answer, ask him again.

The thinking behind this is that gender is no longer determined by hardware, which can be surgically ‘fixed’, but by the way you feel in your heart.

O/T – When we neuter a dog, why do we call it ‘fixing’ him? Everything worked fine – what we are doing is breaking him.

And what if we already are?

Gender has a lot to answer for.

Evolutionary principles are articles of faith. While evolution as a description of origin is an indelible fact.

Of course, the latter can neither be tested nor reproduced. We’ll leave the debate about scientific integrity to the philosophers.

“While evolution as a description of origin is an indelible fact.”