Attendees at a Racine, Wisc., Tea Party rally Saturday were met with a parking lots full of nails deliberately placed there early in the morning before the event, which I attended.

This incident adds to a week where a gay Republican campaign worker was brutally beaten and, in a separate incident, a son of a local state senator was hospitalized after defending his Romney sign after two people attempted to remove it from his yard.

Nancy Milholland, one of the organizers of the rally, said she was shocked to find the nails littering the lots when she arrived early to set up. A man caught the license plates of a van covered with Obama stickers leaving the scene, but police reportedly refused to take the information because there was no evidence of the van actually being connected to the incident.

The Tea Party attendees picked up as many of the nails as they could, although many of their tires had been punctured, and left the pile for all to see: 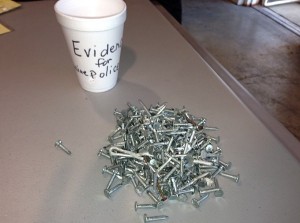 The rally continued, with 2,500 activists filling the venue, which is located not far from Paul Ryan’s town, Janesville. Tommy Thompson, who is running against one of the most extreme members of the U.S. House for the senate seat, Tammy Baldwin, gave a spirited speech calling on Wisconsinites once again to fight for their state and their country’s freedom.

Thompson himself had recently received the rousing endorsement of former New York City Mayor Rudy Giulinani in a conference call last week. Giuliani spoke of Thompson’s aid to New York in the hours and days immediately following the September 11 attacks. Baldwin, meanwhile, was one of 11 representatives to refrain from voting in favor of a resolution to condemn Ahmadinejad. The choice between the two could not be clearer.

I use “trail cams” out in the woods to watch the deer or turkeys. Any place having a Tea Party event might need a small motion activated camera to catch any late night turkeys out trying to disrupt the democratic process.

Well, Tommy Thompson is now ahead a point in Wisconsin. With him being a popular former statewide winner along with someone like Ryan who is in a Democrat district gaining crossover votes in his current district AND someone like nonscary moderate Mitt will probably end in a win for the Republicans in Wisconsin.

rudiment Guliani came out against Tammy B painting her by her own words re 9/11.

I’m shocked, shocked to hear that Democrat-progressive-Marxist would try such a stunt. Flabbergasted. The attendees are fortunate the nails were placed after the rally started. But since these are gutless cowards, that isn’t going to happen.

Do recall that the son of a state senator went to prison for slashing the tires of vans rented for Republican get-out-the-vote efforts in previous elections.

Whoops, make that “nails weren’t placed after the rally started.”

It’s time to “Nail” these thugs to the wall on November 6th.

So now the tea party is picking up the other side’s malicious trash as well.

It must be remembered, sadly, that due to gov’t workers being given the right to unionize there are Police unions and they are as partisan and disdainful of the public weal as any thug from seiu.

I don’t mean that ALL are but many is enough to be concerned about how zealous the police will be in the pursuit of potential union members crimes/criminal acts.

They demonstrated this during the showdown in Madison and the recall.

If your police dept is unionized (and many aren’t) then you should be wary about relying on them to do their duty and find those who would thwart the political process in the name of unionism. (which is socialist/communist in nature).

The Police and Fire Departments, public safety if you will, were exempt from Governor Walker’s attempt to end collective bargaining from public sector unions. My suspicion is that he was afraid those unions would be happy to make the rest of us unsafe if they lost their rights. People with guns usually don’t like to have things taken away from them.

It is the religion of “peace”….

Wait, let me get this straight:

“[P]olice reportedly refused to take the information because there was no evidence of the van actually being connected to the incident.”

Every citizen in that local Police District should call up the police department and DEMAND that either the officer who refused to do his JOB be IMMEDIATELY FIRED or that the Chief of Police resign on that officers behalf.

Also, letters to the editor saying that the refusal of the Police to do their JOBS means that it’s time for the local city government to open an investigation for CORRUPTION.

That ought to get you some movement REALLY, REALLY quickly.

By the way, the Racine, Wisconsin Police Department has a direct link on the website to a “Citizen Complaint Form” which goes DIRECTLY to Internal Affairs.

I would suggest that EVERY person who had a tire punctured at the Rally should complete one, include the name of the Officer who refused to take the information on the Obama Van, and see that an investigation is opened. Make sure that you note that you want the investigation to be PUBLIC.

The link to the PDF of the form is on the left. Helpfully it’s available in both English and Spanish.

A man caught the license plates of a van covered with Obama stickers leaving the scene, but police reportedly refused to take the information because there was no evidence of the van actually being connected to the incident.

What’s the harm in running the plates and interviewing the van’s owner? At worst it’s a waste of a couple of hours time. At best you catch the person who did it. Gee, tough call there.

You know if the roles had been reversed and it was a liberal rally and a van leaving with Romney stickers, the license plate would have been checked and the person’s name and address made public via every imaginable media available.

They told me that if I voted for McCain there would be attempts at voter intimidation. | Daily Pundit | October 28, 2012 at 4:19 pm

OK Folks...Here's what you can expect from the Obama Thugs, These already Happened - US Message Board - Political Discussion Forum | October 28, 2012 at 7:08 pm

[…] Read it. Attendees at a Racine, Wisc., Tea Party rally Saturday were met with a parking lots full of nails deliberately placed there early in the morning before the event, which I attended. […]

People who are losing an argument tend to turn to tack-y measures.

There’s a chance that some of the nails were actually left behind in that van. The police should have taken the tip seriously.

Remember 2004? That’s when ACORN hit the big-time news and the conspiracy was “outed” after they slashed tires of Republican “get out the vote” vans. (And, true to form, “W” did nothing. No doubt Karl Rove was afraid of offending their Democratic allies — No Child Left Behind, Education, Amnesty — across the aisle.)

[…] Things are getting nasty in Wisconsin. Attendees at a Racine, Wisc., Tea Party rally Saturday were met with a parking lots full of nails […]

Typical stunt by Democrats. They can’t stand it when someone provides reasons why Democrats shouldn’t be voted into office so they do these kinds of things. They are acting exactly like union thugs who will do the same thing.