Obama wants to create a Department of Business in his second term.

After a day of fun and frolic in St. Louis we drove back to Illinois to discover East St. Louis has renamed its BUSINESS DISTRICT Barack Obama Avenue. Will get a photo of it for you of the bombed out buildings on Barack Obama Ave– PRICELESS

Here are a couple of the images the reader sent: 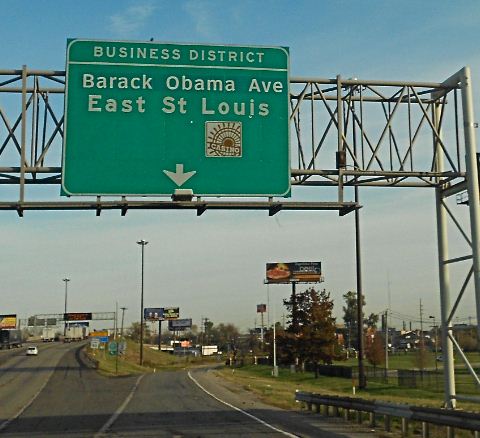 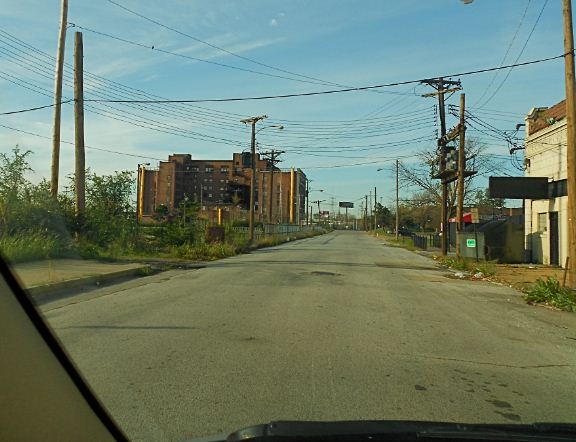 There was a building in near perfect shape, though: 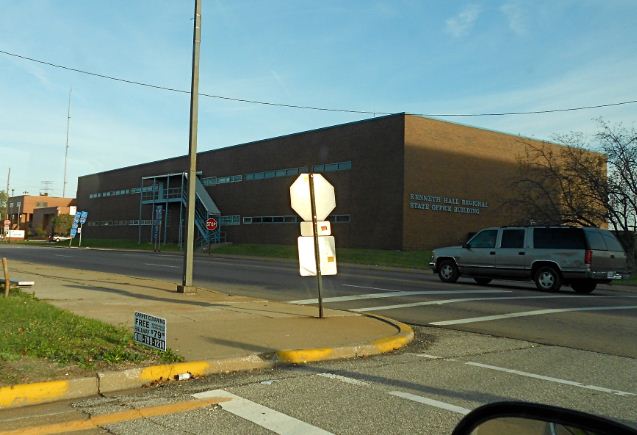 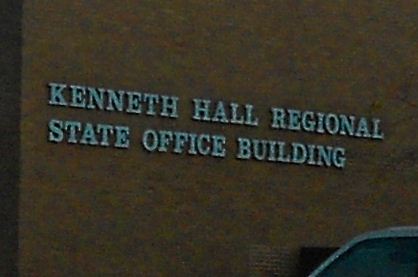 We already have the Barack Obama Business District a mile east of here, stretching for about three miles along what used to be a thriving boulevard. Now?

It’s a sign of the times, or my name is Petula.

When I heard about this VERY last-minute notion of Pres. Not Optimal, all I could do was shake my head.

So very typical. He imagines a problem (partly), which he identifies as too much bureaucracy. (An issues, yes; hardly the cause of our poor economy.)

East St. Louis and Bambi deserve each other. I hope they’ll be very happy together.

Say, d’ya think he might move there in January? ;-p

Obama is our national disaster.

Someone drove into E. St. Louis.

You’re a brave, brave soul. I used to go to school in Cahokia, not far from there. E. St. Louis was a no-go zone for us. And as I recall, that was the time frame when the fire department and ambulance services also considered certain sections no-go zones, as they would take fire from the criminal elements.

On our way to visit our daughter and son-in-law in 1986, at Jacksonville Naval Airstation, we took a wrong turn and ended up in East St. Louis. With Nebraska Plates, we must have been quite the sight. All of the people stared at us. I told my mom to lock her door, and we got the heck out of there as soon as we could. I can’t imagine why anyone ther would vote for Obama as he is part of the problem, not the solution. Remember it was the Democrats who were responsible for the KKK and Jim Crow laws. How stupid can some people be?

My dad went to medical school in St. Louis in the mid-to-late ’40s. Traveled by train… He had a saying that he would use at certain times, “I’ve been around; I’ve been to East Saint Louis.”

Obviously hasn’t changed much in 60 years.

What a load of crap!

Barack did not build that.

What our socialist / Marxist politicians would build would more closely resemble North Korea, Cuba or Haiti.

Speaking of which, if liberal college students and those creepy Children of Bernadine Dorhn kids know so much, then lets send them to Haiti and tell them that they can keep 25% of any increase in GDP they manage to squeak out.

Actually, I’m thinking it WOULD look a lot like downtown Moscow during the Stalin era.

Democrats, liberals, socialists have to lie about their intentions. I suppose that even if the truth were ever told, there are some knuckleheads who’d vote for them, genuinely believing that there is a Free Lunch at someone else’s expense. But most would see through the Democrat lies.

Democrats, the People of the Lie.

We watch “Hardcore Pawn”, it is a pawn shop located in the heart of Detroit. Talk about a p poor place to be. The customers are really something to see. And for some reason I do believe that they are voting for Obozo. Lots of ladies-of-the-evening and their pimps. Strung out people and people who probably shouldn’t be allowed to vote. I have read that parts of Detroit don’t even have drive-bys by the police, because the blacks there will stop the police car and kill the occupants, and the demonrats want us to give these kind of people more benefits. What a waste of taxpayers’ money.

Yikes … twice as bad as Detroit. No thanks Barack.

This morning on I-440, the loop which runs through the south and west side of Nashville, there was this banner on an overpass:

On my return trip, I looked for it, so I could return and photograph it, but I didn’t see it from the opposite side. Perhaps, Metro Nashville removed it. But, I’m planning my errands to take me back to I-440 tomorrow. If I spot it, I’ll pull off to the side of the road and zoom in for a tight shot. This clever rhyme must be recorded for posterity.

Grew up in StL. It’s just sad what Dems have done. Went to East StL once for about 20 minutes. I heard 3 gun shots.

…and the bureauweenies in that government building get more (taxpayer) money in salaries and gold-plated benefits that all the former employees of all the businesses destroyed by d-cRAT socialism COMBINED.

Is it just me, or are they using a strict Soviet motiff ?

Actually, Moscow was much nicer than this…even Bratislava was much nicer. The eastern bloc governments just re-purposed the tsarist or Hapsburg buildings, usually putting a big red star somewhere on the roofline. They didn’t tear them down; they had no idea what “urban renewal” was.

I can tell you exactly what it would look like: East Berlin in the mid-sixties. Stationed in Europe then, I visited the place. It had been built with a bureaucratic vision of the grandiose; it was completely, laughably outsized. Streets were wide, many boulevard-like…and empty. Relatively speaking, there were few people and even less traffic, though there were traffic control policemen at intersections. The few automobiles were tiny and there were no gas stations. Buildings were grey, featureless, monolithic, concrete blocks with rows of blank windows that were accessed by uninspiring entryways. And it was still, not just quiet: still.

Twenty five years had passed since the end of the war and vacant lots and old buildings were also plentiful. They, and everything else, were all spotless, spic and span, not a single piece of trash or waste paper to be seen anywhere, though these buildings were dilapidated, and I remember very vividly (why?), that many had weeds or small trees growing from their gutters and roof tops. The contrast with West Berlin, just through the wall at Checkpoint Charlie, was breathtaking. Lights, colors, architectural variety, people, cars and trucks big and small, music, noise, magazines, newspapers…life. The contrast was staggering; it is one of life’s lessons I’ve never forgotten.

We have a wonderful example of such a place right here in the United States: the state capitol office building complex in Albany, New York. The buildings are tall, grandiose, window-filled, concrete monoliths—they tower over everything around them—growing out of a broad concrete plaza with sweeping steps everywhere. There’s nothing else like it anywhere around. It, like East Berlin in 1965, is a soulless, cold, depressing, creepy place.

East Berlin was built by vengeful, bitter men intent upon wiping out a culture; their justification cannot be argued. Similarly, the reconstruction of West Berlin was overseen by people exposed to the same motives, but people who resisted–and it was difficult–but overcame the need for revenge. Our president’s view of America seems to contain a hidden vengeful, bitter streak that exposes itself far too often. I believe a government, a set of laws, a judiciary, a legislature, a police department, a health care system, a bureaucracy, or anything else he has built, or would build, does and will resemble East those of Germany in the nineteen sixties. Including a business district.

One thing, though…I don’t believe those policemen were there for “traffic control”. At least not as we understand it.

Oh geez, I drove through that area last fall. Cahokia Illinois to check out the first college I went to, Parks College of SLU. The place was boarded up. Yeah, that area is pretty much Mogadishu poor. I rolled through red lights……..

We have to go through East Saint Louis when we drive to the Gateway City from here. Our doors are always locked and windows up. It looks like a war zone…block and blocks of rubble-strewn vacant land punctuated by the occasional hollowed-out shell of an empty building. They ought to rename it West Detroit.