The Washington Post, whose Mark Jenkins (also of NPR) gave 1.5 stars to the Andrew Breitbart documentary Hating Breitbart, has now erased all user reviews from their website, according to the movie’s producer Andrew Marcus. The documentary, which brought in the second-highest per-screen revenues in the country over the weekend, had such a successful run that it is now expanding beyond its initial four-market opening.

Marcus tweeted Wednesday morning, “WaPo flushed all of the positive reader reviews of Hating Breitbart down the memory hole!” with a link to the prior reviews that used to be on the site: 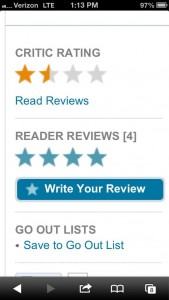 WaPo’s Mark Jenkins had nothing but derision for the man and the movie, writing in his review that “it’s hard to argue that he left a major legacy.”

I wonder if Jenkins would have had a different opinion had he been in the room with me in Denver, CO, filled with older “blue haired” ladies and businesspeople at a meeting about fracking put on by the Denver GOP. As the news spread around the room that Breitbart had passed away, the crowd of hundreds let out a gasp. The meeting was stopped as people took a moment to remember the man who inspired so many.

Breitbart created an army of citizen journalists, full of blue-haired old ladies, retired men and women, working moms, businessmen, and every other ilk other than those who went to journalism school. I’m one of them, and many of my friends entered into the scrum solely because of Breitbart’s influence. It is we who Mark Jenkins is attacking in his piece. For if Andrew Breitbart has no legacy, we don’t exist.

And apparently our reviews don’t exist either, as the Washington Post proves Andrew Breitbart’s point that our biggest enemy is, above all, with the so-called media. Since the deletions, users have begun reposting their reviews on the site.

Mark Jenkins: “it’s hard to argue that he left a major legacy.”

Must be a Republican conspiracy.

You know, hacking into the WaPo site and erasing all those reviews (if they even existed!), so those nasty, filthy, dirty Republicans (who everyone knows burn books every chance they get) can claim abuse and censorship.

Add this to the list. My next-most favorite review by the Washington Post is that of “Unfit for Command” which purported to “debunk” (the Post’s own word in a later story) the claims of the Swift Boat Veterans. The “debunking” was weak on its face.

One striking statement in the Post review was that the reporter couldn’t even tell why the Swift Boat Veterans disliked John Kerry or his purported autobiography. When I saw the book in the bookstore, the answer was laid out right at the beginning of the book: military people do not like to be libeled about their military service.

Funny–you reminded me that one of the most prominent Swift Boat “debunkers,” Wade Sanders, is now in prison for child pornography.

I submitted my review. I’ll see what happens.

Breitbart.com has a USA ranking of 292 in traffic per Alexa. That is an impressively high ranking for a start-up news organization, and it’s growing.

Breitbart didn’t leave a legacy? May the Old Stream dying media continue to live in their fantasy world which will accelerate their rendezvous with the ash heap of history.

I give WaPo 5 Warrens (very negative).

A peon from the old school poor mouths a founding father of the new school. It’s like a 1952 radio saying TV will never catch on.

Just another nail in the credibility coffin of the MSM.

In order to squelch the “noise” of the naysayers, eliminate all reference to their cause no matter how just it might be.

The day of reckoning is approaching and hopefully a fresh breeze from a Romney White House will give the nation time to pause a new direction.

Who is Mark Jenkins?

What would be his legacy?

I Googled him, and Google came back with “Why?”

I’m one of those “blue haired” ladies (blonde, actually, and at great cost!) who is part of Andrew’s legacy.

Andrew showed me that I didn’t have to be afraid of the P.C. crowd- that I could fight back and that I NEEDED to fight back, for myself, for my children and for my unborn grandchildren!

Seven new four-star reviews are up at the WaPo site.

The “Threat” to old-line media and once-venerable franchises such as the New York Times (gray lady), CBS (tiffany network), Washington Post, etc., would be much less than it is, even with the internet and cable, if these organizations had been doing their jobs objectively and with competence.

It is ever thus. For some reason, very few of the old guard are capable of adjusting. Those who do, prosper beyond their wildest dreams. Those who don’t become irrelevant, bitter, and hate-filled at their lost empires.

The characters are made up, but the ALAM (Assn. of Licensed Automobile Manufacturers, a highly unethical legal dodge to drive Henry Ford out of business), Henry Ford, and the tribulations of the new industry are very real.

Human nature never changes. It just wears the clothing of its era.

Since the deletions, users have begun reposting their reviews on the site.

That is how you win.

[…] “Hating Breitbart.” The user reviews had previously been deleted from the site last week, although a negative review from their on-staff reporter […]