Optimism is sweeping the country unexpectedly (via Drudge):

U.S. consumer sentiment unexpectedly rose to its highest level in five years in October as consumers became more optimistic about the overall economy in a possible boost to President Obama’s reelection hopes next month….

The Thomson Reuters/University of Michigan’s preliminary October reading on the overall index on consumer sentiment came in at 83.1, up from 78.3 the month before, and the highest since September 2007, the survey showed on Friday.

It was well above the median forecast for a slight decline to 78 among economists polled by Reuters.

The new buoyancy among consumers comes shortly after the U.S. unemployment rate tumbled to its lowest level in nearly four years in September as more people returned to the workforce and found jobs than economist had predicted….

Consumer sentiment rose to its highest level in five years on Friday and may have signaled something that will make economic skeptics spit at their screens and scrawl lengthy screeds into comments fields well after Election Day.

A gauge of consumer sentiment jumped higher in early October, pushing past Wall Street’s expectations, according to reports on the University of Michigan-Thomson Reuters consumer-sentiment gauge released Friday. The UMich sentiment gauge rose to 83.1 in a preliminary October reading from a final September reading of 78.3. Economists polled by MarketWatch had expected little change, anticipating the index to decline to 78 in early October.

All the economists are shocked. There is nothing economically that would justify such a bounce. The October 5 jobs report release, which at best was a mixed bag, can’t possibly explain the jump.

But there is something that may explain it.

The unexpected bounce in consumer sentiment coincides with the aftermath of the October 3 debate, after which Romney has soared in the polls. 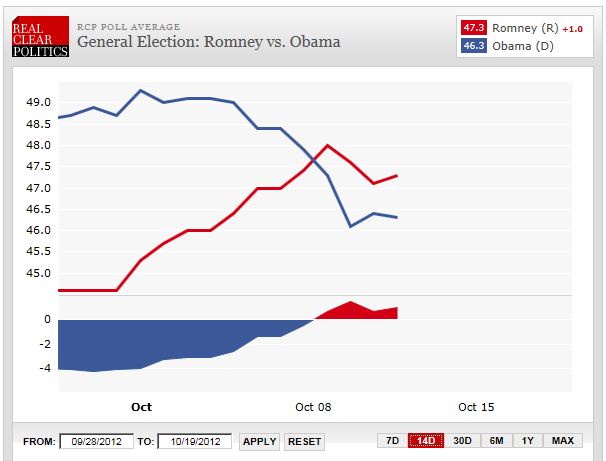 With economists scratching their heads for an economic explanation, the rise of Romney is just as plausible.  People are feeling more confident, spending more, engaging in more economic activity, and planning more.

Obama is being given credit for an unexpected bounce in consumer sentiment which may be driven by the possibility that Obama will be defeated.

That seems the likeliest reason. I saw a bumper sticker last night that said something like “Republicans want to keep 10 million people out of work so they can get one man out of his job.” Utter nonsense and graphs like this show it.

Republicans almost always and everywhere root for a strong economy, even if it’s a Democrat in the WH. Consumer sentiment and even hiring may be up (the jobs numbers are too fuzzy) because decision makers are anticipating a Romney/Ryan win and a return to real world policies.

I’ve thought the Romney campaign is a potential Catch-22.

If it looks like Romney will win, confidence will increase, creating a talking-point for Obama & Co.

The danger here is that we get the cart before the horse.

BUT, as I’ve said here more than once…

Sea change election, followed the NEXT DAY by a resurgence of optimism and explosive growth.

I know that I will have a lot more confidence if Obama loses. Right now our little business is treading water (at best), buoyed along with way too much personal money. One thing is certain: if we have another four years like the past four, it’ll be the ruination of our enterprise – and I suspect that scenario would be replayed in thousands of cities and towns across the country.

Surely Romney’s campaign or at least one or more PACs will play up the debate angle. Hopefully there are already polls or they can quickly buy polls (pay for) that will flesh out the real details for the spike in confidence. Not hard to do.

I think the real possibility of ending the Obama regime is the most likely explanation.

This slight uptick in confidence won’t help Obama, coming as it does at the end of the campaign.

The only thing I have left to do is wait for some Black Friday deals — and then I am all done with the exception of a few inevitable last minute Christmas things.

Why is it so ‘spectacularly shocking’ that many other people across the entire country are starting to do the same thing too?

Could this possibly be the reason that Wal-Mart and K-Mart are pushing their lay-away programs?

I’ve often thought that the economic plummet in September 2008 (when McCain was stupid enough to suggest “suspending” the campaign) was the market’s recognition that Obama was going to win.

Could this mean that this uptick is a result of increasing expectation that Obama will lose, leading to a greater likelihood that he wins?? This could result in a tear in the space-time continuum!!

I see this daily in my humble little Central California town:

* Markedly increased hope in Obamas failure on 11/6
* Discussions about “after Romney & Ryan take charge” are very upbeat.
* People have told me they are ALREADY SPENDING MORE to “catch wave” of a REVITALIZED FEDERAL GOVERNMENT THAT WORKS FOR THEM and LEAVES THEM ALONE BUT FOR “EVEN PLAYING FIELD”
* I have experienced this phenomenon myself.

WE ARE COMING TO APPRECIATE JUST “HOW FAR” WE HAVE FALLEN IN FOUR YEARS, AND WE WILL NOT PURSUE FAILED POLICIES AND CORRUPT OFFICIALS. [Of course, on a state level, I have not got one good word to say, but that’s CA for you.]

I almost hope that the unexpected bounce in consumer sentiment isn’t driven by the possibility that Obama will be defeated, because if Obama should prevail, we will have a double dip recession.

Like I’ve been saying: “I can see November 6 from my backyard!”

So what they’re saying is that consumers haven’t been this optimistic since Bush was president.

With economists scratching their heads for an economic explanation, the rise of Romney is just as plausible. People are feeling more confident, spending more, engaging in more economic activity, and planning more.

Obama is being given credit for an unexpected bounce in consumer sentiment which may be driven by the possibility that Obama will be defeated.

It works for ME! I hope you’re right.

I agree. There is nothing really that otherwise explains an increase in consumer attitudes. Nothing in Economic news that would drive a better attitude. Jobs reports? Nah not really. Typical voters dont follow weekly new claims and the granular stuff.

Maybe its the obverse of what we saw in 2008.
So you can see…select 2008 Begin/2008 End on this page.
Notice what happened to weekly claims beginning in November.
My point is unexpected things do happen.

Looks to me that the O’bammy propaganda apparatus is now in full gear manipulating all sorts of “statistics.”

“Nothing to see here folks,” as they are shepherded to the voting machines that only have one option.

At least that is their dream…

Professor: I could not agree with you more. My husband is poised to accept a higher risk position shortly, because we both feel this company will expand rapidly once Romney is in place.

People have been on a cash strike. MUT’s Prediction of the Day (special for Legal Insurrection fans only): Nov. 10 and 11 (the weekend after the election) is going to be madness at retail stores.

[…] William Jacobson offers the RCP chart below and reports that the more people think Obama could lose, the higher consumer confidence goes up. Funny that. […]

Business is still down at my company, and the speculators on wall street still forecast a recession after January because of the Taxageddon. But I know my own personal optimism has started to rise as I’ve seen the polls starting to swing strongly for Mitt. But I’m still not making big investments until after November 7. Don’t assume anything with this gang of thugs. The October Surprise is still coming. Continue to work for the complete destruction of the DNC. We need a huge mandate going forward.

I am so strung out with regular monthly expenses and college payments, I see no hope in sight. If those tax cuts expire and we have to kick in 14,000 more, I will be poorer than the nearest EBT card holder.

They are clearly full of [email protected]#t about the housing prices and market recovery. I now have zero equity after 4 years of freefall.

Gas, Food and Heating Oil prices are sneaking up daily. I think it’s going to get worse before it gets better. Prices are unlikely to come down, at this point before winter.

Unfortunately, the entire Democratic Party, 1% Liberals and 47 percent of the people don’t get it. Our Middle Class back is broken.

What on earth does “consumer sentiment” mean? Everyone, even the great unwashed, has a “sentiment” (an opinion based mainly on emotion instead of reason) about the economy.
It ranks right along with “cautiously optimistic.”

The Absurd Report » Unexpected jump in consumer sentiment coincides with polls showing Obama could lose by William A. Jacobson | October 17, 2012 at 8:21 am