The Anger Versus Optimism Election

The Anger Versus Optimism Election

This is not a Drudge photo juxtaposition.

It’s the Des Moines Register, intentionally or not summing up this entire election.

Fear versus hope, anger versus optimism, Obama versus Romney: 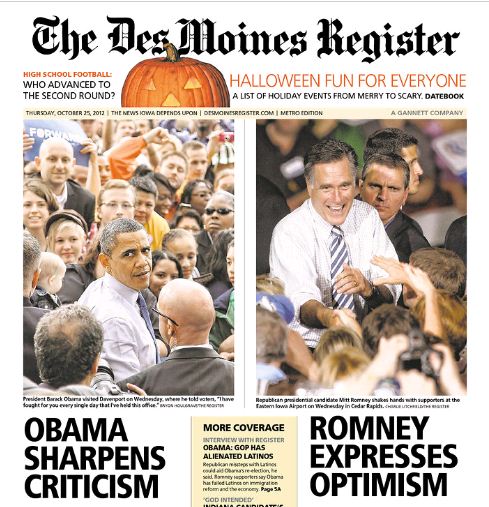 But it is a choice between Decline and Growth, and we know how it works out if we choose unwisely from Indiana Jones…

Romney’s advisors have a clear startegy. Act as if. (You are winning) Stay positive. And it seems Obama’s team has realized that and is trying to take that power away. Why else would they have Obama saying yet another ‘Romnesia’ line (dopey as they all are) about actually being ahead in a close race. I’m waiting for the claim of ‘liar’ to follow about who is ahead (from Obama). This has become the tale of two campaigns, one focused and upbeat and the other scrambling and childish at times.

That does not look like the front page of a paper with an editorial board that plans to endorse Obama on Sunday.

Yesterday, the top story on Memeorandum all day was that the Des Moines Register very publicly criticized Obama for doing an “off the record” phone interview with them. Bill O’Reilly invited people from the paper to appear on his show last night to discuss. When they declined his invitation, O’Reilly took to the airwaves last night to say he believed the reason why they would not appear on his show is because the paper is still going to endorse Obama in their Sunday editorial.

While O’Reilly’s theory sounded plausible, I remember thinking how conceited for O’Reilly to believe that just because they declined his invitation it had to be because they are going to endorse Obama. Why would they “pre-announce” their endorsement on his show – knowing full well they would not be given ample time to explain their rationale? The paper endorsed Obama in 2008. If they do plan to endorse Romney this time, I suspect they would rather explain why they are changing horses on their own terms in a carefully written editorial rather than having to put up with a pushy interviewer constantly interrupting them in a 3-5 minute interview.

It’s going to be interesting to see who they endorse.

Mag…Yep, Billy O’s been on a tear lately. EGO out front. Overruling most conservative guests with his O’Reilly ‘Say So’. He was just fit-to-be-tied over Mitt not ripping Obama a new backside over Benghazi on Debate-3. That, despite some conservative adults s’plaining to Billy that it was a well-thought-out and very smart move.

Ahhhhhh…Watching the World Series Game-1 last night was far less agitating than William the Must Be HEARD. I’ll take that ‘leave’ tonight, as well. (-:

As long as we’re doing a comparison/contrast, over at Weekly Standard there’s a brief article about obama calling Romney a “bullsh****.” Those of you who have been around will, perhaps, recognize my observation: The thing about a bullsh**** is sooner or later they sink in their own bullsh**. Uhmmmm. Obama sinking; Romney’s rising. So, who’s the bullsh****?!

Alman: Obserervation. Both [email protected] & newspapers float. At least until they reach full saturation. O’bowelmovement is way past ful saturation.

“You know, I actually believe my own bulls–t,”

Oh to be a fly on the Oval Office wall when a staffer shows this to Pres Hissy Fit. Think Clinton will be blamed for this too?

Jay-Z vs. AMERICA the Beautiful…

The people that show up for Obama of course get all jazzed when Barack does his trash talking routine. And Obama himself then gets even more deluded about how America loves him. But The Register displays how the image is projected to the rest.

But negative ads work, and work better if rooted in truth. Powerful and well done exposure of the real evils of Obama need to run, as Romney paints vision. Obama’s Bain ads are running, and may be effective, but doesn’t coal country know better?

It seems there is a radical side of the unions that is more attached to some of the communist elements that spawned Obama. I’d guess that is Trumka and Stern. Beyond the radical, don’t a lot of union members recognize how destructive the Obama economy is?

The image shows Obama looking back over his shoulder, at his base perhaps? He is eviscerating coal production, blocks the XL pipeline, strangled offshore drilling, and the labor force steadily shrinks. I wonder if car man Romney has any cred with the unions. It does seem he has avoided attacking Obama’s union ties. In the debate, Romney did not attack the favorable union treatment in Obama’s GM bankruptcy.

Split screen still not doing the Obama team any favors.

You guys ought to know that the in San Diego at the NPR affiliate KPFK last night, some droning a$$hole was busy lying his head off about Romney’s last debate performance. That kind of thing can fool low-information voters, especially those who get their news from NPR.

The guy had nothing specific to say. He just kept repeating that Romney is simply a better liar than other Republicans, and that a vote for Romney will fail to protect women’s rights, and the extremists are coming……

I dipped in and out a couple of times flipping channels, and he was saying the same thing a few minutes later.

One cool thing; Consider this excerpt from the WH transcript of the Register interview (which Øbama initially didn’t want to make public):

***Partial Question: “… But particularly, sir, if you were granted a second term, how do you implode this partisan gridlock that has gripped Washington and Congress and basically our entire political structure right now?”

THE PRESIDENT: Well, Rick, let me answer you short term and long term. In the short term, the good news is that there’s going to be a forcing mechanism to deal with what is the central ideological argument in Washington right now, and that is: How much government do we have and how do we pay for it?

So when you combine the Bush tax cuts expiring, the sequester in place, the commitment of both myself and my opponent — at least Governor Romney claims that he wants to reduce the deficit — but we’re going to be in a position where I believe in the first six months we are going to solve that big piece of business.***

Remember that during the debate, the charlatan-in-chief said that sequestration “will not happen.” But the very next day, he’s talking to the Register like it’s a done deal.

Who’s flip is the flop on now?

Obama has developed the face of every dictator who has ruled with an iron fist.

This is a very damning photo setup. Obama can’t be happy.