High school teacher Debbie Polhemus took her own stand against free speech yesterday when she covered pro-Israel advertisements in a Washington, D.C, metro station with yellow sticky notes. Polhemus was not arrested or cited for vandalism.

In a similarly convoluted line of reasoning to New York subway attacker Mona Eltahawy, Polhemus was quoted as saying “This is a public space, and we don’t like hate speech…And not to do anything would be to allow this speech…it would be hurtful.”  The group behind the ads denies that they are anti-Islam, just anti-Jihadist.

The ads, the same ones as were placed in New York City subway stations by the American Freedom Defense Initiative, read “In any war between the Civilized Man and the Savage, Support the Civilized Man. Support Israel. Defeat Jihad.” A federal judge had ordered last Friday that they must be placed in the DC metro by 5pm Monday. The DC Metro had delayed placing the ads “due to global unrest about the anti-Islam video.”

Eltahawy, as expected, has been promoting the metro attacks on twitter. In a somewhat unintelligible conversation where she appears to say that she protested protected speech, Eltahawy describes her reaction: 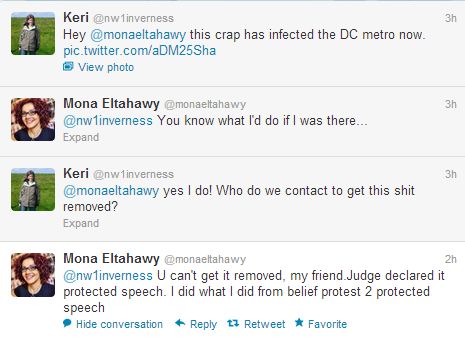 It seems that somehow the meaning of the First Amendment has been lost by both Polhemus and Eltahawy (and local transportation authorities). They prefer a sort of “might makes right” argument instead, and apparently the Constitution doesn’t apply when they’re in disagreement with the free speech.

Does it not occur to them to exercise their First Amendment rights and put up their own ads?

‘Course not … they have to save their money, to split between the Obama campaign and their $tarbuck$ habit.

My son’s history teacher assigned the presidential debate as homework.

She told the class it was a tie. Good grief.

I SUGGEST THAT THESE “ISLAM LOVING” “FREEDOM HATING” WOMEN GET FITTED FOR BURKAS AS QUICKLY AS POSSIBLE. Here’s one last effort to talk sense to the enemies of our Liberties:

” THE JOYS OF THE COMING SHARIA”
[BIG CHANGES COMING TO AMERICA!]

As a kind of a “public announcement”
Just a “heads up” for inquiring minds,
Perhaps we could “talk” for a minute,
‘Though we know you have so little time.
There are game shows to watch;
And those sports—What demands!
You could spend your whole life on TV
And hey, girl, who’s the hottest?
What’s the latest? Is it true what they said?
“Staying hip is much harder than it seems!

Well, we were all set for some silly election,
That we knew that Obama would win,
When those guys from the East got all crazy,
‘Cause they claimed that our movies were “sin”
Would they “cool it”, take a “chill pill”,
Or just “go with flow”? No, they went nuts!
Killed our guys, burned our flags, yelled all day!
All that sneering and strutting didn’t matter so much,
We all figured they’d just go away.
Then…their preachers said: “There’s hell to pay!

Now, you KNOW we are hip with religion–
“Live and let live” is our thing,
But the stuff they were screaming on Prime Time TV,
Was a “little bit much”, doncha think?
Still, we’re sure we can renounce the faith of our past,
After all, we’d “THE WON” as our God.
He was sexy and smart (with that teleprompter thing)
Every time that he spoke, we were AWED!
So if the MEDIA, and the STARS, and “Our Man”
Say “It’s cool”—we can quickly embrace a new law!

Part 3: One Last Effort for Freedom of Speech and Religion

Well, to get your new groove, we’re preparing
You now, to get this “great future” on track.
For the girls, it’s remarkably simply,
You can have any Burka that’s black!
True, you’ll not have the time to “keep current”
‘Cause your man keeps you flat on your back!
Now you guys may get fit with a collar,
Although “gelding’s” been known to occur.
Still, we hope that you won’t swear or holler,
Cause those penalties get more severe.
[And be very, very sure you’re not queer!]

Well, “To hell” as they say, “With our worries!”
After all, you just haven’t a clue,
That YOUR vote could change your “government” life,
For to be pampered and worshipped’s your due!
Drink that Kool-Aid; live with Mom;
Watch that “aid” roll on in
“Julia’s life” is the best to be found!
Then prepare, really fast, to switch sides on the fly,
Cause’ Shari’a will take us all down,
And there’s no place that they’ll let us hide.

The Framers of the Constitution knew that free speech is the friend of change and revolution. But they also knew that it is always the deadliest enemy of tyranny.
Hugo Black

Couldn’t have said it any better……

Why give this nincompoop the publicity and platform that she wanted by talking about her?

Fortunately for her, my opinion of teachers can’t sink any lower than it already was.

“In any war between the Civilized Man and the Savage, Support the Civiled [sic] Man. Support Israel. Defeat Jihad.”

For the life of me, I see no “hate” in that message.

There ARE savage jihadists.

Denying that is a species of insanity.

Ah, but it’s speech from people they hate and it makes them hate! Thus, hate speech!

From earlier today:
“AFP’s video provides a mark for all those seeking to market political ideas effectively. Concentrate on the emotion, do your marketing research, and the facts fall into place.”

Well, here’s a golden opportunity: Define the very savages these petty tyrants are so adamant to defend, and define them in a manner no one can mistake.

How? By using their own words:

But wait! They’ve already decried that interview, claiming it was under coercion. Well, Israel freed this particular savage during their prisoner exchange. And guess where she is now, still gloating merrily? Let them say again that she was coerced, and then answer them with her own words, again, the ones spoken now that she is a television celebrity:

[Quran Sura 9:5] Once the Sacred Months are past, (and they [referring to any non-Muslim] refuse to make peace) you may kill the idol worshipers when you encounter them, punish them, and resist every move they make. If they repent and observe the Contact Prayers (Salat) and give the obligatory charity (Zakat), you shall let them go. GOD is Forgiver, Most Merciful.

Did you get that, “You Muslims are authorized by me Allah to KILL anyone who won’t accept Islam.”

[Quran Sura 9:29] You shall fight back against those who do not believe in Allah [the Quran’s description of all non-Muslims], nor in the Last Day, nor do they prohibit what Allah and His messenger have prohibited [such as having the shocking existence of a First Amendment], nor do they abide by the religion of truth [how Muslims describe Islam] among those who received the scripture, until they pay the due tax, willingly or unwillingly.

So, in the eyes and reasoning of Muslims, if you dare resist Muslim insistence that you accept Islam by the use of self-defense, that is considered aggression against Muslims thereby authorizing Muslims to make aggressive jihad upon you.

It’s not “hate speech”, it’s “speech I hate.” In their childish minds, there is no distinction.

This is hate speech: http://avalon.law.yale.edu/20th_century/hamas.asp

and, the unexpurgated version is worse: http://middleeast.about.com/od/palestinepalestinians/a/me080106b.htm

People who adhere to those documents are savages, and they claim to be acting in the service of Allah. They also claim the right to kill other Muslims.

Don’t you seem to understand that to Liberal’s..their mantra is:

“Free Speech for me, but not for thee”

“They prefer a sort of “might makes right” argument instead, and apparently the Constitution doesn’t apply when they’re in disagreement with the free speech.”

Government and society, like a fish, rots from the head down.

Aren’t democracies wonderful? It’s amazing how well a tyranny by a majority mimics a tyranny by a minority. Fortunately, we live in a constitutional republic, which is designed to preserve the rights of individuals. Even, apparently, those who would take away those rights.

That said, after more than one thousand years, Jews have ended the Muslim occupation of Israel. This should be a gay (a word that was occupied less than 60 years ago and remains captured today) time for one and all. Why is everyone unhappy?

Yesterday, Israel was liberated. Tomorrow, the English language will be restored to its original purpose.

On general principle, one should never side with Islam. It is antithetical to the very foundation of Western civilization. To support Islam on anything is to support one’s own destruction.Today, Polhemus freely sides with Islam; tomorrow, if Islam dominates in the U.S., as Muslims have said they have come to do, she will have no recourse but to accept Islam, pay a tax, or die.