Our backs are against the wall

Our backs are against the wall

And that’s probably a good thing.

I’ve been riding around in my pick up truck for weeks with a camera on the seat hoping to spot a bumper sticker worthy of the LI series. Nothing even close.

Then I remembered the back of my own truck. 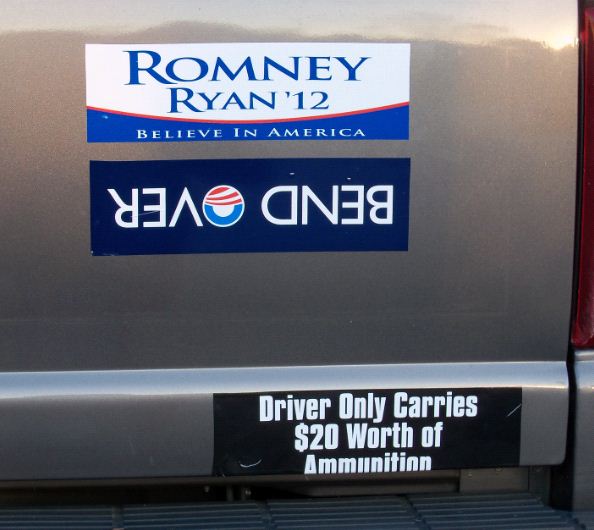 I love the ammo sticker!

I’m thinking of getting this for hubby as a Christmas present. It would go well in his shop.

My first thought was breaking the rules with your own truck but I do like the ammo sticker.

Yeah, I wasn’t sure so I made certain to ID it as my own truck. Here in rural east NC I’m still not seeing many presidential campaign bumper stickers or yard signs. Plenty of local ones – county commissioner, state house, town council. Got lots of purty pictures of other stuff though.

Henry, I LOVE that set of bumper stickers! Attaching “Bend Over” upside down is pure genius. I like your snark! hahaha

Too long for a bumper sticker but just right for a Tweet:

Mitt Romney has the power to unseal all Obama Records once in office. heh-heh-heh

My Left-of-Lenin college professor sibling called me yesterday, absolutely scandalized. It seems that some hateful, mean, unreconstructed, knuckle-dragging, neck-bearded, mouth-breathing, Romney supporter in her very purple neighborhood in Houston, stole her Obama/Biden sign. It was GONE, she said. Like an alien abduction type of gone. What next, she implied, voter suppression? A repeal of the 14th Amendment? A Bubba Revolt? Rick Perry closing all Whole Foods stores and banning hybrids and electrics?

About eight last night, my brother-in-law called to tell me that after his last job of the day, the yard man came by and retrieved the Obama/Biden sign from behind the hedge, where he’d placed it. Since the yard man uses a wide-deck, stand-up mower, he will sometimes move things like…yard signs.

On his way home, he suddenly remembered not returning Senora Professora’s sign to its spot in the yard. Of course, the yard man being a Romney supporter probably has my dear, dear sister mired in that deep inner conflict, so endemic to Lefties. I mean, what Obama Zombie would drive 10-miles out of his way to replace a moved and forgotten Romney sign? Well, I’d answer that when you build a business on your own, it changes your perspective. 😆

Ha! She must be inside either the beltway/Spring Branch area or inner-/Memorial area, loops. Starting at the beltway it starts to turn slight purple there, further in is no-man’s land. If she lives in the Heights or Montrose areas, I feel your pain. Tell her a deer must have wondered too far inland, and then send her that famous video of the deer tearing up the Obama sign in Austin. 🙂

Great story! You be sure and tell Sis to go by Twitchy and follow the threads about Romney bumper stickers and signs getting keyed and otherwise vandalized and trashed.

Say, by some chance, was this yardman of Mexican or other Latino heritage?

Great signage! (Even if it’s your own truck.) 😀

Hope you’ve got good insurance coverage on that truck, Henry – it wouldn’t surprise me in the least if some Kool-Aid-drinking loon set fire to it. Just sayin’ ….

That was a concern. Not much risk here and about Nashville NC (aka ‘Little Nashville’ or ‘The Other Nashville’). It’ll be a risk when I go to Raleigh and especially when I visit my daughter in Chapel Hill (aka ‘Chapistan’ or ‘Moscow On The Eno’) where she attends University of North Carolina.

You’ve got one too? Fun, aren’t they?

Sadly, $20 worth of ammo isn’t much, these days. That’s why you need gun control.

We carry and we know $20 worth of ‘sociable’ .45 ACP will take care of multiple bad guys. “They wont even want to come out of their caves.”

“Does BO Merit Our Respect?”

He speaks kind words, so “fair of face”,
But underneath there lies disgrace–
Respect is NEVER owed to SIN,
Nor to a traitor born within,
A “home” where hatred ruled supreme,
Who now “acts out” his bitter scheme,
The destruction of our American dream.

“Respect cannot be learned, purchased or acquired – it can only be earned” (Anon.)

“Men are respectable only as they respect” Ralph Waldo Emerson

Barry Soetoro, WHO WOULD NOT RESPECT OUR VERY FLAG [source above, 4 different venues; over two years), is owed no respect by any of us. FORTUNATELY, HE WILL SOON BE OUSTED. AND RESPECT OF OUR LEADERS CAN SPRING ANEW.

I had to laugh on my trip into Asheville yesterday. Last election year about four miles passed the Madison/Buncombe county I’d start to run into Obama signs. This trip there were no Obama signs but it seemed every road junction from the center of Leicester to the Asheville city limits sported a Fire Obama sign. I also saw Fire Obama signs in Asheville itself, mostly in an industrial area near the river and in front of a couple of small businesses.