Obama will travel to Chicago to vote early

Obama will travel to Chicago to vote early

President Obama has announced he will travel back to his adopted hometown of Chicago to vote early on October 25. This will be the first time a presidential candidate has not voted in person on Election Day. Michelle Obama voted absentee a few days ago.

Michelle Obama has referred to early voting as the Obama campaign’s “secret weapon,” and it certainly has been in the past. In 2008, 30 percent of all votes were cast via early voting–an increase of 10 percentage points from 2004, when 20 percent of ballots were cast in this way. early voting ballots favored Obama and it appears that 2012 will produce an early voting turnout that is even higher.

In a Talking Points Memo piece on early voting, George Mason Professor Michael McDonald estimated that the election will be won or lost before Election Day:

42 states allow early voting either by mail or in-person, while 33 of those allow it without an “excuse,” according to Ballotpedia: 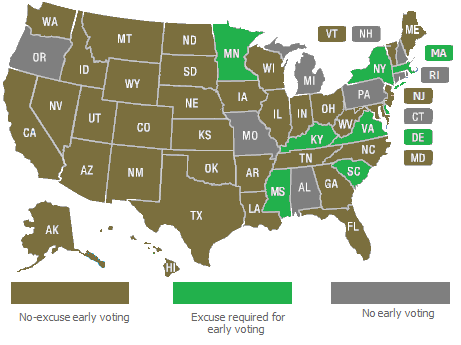 Democrats are fiercely attached to early voting; any attempts to question either its constitutionality or susceptibility to voter fraud are met with claims of racism and voter suppression. A decision earlier this month by the federal appeals court directed Ohio as to how they would run their elections, allowing for expanded in-person early voting that the Ohio secretary of state had removed. Ohio’s secretary of state has said he will appeal to the Supreme Court.

Which makes a LOT of sense, given the collapsing Obamic Regime.

A lot of early Obama voters will suffer “buyer’s remorse”.

The Left is evil.

Vote early and vote often: It’s a lot easier when you have weeks to do. No more speeding through school zones all over town while racing from precinct to precinct on election day.

The WaPo has a piece on Jesse Jackson Jr.
Be sure to read the section call “Building a power base”
http://www.washingtonpost.com/lifestyle/style/jesse-jackson-jr-political-candidate-and-focus-of-many-unanswered-questions/2012/10/15/9eba085e-1704-11e2-8792-cf5305eddf60_print.html

I mailed my ballot already. I registered absentee in CA a few years ago, tried to re-register as a voting day voter a year later, but they keep sending me absentee ballots.
Incidentally, we had pollsters call us last night at dinner time, and we didn’t pick up given how we have two little kids, and everyone was already sitting at the table.

I voted yesterday. As a small business owner, early voting is great for me since it guarantees I will get to cast a vote in person.

I wonder under which of his many names he’s registered to vote? He can’t practise law because he lied when asked if he has been know under another name.

Ms. Sorock touches on a point I have always believed: early voting (for President) is unconstitutional.

The Congress may determine the Time of choosing the Electors, and the Day on which they shall give their Votes; which Day shall be the same throughout the United States.

The Times, Places and Manner of holding Elections for Senators and Representatives, shall be prescribed in each State by the Legislature thereof; but the Congress may at any time by Law make or alter such Regulations, except
as to the Place of Choosing Senators.

This seems to offer great flexibility to the states as to the election of congressmen, as opposed to the President.

In Massachusetts, there is no early voting. Art. LXIV, sec. 3 (as amended) of its const.:

One election, one day. (A later constitutional amendment allowed for absentee voting for certain limited reasons.)

There have been several attempts to amend the constitution to include early voting, but they have all failed. (The main objection has been expense to localities.)

The point being, though I know of know court cases on the issue, everyone has always assumed a constitutional amendment is necessary, not just a law passed by the Assembly.

The states decide how the electors will be chosen. On the Monday after the second Wednesday in December, the electors vote. Sounds constitutional to me.

I don’t have a problem with early voting. It allows those of us who don’t work for someone else and thus have no “right” to take time off from work the opportunity to guarantee we will be able to vote. Some of us don’t have the luxury of closing up shop to stand a couple of hours in line to vote.

It’s Chicago. Why do you assume Obama will not vote in person on Election Day?