I spotted this today at the library in Carlsbad, CA. Not sure if you’ve posted this one. 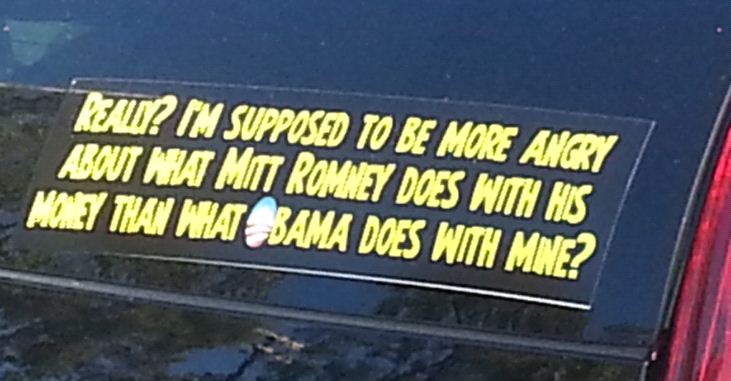 Someone brighter than me stated a few INCONVENIENT TRUTHS about BO BO’s economic and political disasters–I pass along with a couple of updates:

Well, These “records” cannot be sealed:

23 million unemployed
The middle class has lost 40% of its net worth under Obama
Black poverty at record highs
Black youth unemployment over 50%
Hispanic unemployment at 11%
Food prices up 15% under Obama
A record 45 million on food stamps
Gas prices doubled under Obama
42 months of unemployment above 8%
Obama has the worst job creation record since 1945 (BLS)
Obama recovery the worst in 75 years
Median household income $4,300 declines under Obama
Average family health insurance up $1,500 under Obama
Added $6 trillion to our debt…more than all Prezs. Combined
Presided over only US credit downgrades [two (2) so far]

If Obama’s plan worked how come so many are poor and out of work? We will also hold him accountable for your:
Lies
Smears
Cover ups
Creating more racial tension
Pandering
Ignoring the laws of the US
Fast & Furious
Deaths in Benghazi and elsewhere–where he refused to allow REQUESTED SECURITY SUPPORT
Treason to America in the Middle East
“MORE FLEXIBILITY” promise to Putin of Russia
Obama has both failed and defamed the Office of The President.
Vote him out in Nov.

Too bad Michelle Obama didn’t put her and her husband’s spending on a healthy diet. Much too bad.

All that Obama money and look just posted at RCP

One debate seems to have negated 100 million spent on negative tv ads attacking Romney.
Some investment there. Worked about as well as the stimulus

No, the Democrats want you to be angry that Romney has>/b> money.

Democrats berate Mitt because of his wealth. They don’t realize his background Before politics. He had to be well prepared, for years, to go ask investors for five or ten million dollars of Their money, so he and his firm could place it in companies they would nurture to make More money. Mitt Had to have the Sales ability AND the management ability to be as successful as he was. Obama has only won elections by nefarious means, or in the case of the Presidency, a complete coverup by a compliant media. Obama was exposed the other night, and it was not pretty.

There are noticeably more Romney signs/stickers than McCain in 2008 in Seattle, of all places. To me, it just doesn’t make sense that an electorate that rejected Obama and his agenda so resoundingly in 2010 is going to re-elect him in 2012. I’m predicting a solid win for Romney.

The Boy King was at ANOTHER Hollywood fund raiser last night where $25K was the per plate price to gaze upon the emptiest suit the White House has ever seen. It’s ALL money which I don’t begrudge them for even a millisecond. But, when–I got’sta know–did we Americans make success, achievement, production of money and(gasp)WEALTH as B*A*D??

And, His Infantile Majesty, loading every orifice with cash has declared war on those who produce it. Hep me, will ya…Please’O’Plleeeeaaaasssseeeeeee Hep Me Understand this Malignant Crap!!