Obama is Kool in Maine

Obama is Kool in Maine

More signs of the times

It is in the 2nd CD, where Romney might conceivably pick up one electoral college vote. 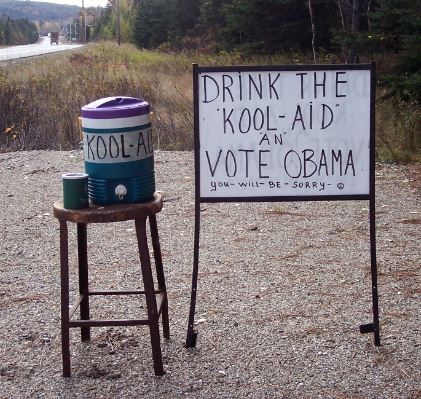 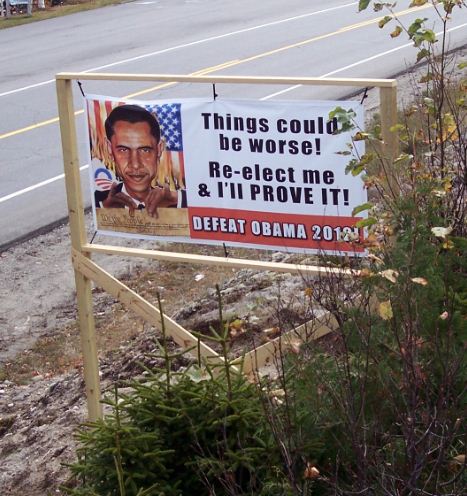 I loved the state motto emblazoned on a sign as you enter the state on the Appalachian Trail ( I thru hiked the AT in 1999 ).

“Maine, the way life should be.”

My friends think I am a broken record. I keep telling them

Ride right through them, they are demoralized as hell.

Still believe it will be a landslide win for Romney/Ryan

Tell them to stop being gluttons for punishment (by watching CNN, ABC, NBC, CBS, MSNBC et al, or reading the NY Times et al). Tell them they might as well tune in to old recordings of ‘Tokyo Rose’ all day.

Maine could be a surprise. Despite the high percentage of residents on the government dole it is also an internal combustion engine culture. You need a car to get anywhere. Snowmobiles rule in the winter. ATVs and outboard motors are commonplace. Most outdoor equipment is gasoline powered. Feeding all these engines creates many opportunities for Maine voters to reflect on how Obama’s solar powered vision of America is at odds with their way of life.

get away from portland/lewiston area and we’re not too bad.
high oil prices can literally kill us.
takes 20 min for any LEO response, so many of us are comfortable with weapons.
many of us grew up cutting wood for heat and know how to manage land.
many of us are just tired of the gov intrusions into every aspect of our life.

Interesting comment I saw on another blog:
“Headlines From Drudge
Obama DOES Have Investments In Cayman Islands Trust…
… and has a bigger pension than Romney!”

Thanks for passing along these photos from Maine.

“Drink the Kool-aid” is more poignant, I believe, than many perceive in view of the isolation, paranoia and ultimate mass murder and suicide inflicted on believers of the Jim Jones cult in the People’s Temple Jonestown tragedy in Guyana.

The predatory stare on the Obama image’s face is telling as well in the malice of the Health Care Mandate, the non feasance in Defense of Marriage Act shunning, the non prosecution of the New Black Panther Party polling place intimidation, the Fast and Furious and Benghazi stonewalling.

I won’t even start about money.

Jeffrey, I am with you on the election outcome!

who else here from Maine?
Etna here.