From friend of the blog Sara:

Here’s a photo of a lone Obama supporter I took this morning, presumably trying out her Halloween Costume a few days early.

This photo was taken in Boca Raton, Florida. 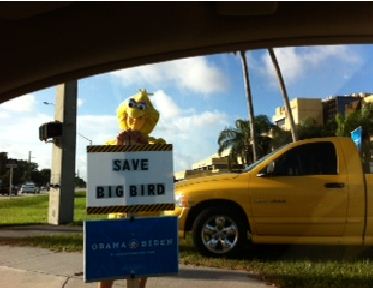 The woman who founded the Children’s Television Workshop, which created Sesame Street, is a maxed-out contributor to the Obama campaign and a significant donor to the Obama-backing Priorities USA Super PAC, campaign finance records show.

Joan Ganz Cooney contributed the the maximum $35,800 to the Obama campaign and Democratic National Committee, plus an additional $30,400 that could be distributed by the “Obama Victory Fund” to state parties. She then gave $50,000 to the Priorities USA Super PAC that is backing Obama’s re-election.

According to the latest Internal Revenue Service Form 990 financial disclosure that Sesame Workshop has made public, its total revenue for 2009 was about $130 million. Of that, about $7.9 million came directly from government grants.

Big Bird gets program fees from stations, too. Sesame Workshop lists $27 million in content distribution revenue. Some of that comes from federal dollars funneled to local PBS entities, though the Form 990 doesn’t break that out.

Uber-1%-ers: Sesame Workshop president and CEO Gary Knell got $684,144 in reportable compensation from his job. Tax returns from PBS’s Sesame Workshop show that the television show shelled out at least $314,072 for the actor behind Big Bird and Oscar the Grouch.

Another reason to go to Chick-fil-a, they serve up big yellow birds for dinner in the most delicious way. 😉 Eat Mor Chikin!

Color me politically incorrect as I had huge fried chicken sandwich for lunch and will dine on a giant helping of roast turkey tomorrow evening.

How sweet it is…

Thing is…B. Bird is under no threat whatsoever.

The Bird is richer than Romney, and will be with us regardless of a cut in pBS funding…

as Pres. Bumps knows very well. It is just another lie to divert from a totally failed regime.

Surely somebody has photoshopped Obama’s face into a Big Bird outfit.

“[T]he actor behind Big Bird and Oscar the Grouch” should be ecstatic about getting at least $314,072, and royally pissed that Elizabeth Warren got more money for less work.

Guess the Sesame Street actor will get a raise when they add a Native American character to Sesame Street. [Probably along with an indian chief, a sailor, a construction worker, a cop, a cowboy guy in leather chaps, and an, ahem, “leather aficionado”].

Hell, the actors in Avenue Q only made $1,500+ per week and they had to travel around and probably did not have government benefits! And they were way funnier, more entertainings, and more informative than the schmuck who plays Big Bird/Oscar the Grouch.

Why doesn’t Occupy Wall Street go after these Sesame Street folks? A RICO claim would be nice, too.

Count von Count should be hauled before Congress to give the kids a real counting lesson when he counts his annual salary, in one dollar bills, in front of Represenative Issa’s Government Oversight committee.

And the less said about Bert and Ernie, the better. Talk about Double Income No Kids (DINKs)! Wonder if Warren’s Two Income Trap covers those guys.

I want to see the RNC join forces with Chick-Fil-A and produce an ad/commercial showing that sweet employee, Rachel, serving Big Bird at the take out window.

I don’t mean Big Bird is in the car picking up his food.

It’s that same obnoxious videotaping jerk in the car.

But this time Rachel is passing him a basket of fried Big Bird to go with his free, subversive cup of water.

Homer tries to anonymously pledge $10,000 to PBS to end the pledge break and get his favorite program back on the air. When PBS comes collecting, he goes on the run.

Betty White: Folks, we’ve just reached our goal of ten thousand, seven hundred dollars, and it’s all thanks to one generous caller … who didn’t leave his name.
Homer: [laughs]
Betty White: But thanks to Insta-Trace, we’ve learned it’s Homer Simpson of 742 Evergreen Terrace. [a picture of Homer appears on the screen]
Homer: [screams] Oh, why did I register with Insta-Trace?

You can’t leave Homer home alone for a second …
Lisa: Mom, Dad’s on PBS!
Marge: Hmm? They don’t show police chases, do they?
Homer: (fumbling for the right words) Um, it’s an honor to give $10,000. Especially now, when the rich mosaic of cable programming has made public television so very, very unnecessary.
the crowd claps
Marge: (knowingly) From now on, one of us always stays home.
Lisa: Agreed.

But, that’s just because Ambassador Stevens’s slaying was just a “bump in the road” and his security is not worth funding in half (one-third?) the amount of the salary of the head of Sesame Street.

DeMint, a Republican from South Carolina, responded with a blog post and an op-ed in the Washington Times in which he argued that Sesame Street would do just fine without federal funding.

“Shows like Sesame Street are thriving, multimillion-dollar enterprises,” DeMint wrote. “According to the 990 tax form all nonprofits are required to file, Sesame Workshop President and CEO Gary Knell received $956,513 — nearly a million dollars — in compensation in 2008. And, from 2003 to 2006, Sesame Street made more than $211 million from toy and consumer product sales. Big Bird will be just fine without his federal subsidies.”

These liberals have no shame. None. And, we are their serfs.

I wonder how many liberals want Obama would debate in a Big Bird costume. No. Wait… don’t we all? Picture that mental image 😉

Romney had the best line (if he said it; I only saw in some headline that he had): “I don’t care about Big Bird. I care about the American people.”

Need to go on record about Big Bird.

When I was an art director with a now defunct toy and gaming company, one of my job was to help my company scout for licensing agreements with popular children media brands. We were never able to secure a meeting with the Big Wigs at Sesame street because we unable to compete against their other Big Licensees (e.g., Hasbro, Nintendo, etc).

Trust me when I say this, Big Bird has a really, really Big Bank Account. Sesame Street is more like K Street than Main Street.

So, do you think Big Bird tastes like chicken?