Or as we could characterize it,

Hope is not a strategy. 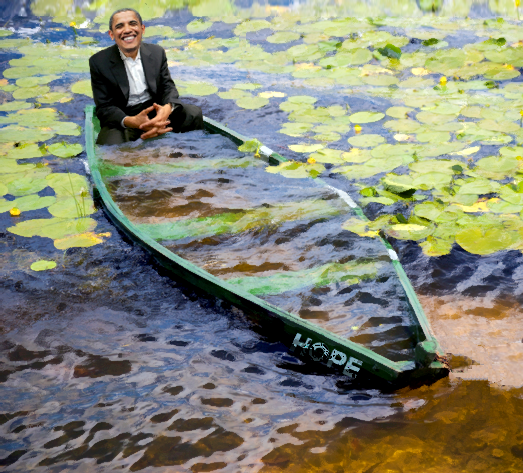 Yesterday I saw an Obama/Biden sign with the word “HOPE” under their names. Any sentient human being, looking at that sign, would have thought “Hope is all they have.”

Hope they go away…

In this case HOPE doesn’t Float.

The man who gave us the platform of Hope & Change, sans details other than more platitudes, now derides his challenger for not having specific details of a tax reform plan.

And where the sitting president was specific with details, they turned out to be lies or the stuff of rainbows and unicorns.

I, too, hope Obama/Biden GO AWAY and stay away … FOREVER!

I don’t remember how I first arrived here but I’ve been a regular visitor since about 2 weeks after this blog started. That was about four years ago.

The pic would be perfect if it had a “killer rabbit” swimming next to the boat….

That picture would be even better if the boat was at the bottom of the lake or whatever that pond is. Perhaps that would wipe that smile off his face. We would see then if mr. wonderful could walk on water.

That smile. That smarmy msile. How anyone could have been taken in by this charlaton is beyond me. I hope with all my heart that he loses and moves to Hawaii to his $35 million estate and never comes back to the mainland again. I realize that is a futile hope. We will be saddled with this guy and his wife for the rest of their lives,,,win or lose. Just like we are saddled with the Clintons 12 years after he left the presidency by inspecting the guards while the inaugaration was still going on with full media split screen coverage.

A few circling GOP sharks might have added a nice touch.

But alas… It is yet another example of discontent in the nation.

Hope plus a little pond scum/algae should get us right through four more years of 1.) no fixes for the Economy and 2.) the War on “non-Terror” whose defense we can subcontract to the “Moderates” who “Love Me I’m Not George Bush.”

Oh that’s just brilliant! Mind if I share a bit? Have you donated this to the Romney campaign?

The media and Democrats (but, I repeat myself) are desperate to keep the race close at least in appearance. Obama’s constituencies among minorities, young people, and the generally slow of wit are very easily discouraged, and a low turnout from any of them means he has no chance at all.

But I believe the first debate constituted the turning of a preference cascade. It showed Romney is no monster who wants to eat the poor and close all the factories.

Given the complete and utter failure of Obama’s term, that’s all people really needed to switch.