Now about all those media memes about how the election was over.

Do you trust the liberal media?

Or will you believe your eyes and what you know because you don’t live in the media bubble: 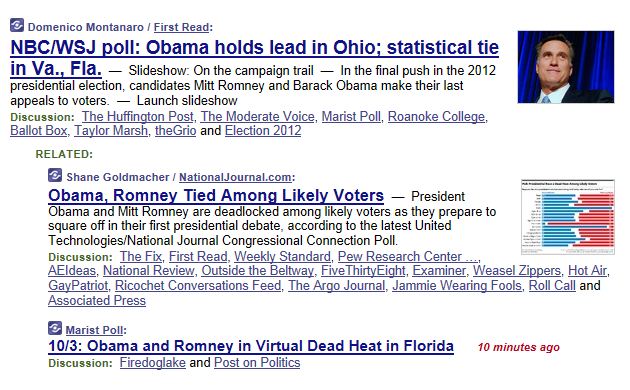 Like I said, Finish hard, and fight through the finish line.

Mitt,’Yo: The Boy King doesn’t like you, Sir. USE it. EXPLOIT it. KNOCK the Punk off his Game by making him huff & puff and toss his faux superiority at’cha.

Use a nicely mailed Fist. Quote his lies. Quote his pledges and promises. Tell him that blaming the former president for the nearly 4-year catastrophe of the Obama Economy is cheap & cowardly. REMIND the folks what the growth rate(% of GDP)was in 2007 and is now.

Here is my pre, during and post debate prescription!

Where oh where did my little Teleprompter go?

Ho there Obama – you’re not the same man you never were before.

Guess all those college grades of “P” don’t count in the real world.

Do we trust liberal media???? Oh Hell No

Interesting piece by Republican pollster John McLaughlin predicting “Why Mitt Romney Won’t Win the Post Debate Swing State Polls” Media will be working overtime to make sure Obama is declared the winner of the debate. I am pretty sure we all knew this already but it doesn’t hurt to be reminded.

But remember it is really the LEFTIST MEDIA!

Leftist Media – because “liberal” means kind and generous – two things the American Lamestream Media is not at all.

So please use Leftist Media.

Prof, I trust the MSM about as much as I could toss Micheal Moore a dozen yards!

Now that I’ve sprained my thinker just imagining *that* I guess that your point is just to return to the reality of the status of this race.

I’m stickin’ with that U. Colorado group that is forecasting a nearly 10% Romney plurality in November…

Wonder how many media outlets have stories already prepared, waiting for the final numbers, to the point conservatives control the Secretary of State elections offices in most of states and thus were able to pull off a massive fraud/conspiracy that deprived Teh Won of his rightful place in history? Or variants thereof? Can we run a poll? I pick SEVEN.

Absolutely right! And don’t forget that you can more than triple your money by buying “Romney wins” shares on intrade:

Do it NOW!!! The share price has been moving up steadily since this morning! After tonight’s debate knockout by Mitt, the price is sure to skyrocket!

As a public service, Prof., we need to set up a “Operation Get Over It” suicide counseling outfit to help the Collective deal with Obama’s loss in a few weeks.

Rags, we should be careful about this. Isn’t assisting suicide illegal in most states?

Mitt can get him mad if he can work in, in his own words, that Mr Biden finally confirmed to the country what the Administration meant by “shovel ready job” as they did such a fine job burying the middle class…

BTW does anybody remember when the ‘middle class ‘ was responsible for everything that is bad in the universe?

I am watching the repeat of a football game tonight. At least there the hits will be half-way honest.

They are deskewing the polls so afterwards they can reskew when to show obama won. The only poll that matters is in Nov

In a first of three debate, I expect Romney to take the make-no-mistakes route, not at all to be confused with defensiveness. Given he’s had over 40 hours of on-air debate experience from the primaries, he’s tuned up and ready to go. He’ll endeavor to give concise encapsulations of his points and to stay within the time limits, and wherever possible, he’ll try to talk past his two debate opponents and directly to the American people.

Obama, I hope, enters the debate cocky and arrogant, despite a heavy record of screwing up whenever off script and off prompter. I expect he’ll have the usual uhhhhs and sputtering, then to move on to his usual meandering superficial rhetoric, and will struggle mightily to hold himself to time limits. True, Obama has no record to run or speak on, but he also has four years experience talking all around that fact.

Lehrer has the easiest pathway to winning this debate, in that he can count on Obama to serve as a secret ally while he and Obama set each other up to defeat Romney. As the time keeper as well as a debate participant, Lehrer can give Obama extra time and let him finish turns cleanly while cutting Romney off, speaking over him the instant his time is up, thereby muddying his efforts. Lehrer also holds carte blanche as to question selection, a power that really gives him a leg up.

In the final examination, for a first debate, I expect a basic wash between Romney and Obama, each given the slight edge by their respective partisan supporters. The big winner of tonight’s debate will be Jim Lehrer, for the following reasons:

Very impressive analysis Hawk. Under the present circumstances of Obama’s “meltdown”, I find the calm and reasoned approach of Gov. Romney reassuring. Other potential nominees “so full of fight” would lose the superiority which comes from quiet strength. Firm and decisive attacks, without histrionics or drama, are to be encouraged.

IN OTHER VENUES, IN OTHER MEDIA, HIT HARDER, NO MERCY

ROMNEY & RYAN WIN BIG IN JUST ABOUT A MONTH

During the Primaries, Romney was the MSM’s fair-haired boy. He got all the talk-time, was allowed to get away with untruths, and was treated him as the nominee-in-fact. Romney’s opponents scrambled for time to speak and were made to look petty and vindictive when their truths contradicted Romney’s prevarications.

Tonight, Obama will be treated as Romney was during the primaries; Romney, like his demonized opponents.

Romney will be expecting nice treatment, at least viscerally. He’ll have to adjust to being the villain. I’m not sure he can handle it.

Everyone is hoping for an Obama meltdown. False hope; everything is too well-rigged for that to happen.

Romney is the one who might melt down. He came Santorum landed started landing sharp hits about Romneycare. And that was with a friendly media.

I’ll have my crow plain. No sauce, no stuffing.

Interesting here in Michigan???? WLNS TV6 in mid-Michigan did a poll today. The question was if the presidential election were held today – who would you vote for?

Results as of 6pm tonight.

Are we seeing a worm turn here in Michigan??? But it does make you wonder about the bias in the polls. Yahoo suspended their political polls on their front page over a month ago when all of the polls favored conservative views. They are back up running again and guess what? The polls are trending heavily conservative again. And Yahoo is about as liberal as it gets. So I am not putting any weight behind any polls except for Rasmussen.

The only polling discussion I read is Battlegroundwatch.