Seeing Andrew again on screen was a reminder of just how irreplaceable he is. Already I was starting to forget just how intelligent he was, how courageous, how humble, how entertaining, and how he “soaked up the hate” of the left so that others would feel less.

The movie is a primer on Andrew Breitbart’s mission; director Andrew Marcus weaves a portrait of Andrew the man along with Breitbart’s great insight into the American landscape: that the war is with, above all, the Media, and their cover for the institutional Left.

As one person interviewed in the movie says, Andrew was born at the unique time where his insight was needed. Just as Fred Astaire’s tap-dancing may not have been appreciated in today’s musical scene, had Andrew Breitbart been born in another age his genius at understanding and fighting back against the Left may not have been so needed. But we did need him, and we need to watch this movie for its beautiful telling of the framework for our fight.

Hating Breitbart uses three of Andrew’s most revealing news stories to demonstrate how the Media manipulates, and in Andrew’s words, has complete contempt for, the American people: ACORN, Shirley Sherrod’s racist speech to the NAACP, and the accusations of Black congressman that Tea Party activists shouted racial epithets at them as they entered Congress.

I was very familiar with these stories going in. The retelling is done in such a way that it becomes new; I learned just how much hate Andrew “soaked up” along the way, and how he was leaving a trail for us to follow as we take on the same battle.

Andrew says in the movie that he has only two emotions, two speeds: jocularity and righteous indignation. It is those two emotions that run throughout Hating Breitbart. The anger at how the Media demonstrates their contempt (one particularly disgusting episode with an editor of Mediaite is worth watching the whole movie for) is lightened by simply observing “the happy warrior” on the screen. As one person who watched the movie with me said at the end, “I just didn’t want it to end. I didn’t want to stop watching Andrew.”

While I urge you to make the greatest efforts to watch the movie (showtimes here), if you are unable, you can help support Breitbart’s mission by supporting his family. Donate to the Breitbart Children’s Trust here. 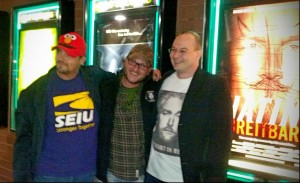 The film is playing in Burbank and I’m going today. I didn’t care for the trailer. I hope the movie shows the complex and decent man Andrew was, not just all-bombast, all the time. Andrews strength came out of his deep well of decency.

“Andrews strength came out of his deep well of decency.”

Good to read your review, and comments on others’ reactions.

He is truly an irreplaceable “happy warrior” who, thankfully, inspired many to take up his cause.

I can’t help but think that Fauxahontas would be toast if Andrew were alive. Man, he would he have loved taking her & her clown posse down!

Great piece. Glad you included the donation link for those who can’t attend. That said my wife and I are going to Burbank tonight. #war

One of the HuffPo trolls attending the opening had a meltdown and was forcibly removed from the theater.

Ryan Clayton (twitter handle @100ProofPolitic), one of the Moonbats appearing in the film, performed a demented head-detonation act in front of the audience.

Wish I could have personally videoed his drama for posterity. 😉

more on that later

I need to watch this. I just don’t know if I’ll leave with dry eyes. I’ve missed him since he died.