The countdown continues with 9 days to go.

Today’s great Empty Chair photo comes to us from Yvonne and Glen in New York. 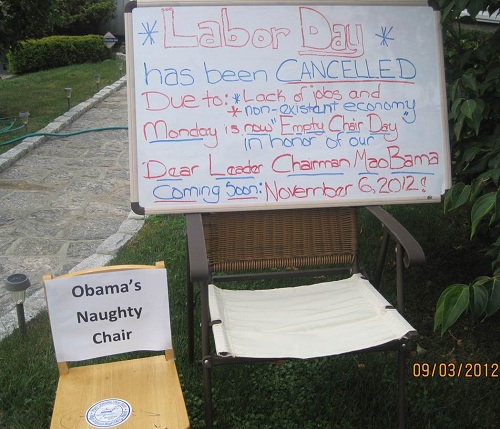 The “naughty chair” is a nice touch, isn’t it?

Totally off topic: With Frankenstorm Sandy bearing down on our East Coast, realize that never in the history of our country have we postponed national elections due to war, 1812, 1864, 1944, nor due to national disaster or major crisis.

So, when our highly vaunted media (Ha, I was only kidding, regarding that highly vaunted part!) starts to suggest that our November 6th election might be delayed, there’s something rotten in the air and possibly in our government.

The conditions under which the national election of 1864 were held might have been the most trying of any such election, with that of 1944 perhaps the next most critical time, yet our country voted and went onward from there.

1. Who can make such a decision?
2. Remember, by election day the storm ought to have passed, though there will be plenty of clean-up.
3. If you continue to put alarming ideas in our minds, we’re going to send you to the “naughty chair”!

Fair enough! However, due caution is necessary at all times, especially in times of extreme Frankenstorms.

We need to hammer the critical issues:

And how scary Elizabeth Warren really is.

What the heck is this? Is Andrew Sullivan posting poetry for Obama?

I’m surprised he doesn’t text him a nude photo.

We need to give Obama a time out on Nov. 6th.

I know no more pictures can be sent in, but this empty chair looking out at Hurricane Sandy in the Outer Banks needs the caption:

“This was the moment when the rise of the oceans began to slow….”