The countdown continues with 28 days to go.

Today’s symbolic Empty Chair photo comes to us from Rachel in New York who writes, “Broken, Spineless, No BACKBONE at all!.” 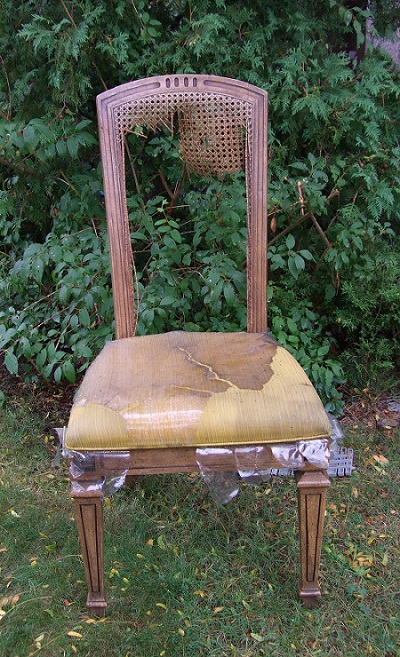 Can’t argue with that.

That chair looks to be analogous as to what’s happened to this country at the hands of the Obamamatrons for the last four years … or, as my Texican friends would have it — been rode hard and put up wet.

The tape is a nice touch!

This is a great thread for someone like me who has a thing for chairs & windows.

This one should be restored – it is quite beautiful.

It was “kinda unexpected”
To pay $5 bucks at the pump,
And you could not give me 50,
To excuse this latest “jump”
But, of course, the price of “energy”
To Obama does not matter,
So we know there’s no inflation,
Nor any limit he won’t shatter.

It was “kinda unexpected”
To see our countrymen defiled
In that “friendly place” called Libya
While the natives burned AND smiled.
But then, “The Won” said clearly,
That Islam was THE FUTURE TO BE
So we can only blame ourselves,
For the horrors at Benghazi.

It was “kinda unexpected”
To see BO wilt before our eyes,
Before the “verbal swords” were crossed,
He was TALKING TRASH and LIES.
But, of course, it took just minutes,
For the “Presstitutes” to find,
That Romney was falsely favored
By a rather brilliant mind.

We refuse more “unexpecteds”
We reject “more of the same”.
And we sure as h#ll aren’t willing
To yield our freedoms in “his” name.
So, the White House “Current Occupants”
Had better start to pack.
‘Cause we’re voting in “New Management”
AND WE NEVER WILL LOOK BACK.

* My local Chevron and 91 Octane;
[And you can stuff your “excuses” in your teleprompter.]
ROMNEY & RYAN WIN BIG….IN LESS THAN ONE MONTH

THE TIPPING POINT AND THE POINT OF NO RETURN WERE PASSED WEEKS AGO–WE JUST HAVE TO ADD UP THE VOTES (And yes, even the illegal ones won’t be enough to prevent “new expectations” with Romney & Ryan.

I created an account here so I could tell you – GOOD JOB.

It just had to be said.

That chair has been very bad ! It needs a good caneing.

I have a “porcelain” monument (you COULD call it a chair) to the O’Bama Presidency. It has a “reset” lever, that visually demonstrates how the regime is handling YOUR future…….