The countdown continues with 25 days to go.

Today’s Empty Chair photo comes to us from an LI reader in Switzerland who writes, “Thought this might amuse you . . . . Spotted this afternoon just south of Zurich, Switzerland” 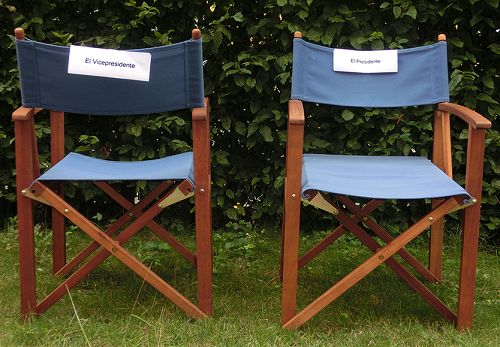 From The International Evening Edition of Legal Insurrection. That’s beautiful!

During a short manic spike of happiness I’ve been enjoying during a rut of depression, I thought I’d have a little fun with my remaining lefty schoolmate Facebook friends. They hadn’t seen much of me in months, and suddenly I’ve been taking the piss out of their liberalism, trying, lightheartedly, to demoralize them as much as possible after the Dems’ debate debacles with a flurry of posts.

I got a private message from a guy I’ve been acquainted with since I was a little (exceptionally sweet and adorable) kid in school. He said my posts were insulting and beyond the pale and showed me to be a typical, mean-spirited Republican. He said he’d be deleting me as a FB friend.

I quickly responded by saying I was so sorry and wanted to apologize for him having to see my posts and I could only blame myself for the oversight … because I was so sure that I’d deleted him as a Facebook friend a long time ago. (I made that up just to piss him off even more.)

“Don’t worry. When I delete you this time, I’ll make sure it goes through before walking away from the computer!”

They fancy themselves as being funny, hip cats … but they are the most serious, self-important, humorless drags. Nothing worse than a person who takes himself so seriously.

LukeHandCool (who is now enjoying the lonely freedom that comes with having no friends).

I know what you mean – kind of. I don’t really do the facebook thing.

But I have delved into political discussions via email with a high school buddy that turned out to be a moonbat.

You know what? It’s like a lesser form of Islamic blasphemy intimidation.

We have to tip toe around and be careful not to insult the prophet Mohammed, lest they fly into a rage and set the world on fire. We internalize that to some degree.

The left is the same way. They have it set up so, in polite circles or at a dinner party (don’t ask me how I know this since I never attend dinner parties) one can take pot shots at easy Democratic designated and approved targets that supposedly any fair-minded person would agree should be maligned (like Rush Limbaugh) and that’s still counted as polite, respectful behavior.

But if you balk at that, as sure as calling Mohammad a false prophet lights a fuse in the Middle East, lefties will have you know that the consequences will be very, very, ugly for you.

I’m through with that. They can give me their opinions and it doesn’t bother me, it doesn’t threaten my confidence, I don’t become angry … even if those opinions are diametrically opposed to mine, as long as they do it in a civil manner.

But, they’ve let it be known, that if you so much as think Rush Limbaugh has a good point on something … well then all hell is going to rain down on you, so to speak.

If not accepting those rules makes me look like an extremist in their eyes, so be it. I couldn’t care less because it means they aren’t worth a minute of my time, even if I grew up with them and have known them for years.

It’s sad and pathetic in a childish way. But it ain’t my fault. I’ll listen to anything anybody wants to say, as long as they do it in a civil manner.

But they can’t win under those rules. So they refuse and go on with their kooky Kabuki theater.

But I enjoy provoking them (with common sense and the meaning of life, libery & the pursuit of happiness).

It’s actually a lot of fun. They freak out and get extremely angry and even curse your mother.

These moonbats will be defeated on Nov 6.

Oh, I love provoking them, too. Because they really, really need it. I give it to them as a form of tough love.

And, as long as it’s kept lighthearted (and it’s not hard to make your points both informative and simultaneously lightheartedly entertaining) I can go at it with them all day long.

And if they get in a good one at me, my life won’t come crashing down … I’ll acknowledge it with a laugh and something along the lines of “Hey hey, touche!.”

That’s only theoretical at this point. They’ve never been able to lay a glove on me … they plod … and then they open themselves up to counterpunching when they swing wildly in frustration.

Yes, Europeans knew about this administration before the 53% votes put him in the WH.
I regret I didn’t get my empty chair photo entered in time.
It is an empty invalid potty chair, probably like the elderly VP has to use.