Burn me once, shame on you

Burn me once, shame on you

Some timeless advice from commenter vonbeck2, taken in Mandeville, LA:

As I am always on the look-out for something out of the norm I spotted this and was lucky enough to be able to snap a pick at a red light.

I think this is excellent advice. Failure to follow will result in burns! 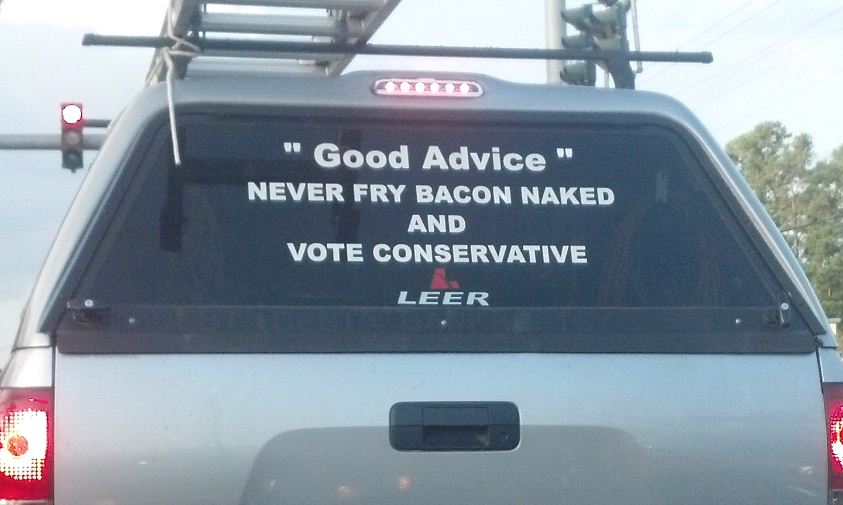 Of course, frying bacon naked is not kosher. It would make me yell “what’s the spatter with you!”

But its okay to vote liberal while frying bacon naked?????

I’m sure I speak for the Obama campaign when I encourage all his supporters to come to the polls Election Day nude and carrying a skillet of frying bacon.

Is it okay to vote Conservative while frying bacon with clothes on?

Speaking of burns; for anyone who’s upset or concerned at the degree of examination that Ms. Warren has experienced and thinks it’s picayune or punctilious, Democrats started this sort of thing a while ago.

By their dredging up of so much as a slip of the tongue or of property NEARBY some heinous painting on a rock, they have invited forced Republicans to play the same game.

Unfortunately for them, Democrats have a greater proclivity and proven past history of not being very mindful of false statements, failure to file appropriate documents or license applications with the Federal and State governments and espousing inflammatory action and spouting fiery rhetoric for their supporter’s consumption.

Tit for tat as they say. Or to paraphrase Jeremiah Wright; Democrats “chickens…are coming home to roost.”

Speaking of roosting chickens, I was looking at reader’s comments in reaction to Louis Farrakhan’s nasty, bigoted speech in Charlotte.

That prompted me to look up Louis Farrakhan to get an “integrated” look at his various controversies and Calypso background, birth, schooling, etc.

I went to Wikipedia and found this gem:

Following the assassination of President John F. Kennedy on November 22, 1963, Elijah Muhammad forbade his ministers from commenting on the incident. In a press interview, Malcolm X violated the directive and said President Kennedy’s murder was “chickens coming home to roost”. As punishment, Elijah Muhammad barred him from speaking to the press or at any Nation of Islam temple for ninety days. Malcolm complied. Another source of tension was Malcolm X’s discovery that a Chicago Tribune article claiming that Elijah Muhammad had fathered eight children by six teenaged girls was true.[20] In a meeting with Malcolm X, Muhammad justified his several children and young “wives” as his need to plant his seed in fertile soil.[17]

Malcolm X was assassinated on February 21, 1965 while preparing to deliver a speech at the Audubon Ballroom in Manhattan, New York City. The assassins were members of the Nation of Islam. The assassination was said to be in response to Malcolm X’s controversial popularity and insubordination to Elijah Muhammad. Alex Haley completed and published The Autobiography of Malcolm X later in 1965.

So, Reverend Wright’s “chickens coming home to roost” remark in the immediate aftermath of 9/11, was not just hate-filled venom from his mouth, but a repeated of What Malcolm X allegedly said about John F. Kennedy’s assassination.

Regardless of age, gender, race, ethnicity, sexual orientation, economic beliefs, politcal beliefs, religion, etc.: If you HATE this country so much, PLEASE leave!!!!!

Our country should start a program of buying out people’s citizenship. I propose $10,000 and a first class airline ticket to any place on the globe in exchange for an irrevocable and unconditional surrender of citizenship.

Too bad this person didn’t think this one through: It literally says: Don’t fry bacon naked and don’t vote conservative.

That’s how I understood it.

Reading it again, if “or” is substituted for “and” it would be a liberal’s bumper sticker.

I’m so burnt out of the election. I’m tired of the signs, bumper stickers, 24-hour news coverage, etc. etc. etc. I’ve pretty much tuned out and don’t even check LI as often as I used to. Mind you, when Romney wins, I’ll be celebrating right along with everyone else.