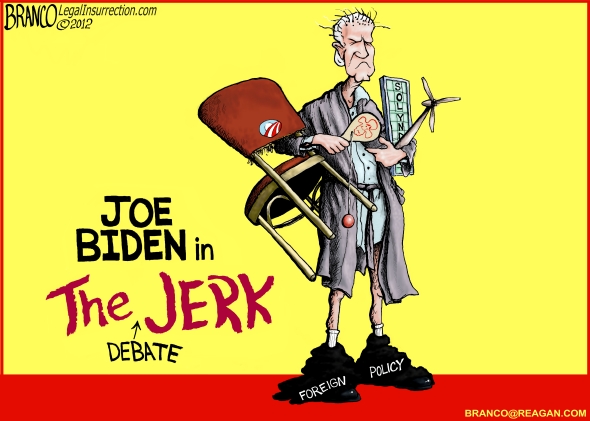 There has definitely been a shift in foreign policy.

LukeHandCool (who, when he was in his mid-twenties and he started to recede in the temple areas a little bit, desperately read everything there was to read, 10 times over, about hair transplants, and became quite the amateur expert. Such is the infinite power of vanity as a driving force)

Would have loved to have had this the morning after Joe Bidened the debate.

“My Story? I was raised a poor black child …”

Didn’t Obama recently claim just that? Or maybe it was Michelle’s speech, claiming how they were raised poor, but Obama went to the best schools, never poor.

An idea for another cartoon came to mind, after posting elsewhere about Obama “spiking bin Laden”. Thinking of the Benghazi “response”, there seems to be a direct two panel comparison. Obama dragging bin Laden through the streets on his campaign, and the ambassador being paraded by al Qaeda in Benghazi.

Actual “spiking”, analogous to the alleged sodomy of the ambassador, might be too graphic, though fitting. Of course dead ambassadors probably don’t work well in caricature either. But the image of Obama carrying dead bin Laden with him, and tossing him by the podium at every event, seems an apt comparison.

The cartoon left out the thermos and Joe’s dog, Shithead.

We know that “Joseph R. Biden” “sounds like a typical bastard” and is the political equivalent of “carnival personnel.”

Do you think Ol’ Joe “has an office with orange and white stripes” and an “all-red billiard room with a giant stuffed camel?”

P.S. – The middle initial R is for Robinette, which evokes Martinette.

Another classic from Branco!