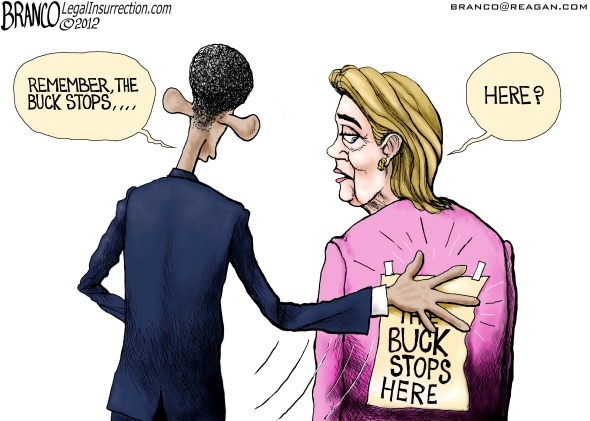 Yeah, Hillary, Obummer has got your back.

President Obama in the debate tonight (according to the Fox News transcript):

“Secretary Clinton has done an extraordinary job. But she works for me. I’m the president and I’m always responsible”

By falling on her sword, she acknowledges her incompetence and has ruined her chances for a 2016 run for anything.

“THE MASK HAS FALLEN–THE BUCK STOPPED WITH YOU”

What a heck of a day, your “mask” just fell away
And you’re trying to blame HILL for the loss!
Having seen the “real you”, the faithful you knew,
Are now leaving to find a new “boss”

Before now, you were feted and flattered
“I am your new savior”, you cried!
With teleprompter on, and sneer firmly in place,
Most refused to believe that you lied.

And those lies came so fast–you were sure they must last,
After all, you had carefully planned,
To subvert and destroy the Republic you loathed,
Would be done in four years at your hand!

We all started so well, on your “highway to hell”,
You and yours set a record for fraud.
That apology tour *seemed* a rousing success!
But we watched OUR GUYS DYING abroad.

Still, your lies kept improving, your policies moving,
Us closer and closer to a crash.
“Curb free speech”, “run on wind”; “we’ll let everyone in”,
And our “seniors”?—sorry; just don’t have the cash!

Since “the start of the end”, you must wonder again,
“How in hell” did we “rubes” find your flaws?
With your Media Whores, you should win all the wars!
You finagled and mangled our laws!

It took time BUT WE LEARNED that you never had earned,
Even ONE THING you claimed to be true.
(“But I sealed EVERY record” you whispered to friends),
AND NO ONE PLAYED “RACE CARDS”LIKE YOU!

Your plan’s fallen apart, and you don’t have the heart,
To “regroup”, “start again” or “revise”.
When proofs came of historic deceptions,
You could’nt keep straight your OWN lies!

You’re so horribly proud, you will NOT be allowed,
To just claim “one mistake” and move on.
You’re dismayed at the fury of the PEOPLE YOU CONNED;
And you’re STAGGERED your opponent’s so strong!

You will try to “play through”, till the voters tell you,
That your adventure in GOLFING is done.
Pack your things, leave our House, you despicable louse,
And STOP saying that you were “THE WON”.

AND EVEN IF YOU HAVE SATAN’S OWN “ANGELIC TONGUE” TONIGHT AT DEBATE TWO, IT WILL NOT BE ENOUGH–start packing.

Hope ol’Mitt decides to B’yotch Slap the snot outta the Boy King for this newest piece of moral cowardice tonight.

Sometimes the classics speak to us…

In 1983, Reagan accepted resonsibility for the deaths of 273 Marines…in 2012, Obama blamed Hillary…

Don’t need the dialog between Obama and Hillary. The cartoon is better without it.