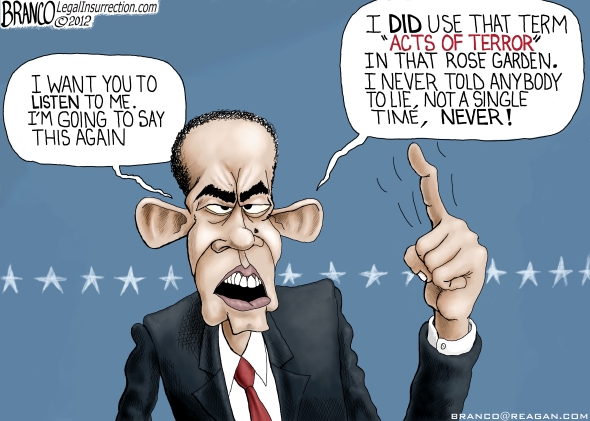 Sung to a well known song …

How dare that candy cane moderator fact check Romney? It isn’t her job to point out mitt’s lies, her only job is to move on to the next question. That was one of the worst moderation jobs i’ve ever seen. You didn’t see her grilling Obama when he said Romney’s tax plan won’t work. Typical liberal. The only reason mitt Romney clearly lost that debate was because of poor moderation

I’m not catching the significance here. I’m thinking it is maybe reference to Clinton being clear about “I did not have sex with THAT woman”, but if I don’t quite get it, I think the average guy won’t.

and yes, I realize I lose votes for the “throwing like a girl” comment. I played a lot of volleyball with very competent (and sexy) women, but the phrase still kinda works to describe Obama 🙂

Evidence of collusion on the Libya question (as detailed in link below).

Obama forget that he wasn’t supposed to know who “Kerry Ladke” was or where he was sitting in the audience. He walked right over, said “Hi Kerry,” then stopped and looked around with a faux-confused air, then pretended he didn’t know Kerry’s name anymore.

That’s in addition to the weird exchange with Candy, telling her to check the transcript, and she just happened to know the specific words he meant (though on Sept. 30, she was saying the admin. had refused to call it terrorism for a long time!).

The “no acts of terror” line followed some comments about remembering 9/11, 2001. Someone said Romney tried to make that point but was (as usual) cut off.

If Dems have so little confidence in their candidate that they’re sure he needs to cheat, why the heck do they think we should re-elect him?

What’s worse is that Crowley claimed during her “fact check” that Obama had claimed it to be an “act of terror” in the Rose Garden, and then evolved the story to the YouTube video of the next 10 days or so … which is completely wrong.
Then she started to claim it the other way around on the day after, but it was still an “act of terror” or something.