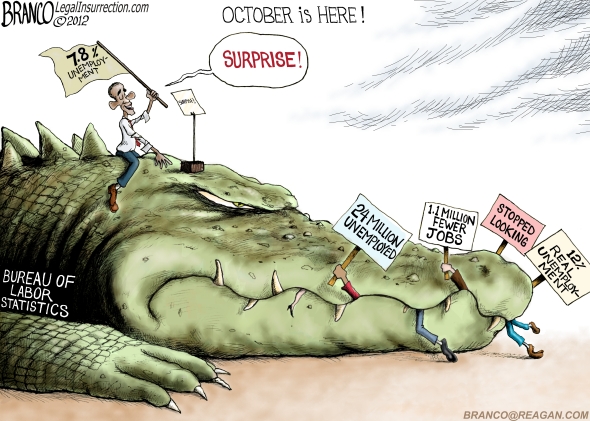 Here’s hoping that this “alligator” will take obama into what amounts to a “death roll” for his presidency on election day.

Actually, when teeth from the lower jaw are visible when the crocodilian’s mouth is closed, it means it’s a crocodile, not an alligator. Great cartoon!

LukeHandCool (who owned a caiman, a crocodilan cousin of the alligator from the Amazon, when he was a boy. In a large aquarium, Luke had a basking area and on the other end, a pool filled with goldfish for the caiman to catch and eat. Luke also placed a large twig in the aquarium for his garter snake, and that was his personal space. The caiman and the snake left each other alone in an unformal detente. But the day after Luke added a large crayfish to the aquaruim, certain he could defend himself with his claws, Luke came home from school to find the crayfish torn to shreds. It was back to a bipolar world of two superpowers, ecological perestroika rejected. Nature.)

Well, they discovered when they first had income taxes back during the time of the First World War that as you raise the tax rates, more and more people no longer pay them because they put their money in tax exempt securities primarily. And so the, the amount of money in tax exempt securities rose at one point to where it was more than half the size of the national debt and several times the size of the federal government’s annual budget –so huge amounts of money went into hiding. And so even though the tax rate that rose at one point to 73 percent, 73 percent of nothing doesn’t bring in any revenue to the government.

[…] Note: You may reprint this cartoon provided you link back to this source. […]