Zombies are the One Percent

Zombies are the One Percent

Posted by William A. Jacobson Saturday, September 8, 2012 at 07:00am 13 Comments
More Sharing Options

Here’s a pic of a car in Charlottesville, VA, of an OFFICIAL NAVY car with a bumper sticker showing our illustrious leader punching out “zombies.”

Are we to infer that these “zombies” are anyone who dares to disagree with him?

Whatever happened to “Dissent is patriotic”?

I should have more thoroughly vetted this, and regret not having done so. Turns out it’s a specialty plate available to anyone. It just looked so official! http://www.flhsmv.gov/dmv/specialtytags/miscellaneous/u.s._navy.html

Here’s the view, showing how easy it was to make the mistake: 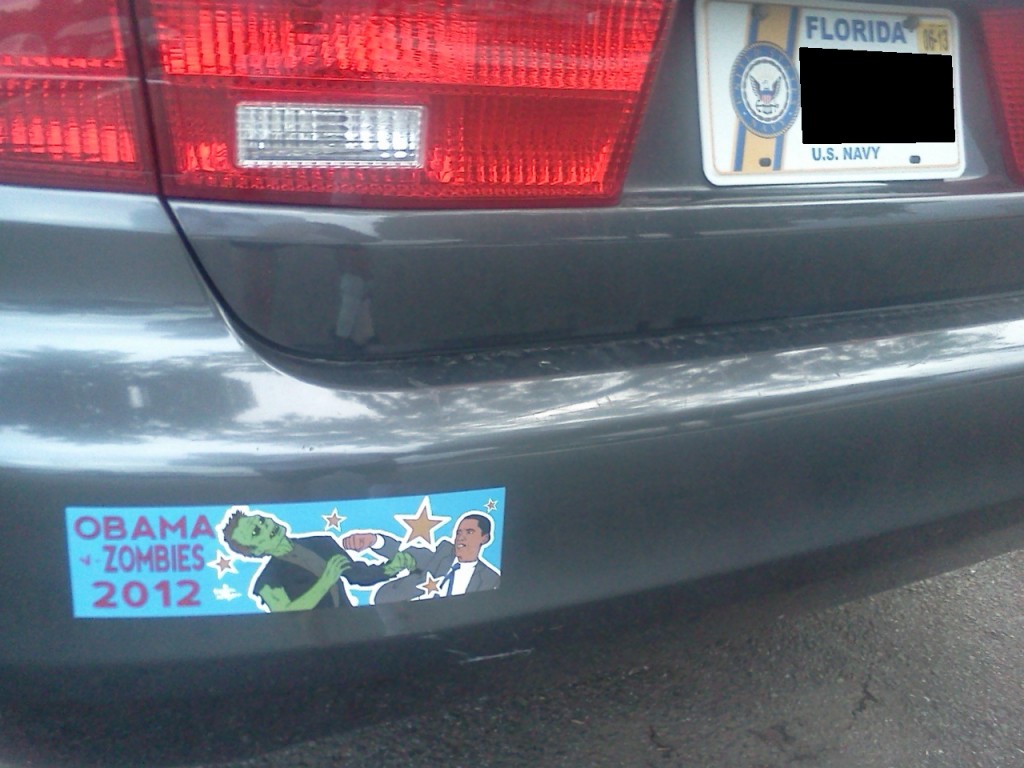 As an OFFICIAL TAXPAYER I would’ve peeled it off.

Amen. Government vehicles should not have any type of political bumper stickers — from any party.

The Obama faithful will—surprise!—be in for a rude wake-up surprise and take it on the chin.

From the party of “setting a new tone”, this is quite some tone!

An “Official Use Only” vehicle? Some swabjockey would be out there scraping it off with a toothpick. Then charge him/her/ghey with “Personal Use of Government Property”.

Reader J: We need a photo of the car that had that bumper sticker, the one with either the official US auto. license plate or the military ID.

There’s absolutely no justification for that political sticker to be on any government vehicle.

Professor: This is one time when showing the vehicle’s id is not only justified, it needs to be required. To do otherwise is bunk, a huge phony baloney dodge by whoever put that on an official government vehicle.

Exactly, Doug Wright. We need to holler long and loud so that everyone knows it was put there and the Navy takes it off. This is unacceptable.

I suspect top brass won’t be happy about this if it gets out.

Jason Mattera wrote a book back in 2011, called Obama Zombies. A pretty good book, aimed at his age group peers.

You see, the zombies were Obama’s followers, not the “eeeevvvviiiillll 1%” or whatever that zombie depicts.

Perhaps it means the Obama zombies are getting their butts kicked by Obama, the “One” they were waiting for”… ?

These lefties are mind-numbingly clueless!!!

(And, about this being on a gov’t car: there is a federal law making this “political speech” illegal, I believe. Maybe expose them that way….and add it to the list of so MANY other laws and Constitutional limits that are being broken and violated by this federal government. Hope&Change=Hoax&Chains)

Q: What did the Obama zombie say after seeing his neighbor’s wealth?
A: I’m GREEN with envy!

Q: Will Obama zombie lose the next presidential election?
A: Yes, he has NO LEG to STAND ON!

Ha! He’s punching his own peoples.

This one is much better:
http://imm.io/DCWG

I first saw this apt redesign of the DNC logo from a facebook page called “barack obama’s dead fly”. I don’t know who did the original redesign, but it is awesome.(I added a few filters on for more creepy effect)

Sailor, you are out of uniform.

Official Government plates are blue letters on a white background with – U.S. GOVERNMENT – at the top of the plate
and at the bottom – FOR OFFICIAL USE ONLY – .

this applies to military vehicles that normally traverse the roads and highways of any state of federal area. They may or may not have additional stickers issued by the unit they are attached to or the State that they are operated in.

On base they (if they don’t normally travel off the base and are not personnel transport vehicles) may have other I.D. numbers or plates.