Universal symbol of lost hope and change for the worse

Universal symbol of lost hope and change for the worse

The empty chair staring at the empty teleprompter.

Words are not necessary.

Now recognizable in any language. 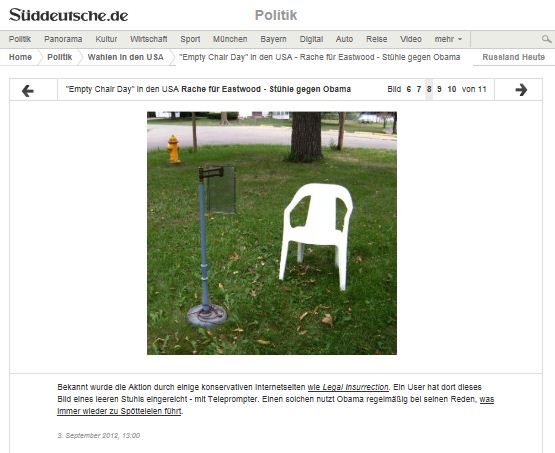 Wow. I just had BB King, singing “The Thrill Is Gone” jump into my head!

As I said before…a meme with LEGS…!!!

… and Robert Klein doing “I can’t stop my leg“

The empty head that will only be filled with Communist claptrap, somehow, I know not how, that should be part of the scene.

It says this is “Eastwood’s Revenge – chairs against Obama”. I didn’t really think of it as Eastwood taking revenge, just making a statement.

But it’s definitely significant that people in Germany ‘get’ the whole teleprompter thing, and that Obama is an empty suit/chair.

“Obama attended his PDB just 536 times — or 43.8 percent of the time. During 2011 and the first half of 2012, his attendance became even less frequent — falling to just over 38 percent. By contrast, Obama’s predecessor, George W. Bush almost never missed his daily intelligence meeting.

So he is not on the job as president … what chair is Obama filling? Besides golf, he said he would go as president to march on the picket lines. He meets with Trumka, Soros … Jarret a couple times a day. Media Matters is a regular, to coordinate propaganda with his MSM.

President Manufactured Crisis, and his “Never Let a Crisis go to Waste” administration is on the job. But it is not the job for which he took the oath.

La Chaise has a tee time at nine.

An empty chair in any language….

I’d like to see a “Million Empty-Chair March” on Washington D.C.

I think that Sally has a memorable name there. Elegant and empty.

BulletPeople » Empty Chair, Empty Teleprompter: the Internet Meme that Must Be | September 12, 2012 at 3:30 am

[…] Jacobson of Legal Insurrection started National Empty Chair Day. Today he wrote that one picture from that day may become the universal symbol for lost hope and change for the […]