Too big to be contained

Too big to be contained

Posted by William A. Jacobson Friday, September 7, 2012 at 07:00am 7 Comments
More Sharing Options

on just one bumper sticker.

Offered for your amusement, spied in Barney Frank’s Congressional District in the People’s Republic of Massachusetts.

“Obama Sucks too much for just one bumper sticker.”

All the best – keep up the good work! 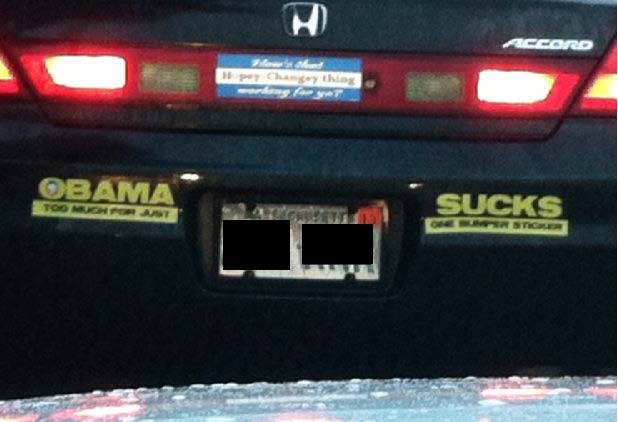 It’s all over folks UNLESS the GOP does something real stupid.

Let the incoming brain trust go to work on January 20, 2013 and begin the undoing of the damage that’s been inflicted on us.

GO, that “UNLESS” as we know, ain’t outside the realm of possibility..

Oh, it’s more than the GOP not doing something stupid. The cultural factors which propelled him into office are still in play. So, I see the situation as tenuous at best.

One wonders what it would take for any lead Romney might have to evaporate. Would, say, a drop in the unemployment rate of 1 or 1 1/2% be sufficient? What economic news might hold sway? Something on the international scale that would be a major influence? I think it wouldn’t take all that much for the scale to be “tipped” in Obama’s favor.

The underlying issues are what they are (over-reach of government, debt, SCOTUS decision that allows control of social behavior by means of a tax, etc.). Yet, I continue to have the distinct belief that for many people the attitude is “who the h*** cares?” as long as they have what they want. In other words, things look so much better on a “full stomach.” Two (2) months to go . . .

This is true, as well, AL. Combo of both and I’ll pack more foodstuffs and ammo.

Backs up the bumper sticker Turfmann.

I have seen that bumper sticker before… in my garage. My wife has it on her car. We live in deep blue Washington state and it has been interesting. When she takes the car in for maintenance she is treated like a celebrity by the mechanics “Wow, that is the lady with the bumper stickers”.

She put it on in 2009. We got mostly positive hand gestures. That changed around the 2010 election. It was about 50/50 thumbs up versus middle finger. (Although my wife claims the latter might have more to do with the way I drive). All that quieted down in 2011.

In 2012 the intensity is back up again. But it is ALL positive. Lots of people honking and giving us the thumbs up. Multiple instances of people coming up to us in parking lots with nice things to say. We even find thank you notes on the windshield.

So, either my driving has improved or the 2012 election is going to show that 2010 was just the warm up.

Love it! Even here in Deep Blue Sarasocialist Fl starting to see many Romney/Ryan Bumper stickers! People go crazy in a good way when they see mine!