The love that dare not shut up

The love that dare not shut up

My wife went to an extremely liberal high school, and for whatever her reason, is Facebook friends with many classmates who now are certified members of the Obama cult of personality.

It is a never ending source of amazement how deeply these people, now in their 50s, are addicted to love of Obama.

Mankind has no greater love known than that of upper class liberals for Obama. It is the love that dare not shut up.

Today she spotted this photo posted by one of these “friends” and had to show me: 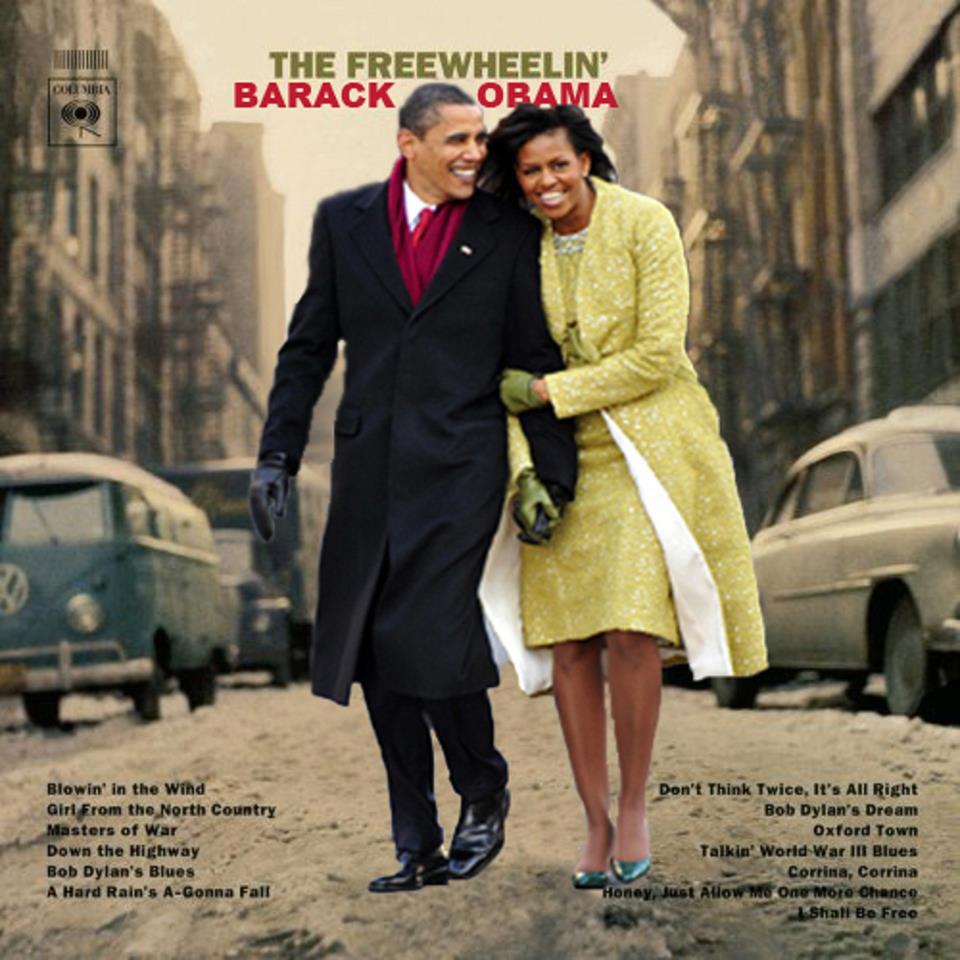 The Freewheelin’ Bob Dylan is one of the first albums I ever listened to.  I’m pretty sure I’ve played some of the songs here before.

There is a song on that album which I think fits this election season.

They cannot abandon him now or they will have to admit he failed and they were wrong all along. That is why they get so mad when we point out Obama’s record. That’s why they won’t discuss it.They are lying to themselves and if Obama loses in Nov. they are going to have some hard reality to deal with.

Ann Althouse is going to be mad you did that Dylan album cover parody before she did.

Over at Maggie’s Farm they are featuring Dylan’s Not Dark Yet.

(Either it’s be a Bob Dylan Sunday, or there’s something Dylanesque in the air of the blogosphere)

I live among some Leftists who see Obama as an incompetent dud but they will still vote for him. What’s interesting is how they’ve contrived ways to explain his failure. “He’s been too weak and hasn’t taken on the evil Republicans” is the most common. Others trot out moral equivalence and say that Romney will be just as bad and America is irredeemable.

But I find the love affair categorically weird. This guy is so banal, droning, mirthless and uncharismatic who could possibly feel ardor for him? He hasn’t had a new or interesting idea in his entire life. He has no intellectual curiosity that I can see. He’s a bore.

No, not you Raven … I’m quoting a sentient congressman that had the balls to speak up to the liar in chief, during a SOTU speech.

The cease-and-desist order against playing his music on this right-wing, extremist website should be coming via email from Bob’s lawyer, shortly.

“cease-and-desist order”??? Bob just might be honored to be on this web site! Check out Another Side of Bob Dylan and especially his Argument With a Leftist (poem #10).

Thanks for the cool link, donb, my friend (and the recent kind words).

I do believe I remember reading that commenter CassandraLite lived next door to Dylan, or in the same neighborhood or something, in Malibu. I believe Bob still lives in Malibu (just a 15-minute drive up the coast from here in Santa Monica).

Found it. Lived next door to him.

Liberal, older women must be attracted to effeminate men. I’m from a earlier era, when men were men. The cult fascinates me because of the sexualized subtext which gets mighty interesting because of his race. No one dares to go there.

I did dare to go here:
Obama’s Speech Brings the Convention to a Climax
http://www.youtube.com/watch?v=aY5T_hMBW0U

Surely Mrs. Jacobson’s friends know about the Professor’s blog … if one knows, they all know.

Having experienced liberal tolerance from my high school classmates, I think it’s a testament to Mrs. Jacobson’s sweetness that they all remain friends with her. In this case, sweetness must be thicker than politics.

LukeHandCool (who, along with his wife, is a huge Mrs. Jacobson fan, and who, quite frankly, would slay a dragon for her)

Professor Jacobson, It must be something that they are dumping in the Scituate reservoir that the folks around Providence are drinking. Just about everyone I know out here in Foster/Glocester land, where we all drink well water, are just as vocally anti-obama..Still,it is beyond me how partisan and close minded sooo many Rhode Islanders can be…

Few things are as hard as self-admission of a fatal flaw in one’s own intellect.

Humility is both unsought and unachievable for many.

With that said, I have more respect for someone who takes an honest stance than those who shrink away from it.

“If dogs run free, then why not we”… far, far from Obama?

I only have one friend that is a liberal. I sent her everything before the election and she still voted
for Obama. Don’t know how she’ll vote this time and I
don’t care. She knows my views and she has the information from the last 4 years. We talk seldom and I like it that way because I’ve lost all respect for her. I could never have a person as a close friend who is informed and still a liberal.
I don’t have to have people totally like minded as friends but being stupid is just to hard to be around.

These hardcore (northeastern primarily) Obama Cultists are not ignorant or deluded and know full well that they really did vote for a Naked Emperor but they’re too embarrassed to admit they were the “victims” of a hoax. (I’m putting “victims” in quotation marks because there was enough information available in 2008 to show that nobody with their eyes open was defrauded.) When their own children get passed over for a place in a college or for a job and they can’t defraud their way into it like Elizabeth Warren did, they might start to realize, as the Country Joe McDonald song went, “What are we fightin’ for..?”

If we can’t count on Romney getting rid of all of it, why bother? Romney pussy-footing around getting rid of most of it might leave in chunks which need to be got rid of.

Romney likes the part about not being kept out because of pre-existing conditions. There are ways to deal with that, and we can’t make everybody whole. Some people avoid insurance until it is too late, and then want insurance for their pre-existing condition. We cannot save everyone. As for insuring young people, many states have mandates which make even plain catastrophic insurance unobtainable or very expensive. There are ways to cure those problems without 0bamacare. Get rid of 0bamacare, then solve those problems from scratch.

I’d be interested in hearing any and all theories as to why there seems to be a groundswell of marxist thinking here in the U.S…..

What used to be relegated to the fringe is now seemingly mainstream and institutional.

I pose this question to the professor foremost, as I respect his insight.

It is a contagion that has vectored outward from American academia.

Obama wheelin -n- dealing .. his Chi-town schemin is with other peoples money.

…yadda yadda love comes once and when it comes you better grab it fast cuz sometimes the love you grab aint going to last and. I believe I musta, You know I think I musta

I musta vote out this clown .. GTFOOOOOUT!

When a elitist lib votes for Obama to assuage racial guilt, it matters little how Obama performs. The guilt remains assuaged.

The zombie like adherence to Obama that even intellectual people have, accentuates to me why the more hard core assault needs to be taken.

Graphic evidence of Obama’s connections to hardened communists, and to anti Israel efforts, and to Chavez … these people are in a drug induced stupor. Mind numbing discussions of the difference between a billion and trillion do not sway the numb skull.

“addicted to love of Obama”

oh .. and most amazing is that many still adhere to philosophy from these young drugged up dreamers, as if they were some sort of true sages.

They spewed some verbiage probably attained from communist flyers or hallucinated dreams. They had never run a business, raised kids, dealt with true government oppression, etc.

They were young punks with psychedelic illusions. Those are nice, but only realized under terms realized decades later. And in the US, most never realize that life can be very hard. But we sing along with their songs as if they speak for God.

We should remember the tunes, the illusions we had, and then we must grow up and face some harsh realities. The freedom others fought and died for, are still not guaranteed. And outside the US, freedom and basic necessities are a luxury. What our parents fought for (while 55 million died), is being lost.

“Love” of Obama is a love of a adolescent fantasy. Period.
The children of these people will have a righteous grievance against their parents one day, for destroying their futures.

AND, shouldn’t it be the “Freeloading Barack Obama?”
http://thefinereport.com/2012/09/the-freeloading-barack-obama/

Their adulation of the Obama’s is a result of their joy at being able to “prove” they aren’t redneck mouth breathing bigots like the Republicans.

That’s usually what most positions liberals take is all about; making themselves feel good, superior, smarter, cleverer, more deserving of life than the hoi polloi (i.e. everyone not liberal/progressive who doesn’t think like them).

Liberals are snobs or at least wannabe snobs.