So writes reader Jim, who sends along several photos from the Romney-Ryan rally in Jacksonville which is starting as of this writing. (added: Prof. Reynolds also is posting reader photos) 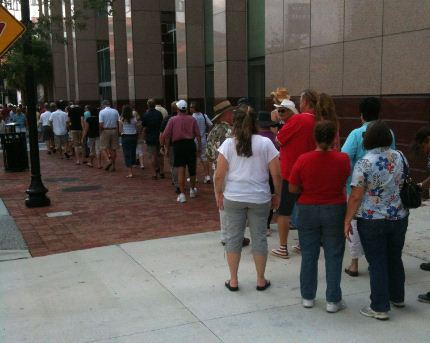 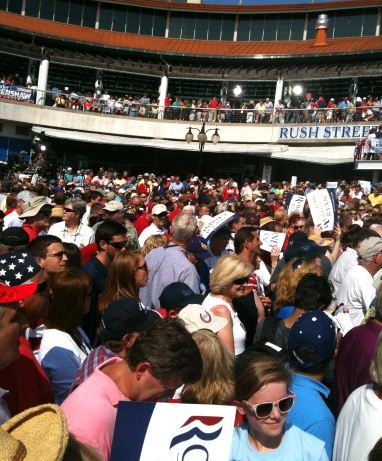 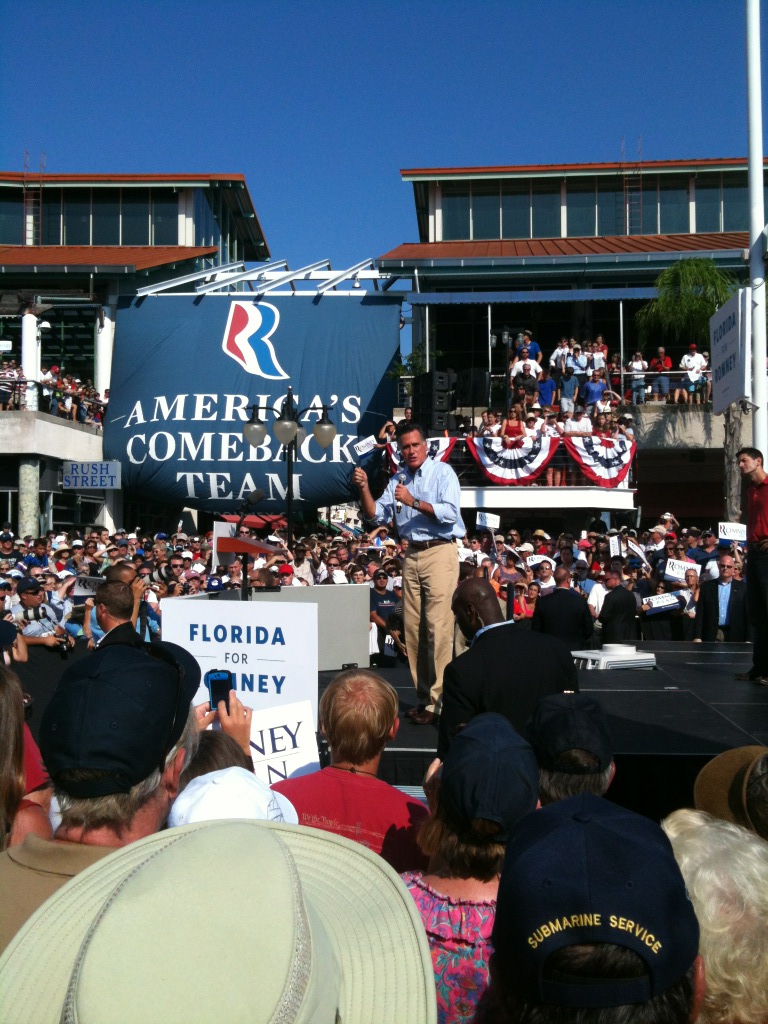 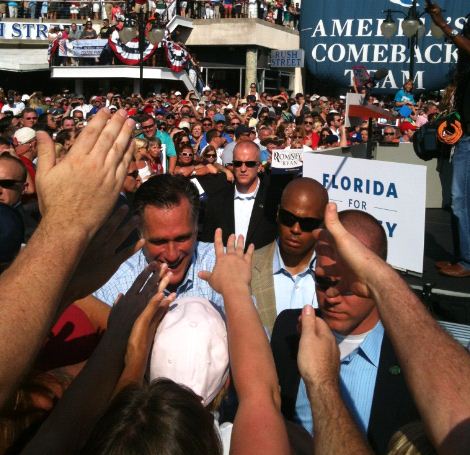 Post-script – Jim’s phone ran out of power so he couldn’t take more photos, but he did send along this account of the afternoon:

Jacksonville Landing was absolutely electric with I would estimate two to three thousand people screamIng for Romney and Ryan. It was a total blast to be there. It was literally one of the most fun things I have ever done.

Speaking of that, I am surprised at how many African-Americans were there – there were a lot.

Tons of military veterans too.

Romney and Ryan both look fantastic up close. Ryan is obviously in superb physical condition and Mitt looks great too. Their speeches were great and covered some of the same ground as their convention speeches, but they also totally hammered Obama for the unemployment rate, the drop in average family income of $4000, which I don’t recall hearing before, the national debt, huge cuts to defense spending looming, etc. Mitt also reiterated his 5-point plan. The crowd loved it.

Ann Romney spoke for several minutes too, and she was great.

But the best part was after the speeches were over and Mitt and Paul Ryan came down from the stage to shake hands with the people. Mitt really tried to connect with everyone he could. I pressed forward and eventually got to shake his hand. He had a firm handshake and looked me right in the eye for a split second. I actually forget what I said to him because it was such an insane moment.

I was actually a little afraid because so many people were pushing behind me to get a chance to shake Mitt’s hand. It was totally insane. Like a mosh pit at a rock concert, like maybe an AC/DC or Led Zeppelin concert!

The level of enthusiasm for this ticket was shockingly high in Jacksonville.

And outside I counted 9, yes 9, lame protestors wearing purple SEIU shirts and screeching unintelligibly. It was perfect.

Just what I was thinking. A lot of expectations building. If Romney doesn’t junk Obamacare as promised he’ll singlehandedly collapse the republican party. I trust he understands this.

Oh I have no doubt he will repeal it. Probably going to go with reconciliation though since the dems will throw a massive hissy fit. What I worry about is what he is going to “replace” it with. That is going to be the big kahuna and that’s why I was worried about nominating him as our candidate back earlier this year.

I didn’t think he would repeal it until he included repeal of Obamacare in his acceptance speech. Maybe I’m naive but I believe him.

Shout-out to my homies in J’ville! Extra shout-out to Jennifer Carrol and her sweet family, with whom I went to church. w00-h00! I’m over here! *waves*

Looks like an extreme outbreak of sanity.
Just wow.

What, no help from Oprah?

EVEN THE MOST “ACCURATE” POLLS ARE DECEIVING: R & R HAVE WON!

R & R “HAVE CAPTURED THE MAJORITY’S HEARTS”
“GET NEW CONTRIBUTORS BY THE TENS OF THOUSANDS EACH WEEK”
” HAVE ‘WON’ THE ‘MONEY COPETITION’–TENS OF MILLIONS AHEAD
“CROWDS SEEK THEM OUT; CHEER THEM ON; ARE EXCITED TO HEAR THEM’
“HAVE SPECIFIC PLANS; REALISTIC GOALS WHICH WE WANT”
“THE ONLY REAL WORLD, EFFECTIVE, EXPERIENCE AT MAKING MONEY,
SAVING BUSINESSES, MAKING ‘HARD CHOICES’ FOR BAD BUSINESSES…”
“HAVE BEEN SCRUTINIZED AS TO E*V*E*R*Y*T*H*I*N*G* AND PASSED–
Who is Barrack Hussein Obama, Barry Soetoro, or [fill in the blank]? EMPTY CHAIR

DO NOT WASTE OUR TIME, THE ELECTORATE’S TIME, GOLFING
DIVIDE THE COUNTRY
DO NOT DEPEND ON THE CORRUPT MEDIA’S FRAUDULENT SUPPORT

R & R WIN BIG; CONSERVATIVES RECAPTURE THE SENATE; EXTEND LEAD IN HOUSE; AND GET OUT COUNTRY WORKING AND HAVING A FUTURE AGAIN.

VISUALIZE VICTORY: Make supportive comments; “talk to your friends”; plan to drive people to vote; contribute what you can; send e-mails of encouragement; PRAY; and VOTE IN NOVEMBER.

Another pic of the Jacksonville event, with an EXCELLENT banner showing the messaging genius of the common folks…

Omgoodness! As the owner of a small and struggling business….
YES!!!!!!!

The new, cutting edge campaign strategy is to limit the attendance at campaign events to small numbers of supporters so the Presi….I mean, candidate, can have a more intimate interaction with his people. How can R & R effectively get their message across to thousands of screaming, frothing at the mouth right wing nutjobs, like those in the pictures?

Some poor soul has to speak to those teeming masses, yearning to be free.

The problem is the they are so noisy when they teem. One’s periods of quiet contemplation can be so easily disturbed.

Well, my very first comment on LI already has four “Dislikes”. Are those four Obo the Clown supporters, or is sarcasm not appreciated here? If not, I’ll avoid it in the future.

We love sarc. Just a bit of clairity will solve the misunderstanding. When I read your first post I thought Joke or Lefty?

Nah, we love’ya, mostly! The “Disses” probably were from those few, very few, wingnut trolls that like to stop by and dip their poison pens in the water, so to speak!

I think maybe some just read it too quickly. Don’t be offended. 😉

Put a sarc tag after your statement.
Like this. /

Don’t give it another thought, rinardman. Trolls are a fact of life around here.

I knew it was snark instantly.

P.S. Did you not see the 24 (to date) “Likes”? That’s an impressive number, even for seasoned posters.

I thought your comment was really funny! Keep it coming, I love having to think!

rinardman, some of know and love you from days past and blogs gone. We get it. ;->=

Dude! I see you. I knew what you were saying, and played off it.

Some here don’t read carefully, and some just don’t have a sense of humor!

I’ll try to be more obvious in my snarkery. And, if I think I might be too obtuse, I’ll use a sarc tag.

BTW, I’ve been hanging around here for almost a year now, and I think the level of comments here is one of the best on the right side.

Wes Cowen of Cowens Auctions , Cincinnati Oh. ” 50 cents ,do I hear an opening bid of 50 cents on this chair?”

So we get 15,000 patriots in attendance and they get women dressed as vaginas. I’ll take the former over the latter all day, everyday, and twice on Sunday.

[…] “We Own This Country”: Clint Eastwood Reloaded (with a superb video) and the fact today’s Romney-Ryan event in Florida is packed. Given the tepid, pathetic performance of Obama at Fort Bliss, Texas, I think we can safely assume […]

“People in this country are ready for change and hungry for a different kind of politics and … for the first time in my adult life I am proud of my country because it feels like hope is finally making a comeback.”

Although I did not originate the comment it fits my view of the current situation very well.

Yet more proof that Americans have correctly perceived the threat, and they are responding.

Hey Obama (and your buddy Fareed Zakaria), looks like your planning (and hoping) for that “Post-American World” may have been a bit premature.

Obama and his mob of leftist loons are about to get a lesson in American exceptionalism that they will never forget.

It would have been so cool if Donald Trump would have walked to the podium Thursday night and said “President Obama, you’re fired!” grin and walk away.

The Romney team should work on getting him to do that in a high profile setting…it would really rattle teh Won.

Jim, thank you very much for the report and pix. You do good work.

[…] Insurrection has an on-the-scene write-up. Share this:TwitterFacebookLike this:LikeBe the first to like this. This entry was written by […]

Remember: Sarah Palin really packed them in, too, and you know how that turned out.
As Instapundit likes to say: Don’t get cocky, kid.
Keep working like you think it will be too close to call!

True, one must not get toooo confident, but when you think back to the Chick-fil-A day, why wouldn’t you think that that many all-American Americans aren’t going to swarm the voting booths? Must be some hope in those numbers. Please, dear God….

Meanwhile back in Charlotte. “My name is Obamandias…” Look upon his melting image and fall to the floor to laugh your butt off.

Look upon my works, ye Mighty and… oh sh!t! HEY! Somebody get this rain off me!

I was at the rally and found the crowd to be absolutely amazing. Mitt and Paul were like rock stars entering and exiting the stage. Wild, wild crowd. Loved every minute of it. Oh yeah also encountered the 9, yes 9 SEIU protesters. I told them they were a sad, sad bunch of humanity. I could tell by the quizzical looks on their faces they didn’t know what “humanity” meant.

Obama also drew a reported 10K crowd to his event in Urbandale, Iowa (outside Des Moine) – by staging a free rock concert. I never heard of the groups, but am told they were iconic indie groups to the under-28 crowd.

Great idea, since he can’t even fill up a high school gym by himself anymore. Heck, if he’d just give away free beer, I might go myself.

In a nutshell, isn’t that his whole program?: “I’ll give you free stuff and put in all on the credit card!”

I’m over in the panhandle of Florida on the Gulf Coast (Gulf Breeze – about 8 hrs drive to Jacksonville) so I did not make this event.

Romney/Ryan may not make a visit to this area as we are already solid against Obama and have been credited with defeating Al Gore in 2000.

Palin made a visit here in 2008 and we stood in line for 3 hrs before they closed the Civic Center at the Fire Marshall’s direction.

Never got in for the rally but was kind of glad the crowd was just too large for all to be entered.

Romney/Ryan will win Florida in a landslide – do not doubt me.

I voted for Romney in 2008 FL Primary because Fred Thompson got out after South Carolina and I didn’t want to vote for McCain.

I voted for Santorum in 2012 FL Primary because Herman Cain got out and didn’t want to vote for Romney.

I’m going to vote for Romney in the General Election in 2102 because Obama must be defeated.

Plus, Romney is really growing on me. His pick of Paul Ryan was inspiring.

11pm Jacksonville news twit (WAWS I think) reported “hundreds” were at the event. Could not force herself to honestly report “thousands”. Lots of coverage to the 9 protesters too. No question as to direction this station leans. Lousy dishonest reporting.

LOVE THIS..!! I’ve become quietly confident that my adopted home-state of Florida will go Mitt-Ryan in November with a not-even-close possibility of 2000 ‘dimpled chads’ BS.