Obama leads from behind as violence in Middle East escalates

Obama leads from behind as violence in Middle East escalates

Violence continues to erupt across the Middle East and North Africa today following the attack on the U.S. embassy in Libya on September 11 that killed the ambassador and three others Americans. An interactive map of the violence is available from National Journal detailing where and what is occurring.

In a press conference today, White House Press Secretary Jay Carney said there was “no actionable intelligence” in advance about the attack on Libya, and refused to comment on whether U.S. relations with the Muslim world have improved since Obama took office.

Carney was questioned over whether the White House had asked YouTube to pull the anti-Islam film, blocked by google, that the media has been fixating on as the reason for the Middle East violence. Carney said that they asked YouTube to review the video to see if it violated their policies. YouTube had already said earlier this week that it did not violate any policies.

President Obama’s “lead from behind” strategy in the wake of an attack on U.S. soil continues despite conflicting information about whether the attack on the embassy was coordinated in advance. According to the State Department website, “any attack on an embassy is considered an attack on the country it represents.”

And yet, the official Obama twitter feed today was focused on Olympics and Beyonce and Jay Z: 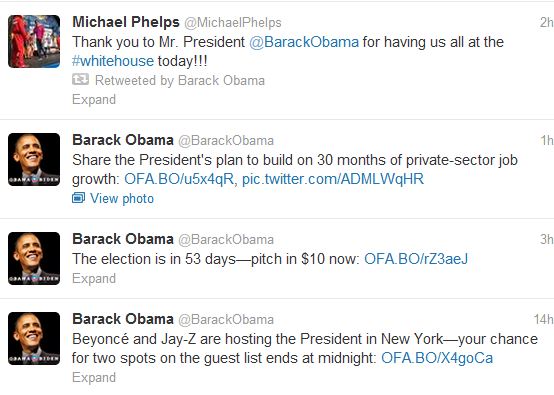 Paul Ryan gave a speech to the Values Voter summit today where he said that Obama is “skilled at striking heroic poses against imaginary adversaries.” America was attacked this week, enough about Beyonce and Jay-Z, President Obama.

Well, I suppose if you do intentionally ignore all of the simultaneous (and even in the last 50 years) wanton killing of staff and the torching of the Embassies of Switzerland, Lichtenstein, Angola, Monaco, Bangladesh, Iceland, Norway, Belize, Belgium, China and Russia, (did I miss any others?) then it might be possible to incorrectly conclude that the primary (if not only) lightening rod of all of the Islamist mob violent could just maybe in some small way be directed at lil’ ol’ us, huh?

Well, it has become obvious. The One doesn’t care if the world burns while he plays the fiddle and goes on “Studio 54” mode with Beyonce and Jay-Z.

If the American People could just see it that way… But it will never happen, because the Palace Guard Media will never let them know.

Is that you, “dutch”? A great analysis soundbite either way!

The Obama Administration vows to track down and capture those French photographers who dared film the Duchess of Windsor and publish photographs of her topless. Reports of outraged Brits storming the French embassy…

This is apparently real: U.S. commanded MFO base in North Sinai under attack by Muslim terrorists, dead reported…breaking

A new political ad features Sam Jackson stating, “‘Wake the f–k up, Vote for Obama.’” Well, Sam, those of us who were awake didn’t vote for him the first time. So, there’s little likelihood we’ll vote for him on the second pass.

You see, Sam, we were awake when we heard Michelle Obama state, “People in this country are ready for change and hungry for a different kind of politics and … for the first time in my adult life I am proud of my country because it feels like hope is finally making a comeback.” Knowing that she and Barack share similar sentiments, we understood the implications of this.

Basically, it amounts to “We’ll love this country, when it becomes the sort we think it ought to be.” Oh, this can’t be good. It’s like saying I’ll marry this woman and change her into the person I think she ought to be. Not good. Not good, at all.

So, Sam, unless BO is ready to love this country, warts and all, it doesn’t make him a “bad” person, but it surely doesn’t make him fit to be her president. That’s what those of us who were awake saw in 2008, Sam. Little has changed since. We don’t necessarily approve of your language, although we do hope you’ll use it soon. As in, “Wake the f–k up,” Barack, Michelle. You lost the election. You’ll have to move!

Magic thinking will kill you…and many people you care about…if YOU LET IT.

Obama is “skilled at striking heroic poses against imaginary adversaries.”

And supine postures against REAL adversaries.

Just struck by something…

Have we a picture of Obama bowing to an American…?

Not that I know of. He reserves his Mussolini impersonation for Americans.

BTW, The Germans get it.

No wonder the Pentagon is buying Chevy Volts-

All these Romney gaffes are increasing global warming exponentially.

they can block the video all they want. I’ve been self hosting it and blocking a lot of middle east root attempts for last 3 days.
screw ’em.

gee someone disliked that, I must of hurt someones feewings.
oh well..I’ll easily get over it because I do not give a damn.

Yeah, vote for Obama and you too can be Oblivious.

What is a Jay-Z? What is Beyonce? Are these codes names for special ops to be carried out to protect our American embassies?

Jay Carney said there’s no intelligence capable of action within the administration?

They keep going on about the video, how about the fact that Obama is running around bragging about killing Bin Laden and other Muslims figures. I don’t recall another president making such an issue of killing anyone in our history. When you do, it is associated with consequences.

Maybe Obama will stop saying that he did the killing and actually give credit to the Seals. That way he can disavow and reprecussions.

You embedded screen grabs of tweets instead of embedding twitter links directly in your HTML?

How lame is that?

an embed tweet disappears if deleted while a screengrab does not.
you didn’t know that?
how lame is that?

I think that the most appalling development is the fact that good ol’ J. Carter has suggested that O’bammy follow *his* example in handling the Iran hostage crisis.

So sad that it is almost laughable. J. Carter giving any sort of advice.

Now, correct me if I’m wrong but weren’t the Tehran embassy staff released on Reagan’s swearing in day?

Doesn’t this support the premise of, “clarity of purpose,” that Reagan AND Romney have spoken of?

I hope Netanyahu wins that contest to attend the Jay-Z Fundraiser. That’s the only way he’ll have any discussions with the President.

American Journalism Has Been Officially Outsourced « Temple of Mut | September 14, 2012 at 4:14 pm

[…] Anne Sorock: Obama leads from behind as violence in Middle East escalates […]

Bunky has got him some reelection panic goin’ on right ’bout now, ah’d say. He was already in trouble a-fore all th’ gaffes n’ missteps addressin’ these here embassy attacks, cain’t git hisse’f ‘bove 47% when an incumbint needs ‘im at least 50% an’ it ought t’ be 55% fer comfort. Now one o’ ‘is per-ceeved strengths – forn palsy – is on display as clumsy an’ amateurish, blind t’ effects or optics, an’ th’ apparent collapse of ‘is en-tar middle east plan. Cain’t golf or basketball fer shit. What’s ‘e got left? Ah doan know either, an’ it’s makin’ Bunky commit unforced errors at a remarkable pace. Cain’t-cha jes’ imagine all th’ tight-lipped little ‘discussions’ goin’ on as we speak ‘tween Axelrod, Jarret, Ploufe, Michelle, an’ th’ good folks back at headquarters in Chicago?

Hee hee. It’s a rollercoaster ride when the election means so very, very much, ain’t it? Reminds me of following my favorite team through the NCAAs or playoffs – belly-rolling ups and downs, despair followed by jubilation by despair, ever cycling. I’m watching my political enemies face plant, rise, and face plant again. I can take no joy, for people are dying. Unable to change what has happened, I can only hope that what it reveals about Obama leads to his ouster.

The Fast & Furious body count is over 300 and counting. The 9/11/12 uprisings body count is 4 and may very well rise.
I sincerely hope America comes to understand we have a president whose incompetency is getting Americans killed.