From friend of the blog, soon to be appointed Director of Photoshop Services, Patricia.

To me, it rather brilliantly points out the problem. 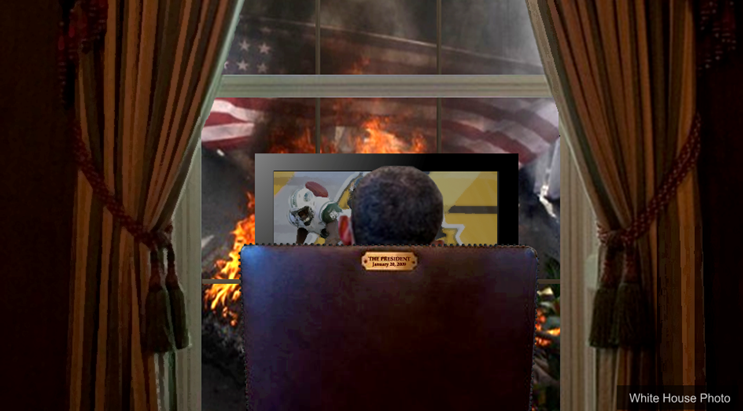 WOW! Who would have thunk it?

The Blaze has the breaking story: “The U.S. State Department is currently in negotiations with the Egyptian government for the transfer of custody of Omar Abdel-Rahman, also known as “the Blind Sheikh,” for humanitarian and health reasons, a source close to the the Obama administration told The Blaze.”

Terrorist should be shot. No need to maintain festering memories…

Sure, sure. Return another one of their heroes. We’ll never learn.

Whoever that is , he’s got white guy hair. Also his ears are to close to his head. I think he’s a ringer. One factor arguing for it being O. is the burning Flag.. . . I cant say I would be surprised with the Blaze report.

Clint was wrong when he said the chair was empty.

That goes with my new video:

How about that game? While Obama was preoccupied with other things apparently more important than the defense of American assets around the world he allowed a terrorist attack on our assets then attempted to cover it up by colluding with al Qaeda by accepting their propaganda that the whole incident was over a video.

BEFORE any protest occurred there was a terrorist attack on the US Libyan Embassy. Now why would Obama and his band of feckless incompetents dissemble over the time line of 4 dead people? It is because he had 2 to 3 days of advanced intelligence there was going to be an incident on the anniversary of 9/11 but he was preoccupied with more important stuff than to beef up security as standard response protocols called for. Obama and Clinton didn’t need to plan anything, all they had to do was give their go ahead to underlings to carry out what everyone knew what needed to be done. One has to be truly obtuse to not recognize the significance of 9/11.

The definition of feckless: “describes people who lack purpose, intelligence, or organization and are unlikely to be successful–lazy, irresponsible, and unproductive” http://vocabulary-vocabulary.com/dictionary/feckless.php

The lack of diligence of this whole group is astounding. Blaming some guy for producing a video used by al Qaeda to fan the flames of rage of gullible Muslims is typical of the incompetent covering up their failures. It’s always some else’s fault.