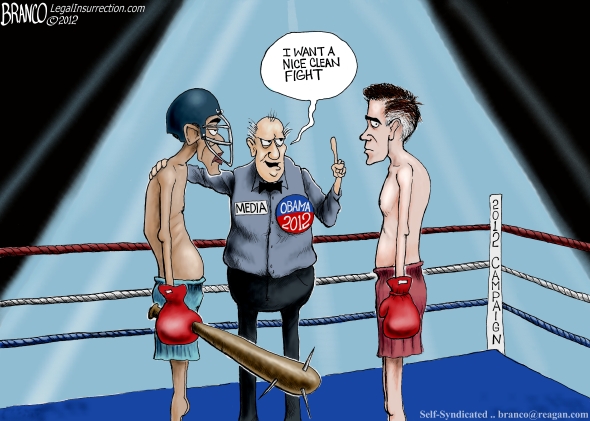 That about sums it up, so Mitt will need to “float like a butterfly and sting like a bee!”

With public approval of the MSM in the single digits, I agree.

Romney has proven himself before and the anointed one with no record to run on should prove easy prey.

Talk about timely…
WALL STREET INSIDER: Beware The First Presidential Debate – Obama Will Cheat
“Did such a thing occur – outright collusion between the Obama campaign and the architects of that first presidential debate in 2008?”

Obama conveniently left out the Democrat impact on the budget after the Party took Congress in 2006.

Sounds like a response that Mitt Romney could use today by just changing 8 years to 4 years.

Don’t be silly. Obama has no need to cheat. Don’t you know he’s already been declared the winner of each debate by the MSM? You can write the headline right now.

Commodus in the blue trunks, soon-to-be-Gladiator in the red?

Branco’s cartoons have a professional quality that is awesome. The message of this latest is very effective and conveys understanding instantly. Yes, that is indeed how the media are behaving, rigging the game against Romney.

Concept is great; the visual captivates; just one key mistake which can’t be laid at the artist’s door: We do not see the Heavenly Host joined by the nation’s patriots since our Revolutionary War quietly, invisibly MASSED BEHIND ROMNEY:

“PATRIOTS AND FELLOW AMERICANS, OUR FAITH SHALL YET TRIUMPH”

For reasons “unexplainable”,
But in wise eyes still quite blamable,
Our current lives, to many, grow oppressive (1).

Each day’s harsh news, and harsher demands,
To those with sight reflect a plan (2)
Pursued by evil powers quite obsessive (3).

To kill Columbia (4), to kill our faith,
To mock our freedoms, once kept safe,
These enemies of love and life conspire.

Their schemes, they think, cannot be known,
But Heaven has ways and means not shown (5),
To those who bend the knee to worship evil.

Let us awake and arise from our insensate state,
With Liberty’s hopes and dreams at stake,
Our prayers to Heaven shall not go unanswered.”

We shall bend our knees to Our Father’s Good God,
We shall recall harsh paths our Forefathers trod,
That we, their heirs, would live lives rich in freedom! (6)

Then, in their memory, and with their faith,
We shall live with honor, ‘til honor’s kept safe,
And once again the Liberty Bell is pealing. (7)

Through every trial, every fear,
God’s unseen angels linger near, (8)
Their sacred mission is our preservation!

So trusting in the Holy One,
We pray as taught by The Holy Son, (9)
And once more raise our eyes to Heaven believing!

1: Suicide is now the most prevalent form of (a) accidental death and (b) troop fatalities. This truth, while shocking, cannot be deemed unexpected. Those good souls who watch our nation being systematically dismantled and destroyed, from without and within, risk despair.
2: Our current dilemma is hardly accidental: “You didn’t build that” applies to the minions and slaves to darker powers.
3: Ephesians 6:12 (KJV)—“For we wrestle not against flesh and blood, but against principalities, against powers, against the rulers of the darkness of this world, against spiritual wickedness in high places.”
4: Columbia – the United States of America; new Latin; from Christopher Columbus; first see about 1775.
5: Isaiah 40:26 (KJV)—“Lift up your eyes on high, and behold who hath created these things, that bringeth out their host by number: he calleth them all by names by the greatness of his might, for that he is strong in power; not one faileth.”
6: “God of Our Fathers” (National Hymn) composed in 1876 with lyrics by Daniel C. Roberts and melody by George W. Warrant to commemorate the American Centennial of 1876—inspired verse worth reading NOW. All four verses are simply overwhelming, each more necessary to us than the last, but the Fourth Verse, often ignored, now compels our attention: “Refresh Thy people on their toilsome way, Lead us from night to never ending day;
Fill all our lives with love and grace divine, And glory, laud, and praise be ever Thine.”
7: 1 Corinthians 13:2 (KJV)—“ Be watchful, stand firm in the faith, act like men, be strong.” Safe to say that this is one scripture Obama (a) was never taught; (b) never read; (c) never heard expounded from Wright’s pulpit; (d) never took to heart; (e) ALL OF THE ABOVE.
8: Psalm 91:11 (KJV) “For he shall give his angels charge over you, to keep you in all your ways.”
9: Matthew 6:9-13 (KJV) aka “The Lord’s Prayer.” Is there a single phrase from its Divine counsel and command which we should ignore? Deliverance from evil through God’s power, not our own, is prepared for all by those who WILL PETITION FOR GOD’S HELP.

And when the servant of the man of God was risen early, and gone forth, behold, an host compassed the city both with horses and chariots. And his servant said unto him, Alas, my master! how shall we do?

17 And Elisha prayed, and said, Lord, I pray thee, open his aeyes, that he may see. And the Lord opened the eyes of the young man; and he saw: and, behold, the mountain was full of horses and bchariots of fire round about Elisha.

NEWSFLASH TO EASTERN ENEMIES OF FREEDOM–OUR AWESOME GOD DOES NOT FIGHT FAIR! [Remember that David versus Goliath thing?]

If we, as Americans, join with our Israeli brothers TO ADVANCE LIBERTY, unseen hosts surround, strengthen, and lead us.

I think it would’ve been more apt for Obama to be lounging in his corner and the ref had the club and the face mask and was squaring off with Romney while the O looked on.

More to the actual situation.

Still good though. Just not biting enough about the Media.

They have committed treason in my view and thrown their special place in the Constitution in the trash.