Branco Cartoon – While the World Burns

Branco Cartoon – While the World Burns 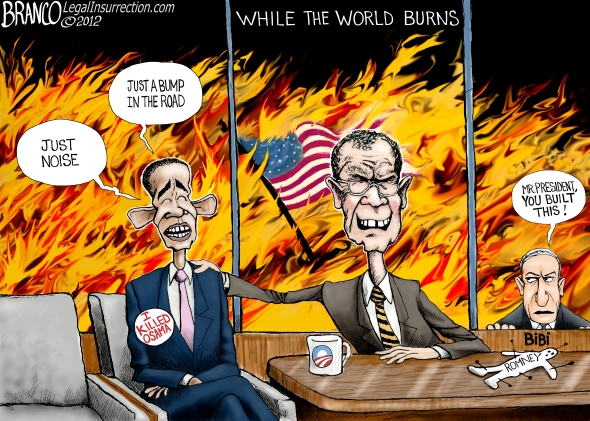 One of the best political cartoons I’ve ever seen!

Branco, you did it again! This ought to go viral. For you poker players, I hope there’s a “better hand” out there to beat this “pair”.

Pssst! Psssst! Barack! Dave! There’s a whOOOOle light of folks out there that aren’t happy. That “ain’t no thing” attitude isn’t cuttin’ it!

Great work! I had similar thoughts about Obama working at a canvas with Campaign and The View on the canvas and the world burning in the background. The Big Picture President.

Great satire on a real subject. Not once in the past month has the anointed one addressed any serious issue.

In fact, he’s sufferin’ from the ostrich syndrome and I doubt that his head won’t come out of the sand until January 20, 2013…

Grumpy…”Not once in the last month has the anointed one addressed any serious issue.” NOR, will he. Serious issues will ruin The Boy King. Thus, ‘The View’…Jay-Z….
Davey L..Sarah Jessica…etc, ad nauseum.
The world is on fire and Neville Nero Hussein Obam-Bam fiddles. And, the MSM-Lapdawgs are dutifully swooning, in-chorus, over the skewed polls and ignoring Rasmussen who was The MOST Accurate in ’08 & ’10. Scott has the candidates neck & neck, including Ohio & Iowa and the MSM-Let’s Swoon for The Messiah love songs continue unabated.

Sec of State Condoleezza Rice: “No country, no not even a rising China, can do more harm to us than we can do to ourselves”… unquote

If one wanted to destroy America, which can only be done internally, as no outside force can do. Then how would one go about doing it- It can only be done as the US Presidential leader, with full power and authority of the US Federal govt at your disposal..

Of course, this is exactly how it can be done and is being done.. but only with the knowledge and willing complicit cooperation from Congress, the US Supreme Court, and the mainstream media complex can this be done.. ie; Conspiring with our enemies abroad and within, against the American people and America itself, is a treasonous charge, which has not been encountered since the American Civil War.

All the evidence points in this direction.

Never before in American history has such a inside job of subversion and sedition, by those in power and authority, have been so fully engaged in by these anti-American forces from within the US govt., in American civil society- ie; the American media, as well as outside forces, have so conspired against America and the American People.

This time in US American history, with the seditious anti-American forces at work, will be forever a stark turning point in America as a Constitutional Republic, if not met head on and defeated.

6 Nov, will be that turning point of no return.

If Obama is defeated, especially with an absolute electoral mandate from the People, then the next US mid-term and general elections over the span of a generation, will be the reversal of anti-American liberalism, aka socialist marxism, and the healing restoration of America as it was founded over 236 years ago can be ensured.