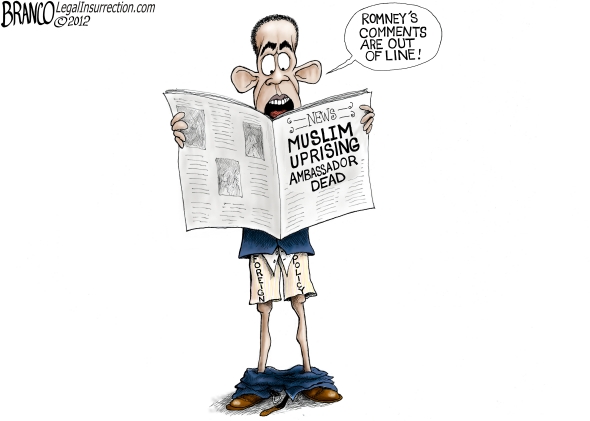 Branco is brillliant. Obama did get caught with his pants down. OTOH, I never underestimate the lengths this guy will go to to tear down America. He has now facilitated our enemies to unite against us. Isn’t that grand?

“Here’s another nice mess you’ve gotten me into”

Overheard at a WH breakfast, “Now, Romney is running his yap! Between him and that da** filemaker, I don’t know which is worse. Those two, the da** State Dept no knowing who our allies are, Bush, the da** Congress – why if it wasn’t for them my presidency would right. It would be right as rain!”

(disavow any knowledge as to my source)

I like Branco’s cartoon. Ramirez had a similar theme. As a certain paster said to his flock, these chickens are coming home to roost.

Reminds me of Dan Blather when he was caught pants around ankles lieing about G Bush the Younger. Let us all hope the Liar in Chief reaps a similar fate. “Whats the frequency Kenny?”

“ROMNEY FOR THE REPUBLIC”

In my soul I’ve seen the triumph,
I once doubted could ever come,
To dispel the clouds of fraud and fear,
Spread like sewage by false MEDIA’s son.
The Pretender was truly their bastard child,
Conceived by the lies they’d spun.

Those with eyes to see and ears to hear,
Pierced the veil false MEDIA made.
As it hid the past and distorted the present,
Of its child who worshipped the shade,
Of the enemies of honor and truth,
And the evil plans they had laid.

Rejoice my soul! Sing out my heart!
A true champion has appeared!
His honor has never been sold for lucre,
And his faith will not bow to fear—
But I now deeply bow in thanks,
That our pleas kind Heaven would hear.

Blessed with a wealth he made himself,
He can neither be bought nor bribed.
His sons and daughters burst with vigor,
And a true lady stands at his side,
Tempered by sorrows and service,
They will fight evil’s vicious tide.

With our Champion and Lady I call to you,
My friends and brothers in need.
Be not dismayed at the scope of our task,
Heed not the temptation of greed.
FOR WE SHALL SOON SEE a renewed Freedom Tree,
Though our bodies and spirits may bleed.

Poet’s Notes:
* I could provide, if time allowed FACTS AND SOURCES to support these joyful claims. E.g. Romney donated his entire inheritance to charity http://www.forbes.com/sites/ed…
* No rights reserved. I place this modest offering into the public domain.
* In my soul I have seen these things; I have knelt in thanks and wept in hope.
* The White House shall be cleansed of treachery and deceit.
* Our Nation’s star shall again shine bright to all the world; to HELP ALL THE WORLD.
* Victory over sin and despair shall be painful; our days tumultuous; yet we shall be blessed with strength and rejoicing at the end.
* Brothers, sisters, SING WITH ME; SHARE WITH ME; WORK WITH ME; VOTE WITH ME—and you shall tell your posterity you were fellow-servant and Patriot in this noble fight.
* New poems celebrating Ann Romney (“Gracious Lady”) and Paul Ryan (“Prodigy of Freedom’s Truth”) will be released in the near future. [Sister, Brother your perils and pains were preparations and not punishments. Unseen hosts of heaven yet bear you up.]
* Release your own poems and share your own visions of the Restoration of the Republic.
* ROMNEY AND RYAN WIN BIG IN NOVEMBER: I HAVE SEEN IT!