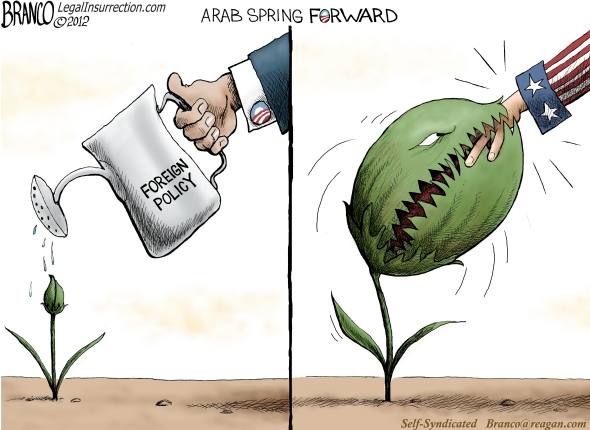 The cuffs are different … unfortunately there are cuff links. Brilliant!

That is exactly right.

President Obama does not want blame for his failed Arab Spring. The crowd in Cairo was chanting: “Obama, Obama, there are still a billion Osamas!” If he is so concerned with the feelings of the middle east, why spike the football so much over killing Osama bin Laden?

Mitt Romney did not cause this mess, it was murderous Islamic thugs that perceive Barack Obama as being weak and feckless.

The Second 9/11 has come,
and we’re stuck with
President Surrender Weenie!

Well done. Obama and his crew do the “watering”. And, the country reaps the dreaded harvest!

Because of the failed policies of OBOZO, the blood of US Libyan Ambassador Christopher Stevens and other US personnel, murdered by the islamofascists that are being appeased by OBOZO, is on his hands – along with that from Border Patrol Agent Brian Terry (a victim of OBOZO’s outrageous Fast and Furious failure). How many more Americans must die before THE WORST PRESIDENT IN AMERICAN HISTORY is thrown out of office and replace with a person of competence?

(Reuters) – General Martin Dempsey, the chairman of the U.S. military’s Joint Chiefs of Staff, spoke with Pastor Terry Jones by phone on Wednesday and asked him to withdraw his support for a film whose portrayal of the Prophet Mohammad has sparked violent protests – including one that ended with the death of America’s envoy to Libya.

“In the brief call, Gen. Dempsey expressed his concerns over the nature of the film, the tensions it will inflame and the violence it will cause,” Dempsey’s spokesman, Colonel Dave Lapan, told Reuters.

Scratch one American off Obama’s “Do Not Kill” list…

Somewhere I heard that by actual count, during the DNC the “killed Osama” ball was spiked 21 times.

And I read the mob in Egypt was chanting, “We are billions of Osamas”.

That cartoon is an effective piece of partisan advocacy. It’s appropriate, and it’s true as far as it goes.

It omits that the wishful thinking of the Bush administration helped bring us to where we are.

Whatever Bush did, he didn’t ideologically suck up to the world’s worst hate group, Islamic supremacists.

1. Whatever Bush did, he didn’t ideologically suck up to the world’s worst hate group, Islamic supremacists.

When conservatives correctly castigate Obama for bowing to the Saudi despot, they sometimes ignore that Bush kissed him and held hands.

Off the top of my head, I’ll say that, as with the economy, Bush left Obama a bad situation and Obama made it worse. A difference is that the financial crisis hit seven years after 9/11.

2. I suspect that the “Republican foreign policy experts” who are supposedly criticizing Romney have their reputations invested in the Bush record.

My, how quickly we forget.

You may lay as much blame for yesterday’s murders on Bush as you do on Obama. Bush’s weeks of waffling after 9/11, only to use it as an excuse for invading Iraq to prove he had bigger stones than Daddy, set us on this course.

I’m sick of Republicans praising Bush. He lit the fires. Obama poured gasoline on them.

1. Agreed. One could pursue your train of thought but this is not the right time for it. The Bush record should not become a distraction from Obama’s. That said, our opponents are indifferent to the distinction between truth and lies, and it is important that we have our facts straight.

2. In the spring I posted that, although Newt was my first choice in the primaries, I prefer the rotting carcass of a syphilitic camel to Obama. Therefore, my support for Romney has been somewhat…dutiful.

His stance on the latest 9/11 attacks is, for the first time, something for which I can support him proactively, not just by default.

Mitt was right. I urge conservatives and libertarians to resist the attempts of the Left and their RINO fellow travelers to stampede the electorate to the contrary.

Anyone with a working brain could see this “arch of history” leading to a radicalization of the largest Islamic nation in the Mid-East, and the destabilization of most of the rest.

Which neatly excluded the Obami, top down.

So many lives lost, broken, and benighted even more than before.

This is not mere incompetence, except on Hillary Clinton’s part (she really is dumb, as secretary of states go). This is all part of a plan.

The terrible truth is that we have a traitor to his Constitutional oath in the White House.

This is a plan to destroy Israel as a power in the Middle East. Israel will go down fighting.

This cartoon would also have served well during the final year of the Carter regime.

It’s all crumbling folks. Let’s hope that Mr. Romney can pick up the pieces and put ol’ Humpty back together again.

Our future depends on it…

Obama has a small army of radicals behind him turning his anti-American ideology into policy.

Romney will have a huge army of Americans behind him.

I sure hope that you are right but at the same time I recognize that a large portion of the American public has been dumbed down to imbecile status.

Thank the liberals, democrats, unions and academia for this malady. All deny the existence of common sense and have no logical cognitive capabilities.

“What a revoltin’ development..” as per Willim Bendix (Joe Riley)

It is as frightening as it is amazing what a substantial portion of our populace is out to lunch.

Now is as good a time as any to be reminded:

<"Islam has a proud tradition of tolerance."

"We will convey our deep appreciation for the Islamic faith, which has done so much over so many centuries to shape the world for the better, including my own country."

"As a student of history, I also know civilization's debt to Islam."

"Islam has demonstrated through words and deeds the possibilities of religious tolerance and racial equality."

"And since our founding, American Muslims have enriched the United States."

"And I consider it part of my responsibility as President of the United States to fight against negative stereotypes of Islam wherever they appear."

"Moreover, freedom in America is indivisible from the freedom to practice one's religion. That is why there is a mosque in every state of our union, and over 1,200 mosques within our borders. That is why the U.S. government has gone to court to protect the right of women and girls to wear the hijab, and to punish those who would deny it."

"And one of the points I want to make is, is that if you actually took the number of Muslim Americans, we'd be one of the largest Muslim countries in the world…And so there's got to be a better dialogue and a better understanding between the two peoples."

“In the brief call, Gen Dempsey expressed his concerns over the nature of the film, the tensions it will inflame and the violence it will cause. He asked Mr. Jones to consider withdrawing his support for the film,” Pentagon spokesman Col. Dave Lapan said.

You’d figure he would have something better to do-

Like helping the dems celebrate the Russian Navy/ Black Sea Fleet with recon pictorials for their convention.

The DNC just keeps on giving!

Nothing worse than seeing the chairman of the Joint Chiefs of Staff go begging for O’bammy’s case.

Time for a clean sweep in DC including the pentagon leadership in and out of uniform.

It almost makes me wonder why I ever bothered to serve…

Excellent as always.
On another note, how I wish she were in a leadership position. She has more “cojones” than the entire administration together.

The President is too a uniter. He’s gotten the Arabs and the Israelis to agree on something. Neither side likes him.

[…] update! Hoo boy, does this cartoon say it. But it’s Ogabe’s hand being bitten harder, because of the inevitable and apt Carter […]

All I know is that any responsible news organization had better not send any female reporters to cover the “demonstrations” following Friday prayers in Egypt.

After watching her today, I guess I wouldn’t mind if they sent Christiane Amanpour-

…and make her wear a bikini!

Well, thank you very much for that searing visual.

Filed under “you can’t make this stuff up”

Here is the photo and heading relative to the topic on the Detroit Free Press website:

And, here is the iconic “Islamic rage boy”

This is the MSM.

You are supposed to believe that pic of that person personifies “Metro Detroit Muslim, Arab leaders condemn attack in Libya”

I loved the equating of the Obama foreign policy with “Little Shop of Horrors” Is Hillary the dentist?